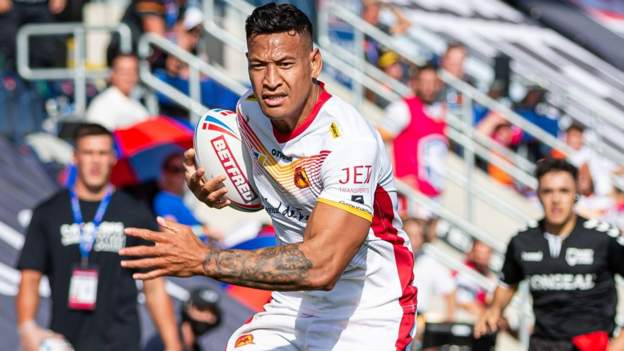 Catalans Dragons bounced back from defeat by St Helens as they ran in seven tries to come from behind and beat Castleford 40-14 in Super League.

Michael Shenton put Cas ahead with two tries in two minutes but Tom Davies hit back with his first Catalans try.

And Catalans went in on top at the break thanks to quick tries from Alrix Da Costa and Israel Folau.

Second-half tries from Ben Garcia, Joel Tomkins, a second Davies score and one from Jason Baitieri wrapped up the win.

The win lifts Catalans up to fourth in Super League as they sealed their fourth victory of the season, while Castleford drop to fifth after defeat in their first game back since Super League resumed and Warrington’s comprehensive victory over Hull KR.

Prior to kick-off, and for the second week in a row, Catalans centre Folau did not join in as players from both sides took a knee in unison to show support for the Black Lives Matter movement.

Folau, who scored his second try in as many games against Castleford this season, was also joined by team-mates Benjamin Jullien and Sam Moa in not taking a knee this time around.

Castleford were without prop Liam Watts, who injured his arm in a saw accident at home earlier this week, and were left without Peter Mata’utia for the final 10 minutes of the first half after he was sin-binned for a reckless tackle on Samisoni Langi.

Mata’utia’s indiscipline proved costly as within moments of his yellow card, Da Costa and Folau combined to edge Catalans ahead in his absence and give them a lead they would not relinquish as they scored 40 unanswered points.

“We never got our game together. Playing last week probably outweighed anything else.

“We’ve had a look at the six-again rule now and what they look like. We practiced it in training but to get out on the field was pretty important.

“That will benefit us and hopefully we’ll have some more players to come back in next week.

“The boys worked manfully but some players hadn’t played for a long time.”

“We were 14-0 down when Jesse Sene Lefao drops ball and at 20-0 it could have been a different game.

“We looked at aspects of our game from last week and, right from the start, we were together as a team for the minute’s silence and the 13 seconds for Black Lives Matter.

“We showed our respects and the team showed how together they are on that.

“There were major questions asked of us last week, more by ourselves. We were disappointed by that, and we were hurt by that, but it wasn’t the end of the world. We learned from it and we will go again next week.”

On Israel Folau: “I hope he gets better and he’s determined to. He’s got the potential to improve.

“I think there is a lot more to come, he works really hard.

“He was great today but his wife is due to give birth any time now and he nearly didn’t get on the plane. Thankfully he did.”