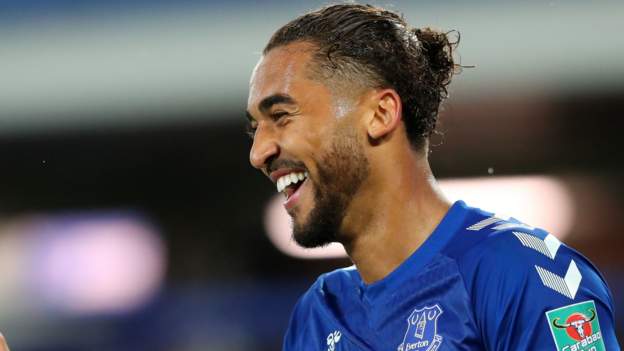 Everton striker Dominic Calvert-Lewin is in his first England squad after being selected for this month’s matches against Wales, Belgium and Denmark.

Mason Greenwood and Phil Foden, who were sent home from Iceland last month after breaching coronavirus quarantine guidelines, have been left out.

Leicester’s Harvey Barnes and Arsenal defender Bukayo Saka have also both been picked for the first time.

Harry Maguire is included after being withdrawn from the last squad.

Manchester United captain Maguire, 27, was given a suspended prison sentence on the Greek island of Syros after being found guilty of aggravated assault, resisting arrest and repeated attempts of bribery.

The centre-back maintains his innocence and has appealed against the decision, which nullifies the conviction.

England play Wales in a friendly on 8 October, before Nations League fixtures against Belgium and Denmark on 11 and 14 October respectively, with all three games being played at Wembley Stadium.

Calvert-Lewin is awarded his first call-up by Gareth Southgate after scoring eight goals in five appearances in all competitions so far this season, including two hat-tricks.

“I’m a very, very proud man to get this first England call,” said the 23-year-old.

“I phoned my mum and my dad, and my mum burst into tears.

“It’s something we’ve spoken about since I was a young boy. To get here now and get the call-up is a dream come true. I’m very happy.”

Southgate said: “Dominic is a player whose all-round game we have liked for some time. What he’s added over the last 18 months is goals and for a striker that’s critical.

“He’s in a really rich vein of form. He thoroughly deserves his opportunity.”