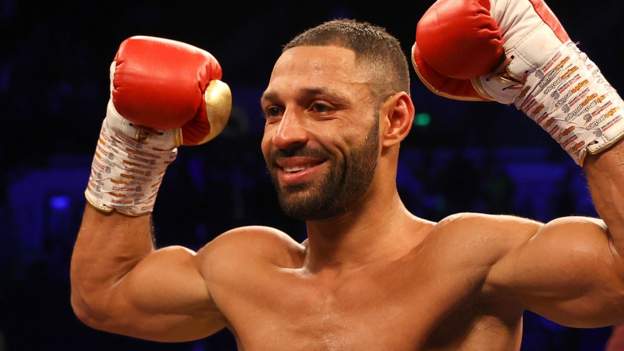 Kell Brook says he is a “monster with self-belief” as he prepares to face WBO welterweight champion Terence Crawford – with a trainer he met on Instagram.

Britain’s Brook, 34, challenges American Crawford – who is unbeaten in 36 bouts – on 14 November in Las Vegas.

Brook is not working with regular trainer Dominic Ingle because of the coronavirus pandemic and instead will have Carlos Formento in his corner.

The Sheffield fighter said Ingle was unable to travel to his training base in Spain because of concerns about Covid-19 and the possibility of having to quarantine.

Instead he recruited Formento, who was based a short flight away in the Canary Islands.

“I had never worked with him previously because Dominic is my trainer number one. I messaged him on Instagram and basically said ‘let’s work together’,” said Brook.

“The first day, I knew that we gelled unbelievably. He is basically obsessed. He is passionate. And that’s everything I need in this fight.”

Former IBF welterweight champion Brook was last in action when he knocked out American Mark DeLuca in the seventh round in February.

But the Sheffield fighter’s career has been derailed in recent years after back-to-back defeats by Gennady Golovkin and Errol Spence Jr, which left him with serious eye injuries.

In 33-year-old Crawford, Brook will face an opponent considered one of the best pound-for-pound fighters in the world.

Brook says he “doesn’t feel the pressure” of a fight where victory would be the “best, best feeling in the world”.

“I’ve got to applaud Terence Crawford for taking this fight, because he is in there with a monster with self-belief,” he said.

“He is one hell of a fighter but a smaller man naturally to me. I’m a dangerous man, a big welterweight and a force to be reckoned with.”

Brook needed metal plates inserting during eye surgery following the back-to-back defeats by Golovkin and Spence in September 2016 and May 2017.

“Everybody has been writing me off. I’m going against everyone,” said Brook, who is irritated by claims he is only fighting for one last pay day.

“This fight is for me. Nobody else bar me.”