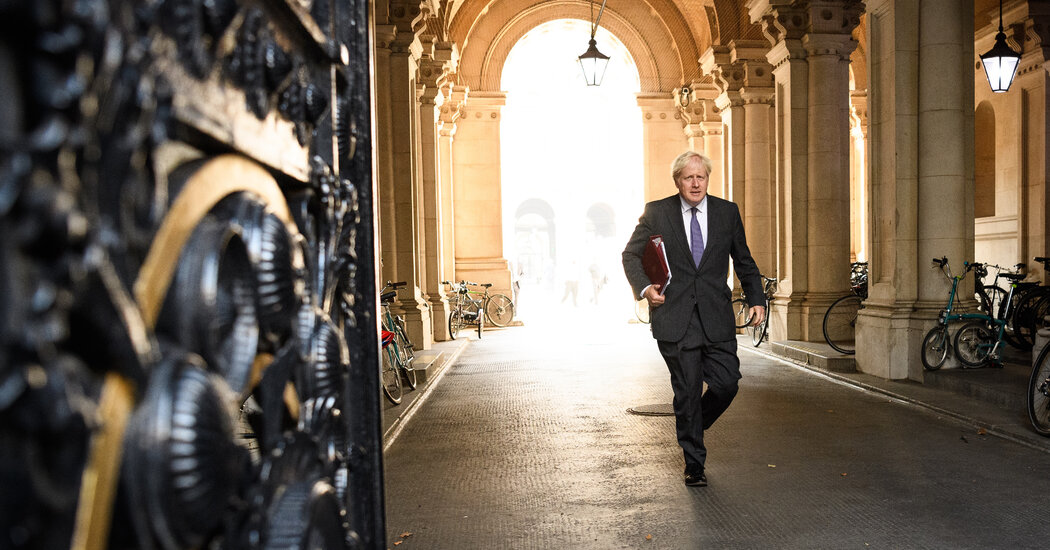 LONDON — Britain’s lengthy divorce proceedings with the European Union entered a make-or-break phase on Saturday as Prime Minister Boris Johnson and the European Commission president agreed that the two sides shared enough common ground to aim for a final settlement.

The announcement, after a video call between Mr. Johnson and the Commission president, Ursula von der Leyen, fell well short of a breakthrough, but neither was it a breakdown. Negotiations for a long-term trade agreement, which have ground on inconclusively for months, will now intensify as the two sides scramble to meet a deadline that would allow a deal to be in place on Dec. 31.

The two leaders agreed that “progress had been made in recent weeks but that significant gaps remained,” according to a statement from 10 Downing Street. “They instructed their chief negotiators to work intensively in order to try to bridge those gaps.”

Britain formally left the European Union at the end of January. But under the terms of its withdrawal agreement, it remains part of the bloc’s customs union and single market until the end of the year while the two sides hammer out permanent arrangements on issues like fishing quotas and state aid to industries.

While the issues in dispute are technical and even at times tedious, they have profound implications for Britain’s future relationship with the European Union. The risk of a rupture is as big as it was this time last year, when negotiations on the withdrawal agreement hit a similar moment of truth.

Mr. Johnson’s intervention in the talks is an important, if long-expected, shift from working-level negotiators to top leaders. In addition to the prime minister and Ms. von der Leyen, much will depend on the role played by Chancellor Angela Merkel of Germany and President Emmanuel Macron of France.

Each has very different political calculations. Mr. Macron’s polling numbers have swooned in recent weeks as French voters increasingly disapprove of his government’s handling of the coronavirus pandemic. He faces an election next year, which raises questions about how much ground he will be willing to give Britain on politically sensitive issues like fishing rights.

Ms. Merkel, in the twilight of her long tenure, has her eye firmly on securing her legacy as the de facto leader of Europe. A bitter breakup with Britain, especially when Germany holds the presidency of the European Council — the bloc’s executive arm — would mar that record and she seems determined to avoid that outcome.

“You see that now with Merkel still being very cautious but constructive, and the Macron team being far more aggressive and even hostile toward the U.K.,” said Mujtaba Rahman, a former economist at the European Commission who is now an analyst at the political risk consultancy Eurasia Group.

Yet even Ms. Merkel has shown impatience with what many in Europe perceive as Britain’s needlessly provocative tactics.

Mr. Johnson recently introduced a bill that would override parts of the withdrawal agreement relating to Northern Ireland. His own aides acknowledged that it would be a violation of international law, and the European Union bought legal action against Britain this past week.

“We’ve suffered a certain setback with the breaching of the agreement we reached on Northern Ireland,” Ms. Merkel said on Friday in language that, for her, was more frank than usual. “I have to say simply: That’s bitter.”

With time running out, the British have been pressing for an opportunity to take their case higher up the political food chain. Last year, Mr. Johnson successfully brokered an agreement on Britain’s withdrawal in talks with Leo Varadkar, Ireland’s prime minister at the time, and seems confident that he can do so again.

Things are harder this time, however.

The most contentious points in last year’s withdrawal agreement mainly affected a single country, Ireland, while these negotiations on trade affect many more. The big economies, like France and Germany, have much at stake, and red lines they will not cross.

Among the main sticking points are fisheries, with most analysts saying that to get a deal, the European Union would have to accept lower quotas for catches in British waters. The new quotas could be phased in, however, giving continental fishing fleets more time to adjust.

At the same, Britain would have to give ground on the thorny issue of state aid.

The European Union fears that an unfettered British government could subsidize its companies and dump goods in the continental European market. The bloc wants the British to specify which antitrust rules it will enforce domestically, and to agree on a mechanism to resolve disputes with the E.U.

Britain, however, sees it as a matter of national sovereignty. Mr. Johnson’s powerful adviser, Dominic Cummings, wants Britain to have a free hand to promote artificial intelligence and other the high-tech industries.

Yet the pandemic has heightened pressure on Mr. Johnson to compromise.

Not only has the British economy taken a big hit, but his handling of the pandemic has been widely criticized. With lawmakers in his own Conservative Party increasingly rebellious, Mr. Johnson would run an acute political risk if he allowed the absence of a Brexit trade deal to produce chaos at Channel ports in January.

In interviews with the BBC on Saturday before his call with Ms. von der Leyen, Mr. Johnson struck a more optimistic tone then he has in recent weeks, when he talked openly about a no-deal Brexit.

The ingredients for a deal were “all there,” though he added, “It’s up to our friends and partners to be common-sensical.”

Mr. Rahman said he expected more fireworks in the weeks to come, and he did not rule out a collapse in the talks. But he predicted that in the end, Mr. Johnson would compromise to get an agreement.

“The world around him is melting down, and he needs a win on Brexit,” Mr. Rahman said.

US is ’rounding the corner into a calamity,’ expert says, with Covid-19 deaths projected to double soon

Los Angeles County, where the virus is surging, urges residents to stay home.