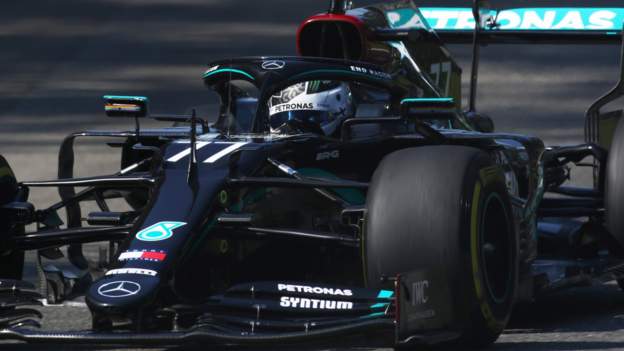 The Dutchman – second in the championship, between Hamilton and Bottas – lost control through the fast Ascari chicane and spun into the wall.

Verstappen managed to return to the pits while the session was red-flagged and then rejoin. He ended up fifth.

Alpha Tauri’s Pierre Gasly also had a spin and came off, his happening at the Roggia chicane at the end of the session, with the Frenchman also able to rejoin the track.

The drivers were already beginning to practise slipstreaming, which is expected to be a major feature of qualifying on Saturday afternoon because of the lap-time gain from having another car punch a hole in the air down Monza’s long straights.

Last year, several drivers ended up missing out on a lap time at the end of qualifying as they crawled around trying not to be the car at the front of the queue which does not get a slipstream.

Gasly was sixth fastest, on the medium tyre like Kvyat, ahead of Racing Point’s Sergio Perez, McLaren’s Lando Norris, Renault’s Daniel Ricciardo and the second McLaren of Carlos Sainz.

Ricciardo, who is fancied to be competitive this weekend after qualifying fourth in Belgium last Saturday, was on the medium tyre, as was the fastest Ferrari of Charles Leclerc.

The Italian team are expecting a difficult weekend again at their home race because Monza exposes their lack of straight-line speed.

Leclerc’s team-mate Sebastian Vettel was down in 19th place.