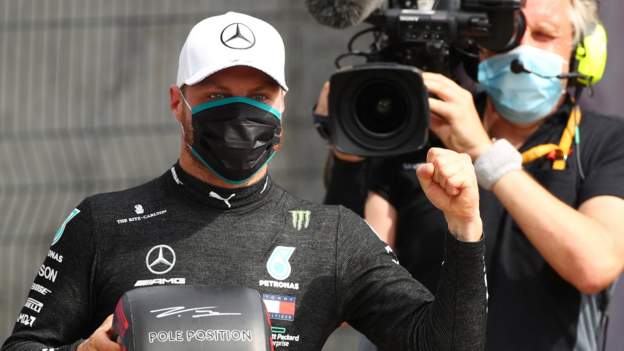 The Finn pipped Hamilton by just 0.063 seconds on his final lap at Silverstone to take his first pole since the season opener in Austria last month.

It could be an important moment for Bottas, who needs to try to reduce Hamilton’s 30-point championship lead.

Renault’s Daniel Ricciardo was another to put in a strong performance in fifth place, ahead of the second Racing Point of Pierre Gasly.

Bottas rises to the occasion

Bottas saw his World Championship hopes take a hit at the British Grand Prix last weekend – a puncture with two laps to go dropped him out of the points when he had been cruising to second place behind Hamilton, who survived his own last-lap puncture to win.

Bottas needed to bounce back this weekend, and he has put himself in a great position to do so with pole position.

Hamilton was quicker by nearly 0.2secs on their first runs in the top 10 shootout – when they used the soft tyre – but when they switched to the medium for the final runs, the Briton found less time.

“It feels good. We made good steps on the set-up from last weekend, that’s why the qualifying performance was better. Amazing car to drive. It’s so quick,” said Bottas.

“Of course mentally when you are starting from pole you can only aim to win. The pace is there. First job is to get off the line, and the mentality is try to win it. That’s it.”

Hamilton said: “Valtteri did a good job and deserved the pole. For me, it wasn’t a perfect last lap.

“I don’t think many people can manage it on a one-stop. It’s highly unlikely.”

Hulkenberg’s Formula 1 career looked to be at an end after last season – his legacy largely being known as the best driver never to finish on the podium.

He was replaced at Renault by Esteban Ocon for 2020, and failed to get a paid drive elsewhere on the grid.

The German is only at Silverstone after replacing Perez at the last minute last weekend after he had tested positive for coronavirus, and again was recalled late on Friday when the Mexican was still not clear of the virus.

Last week, a technical problem meant he did not start the British Grand Prix. But after a strong performance in qualifying, Sunday’s race could be his last chance to spray some champagne in F1.

Ricciardo was equally impressive, using the medium tyre throughout the final session to take fifth, underlining Renault’s improvement in form after some recent upgrades to their car.

His team-mate Ocon did not make it into the top 10 and qualified 11th, but was penalised three places on the grid for impeding George Russell’s Williams.

Ferrari’s Charles Leclerc took eighth, a drop of four places over last weekend, but although that was a disappointment, he fared better than team-mate Sebastian Vettel.

The four-time world champion, who had been a second slower than Leclerc in qualifying a week ago, was closer this time, but still lagged behind by 0.4secs and could manage only 12th, not making the final qualifying session.

Lando Norris was the lead McLaren in 10th place, while George Russell took 15th after getting in the second session for the fourth time in a row.

Coronavirus: How much will it cost the UK?

Covid in Scotland: Hospitality curbs extended for another week