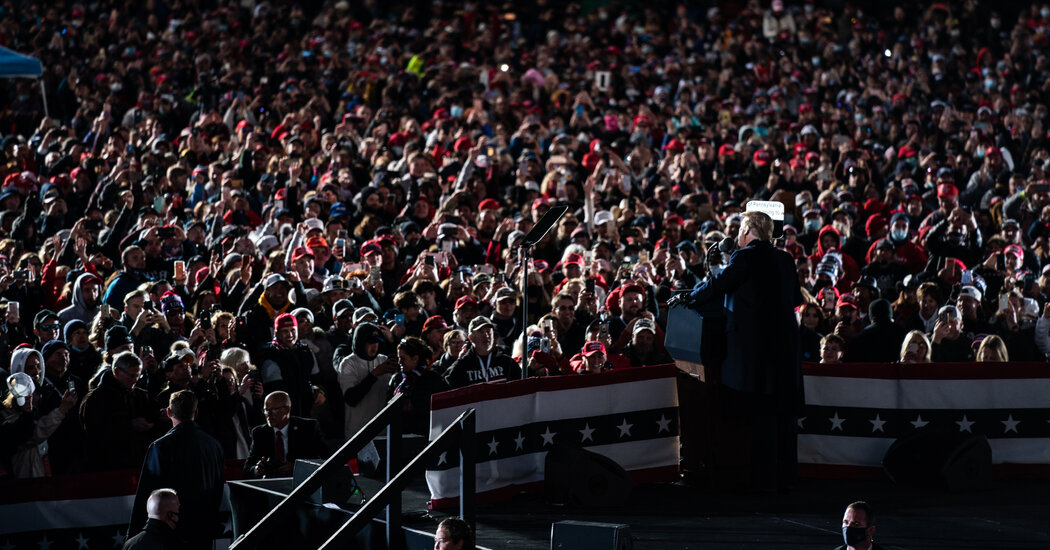 Mr. Trump enters his rallies to pounding music and crowds roaring their approval — with few people wearing masks — as he throws Make America Great Again hats into the stands like T-shirts at a basketball game. Aides say that he feeds off the energy of his audiences, and that the rallies have convinced Mr. Trump that he will win despite polls showing him trailing in almost all of the competitive states.

“A great red wave is forming,” Mr. Trump said on Saturday in Newtown, Pa. “As sure as we’re here together, that wave is forming. And they see it, they see it on all sides, and there’s not a thing they can do about it.”

Jason Miller, a senior adviser for Mr. Trump’s campaign, said the president “loves campaigning” and is always eager for “the input from people outside the Beltway.”

But Mr. Trump is less enthusiastic when the input comes from smaller crowds. On Saturday morning, as he spoke to only about 300 people at his first Pennsylvania rally of the day, Mr. Trump was lethargic and subdued, as if he were privately thinking to himself: Yawn.

The night before, the president stalked off the stage in Rochester, Minn., after speaking for less than 30 minutes before a tiny crowd in a state where gatherings are limited to no more than 250 people. Mr. Trump claimed that there were “at least 25,000 people who wanted to be here tonight,” and said that his supporters were “barred from entry by radical Democrats.”

Mr. Biden rallied supporters in Michigan on Saturday and in Pennsylvania on Sunday, but with a twist: His supporters attend his rallies in their cars to ensure social distancing in the midst of the pandemic.

Earth is closer to supermassive black hole than we thought