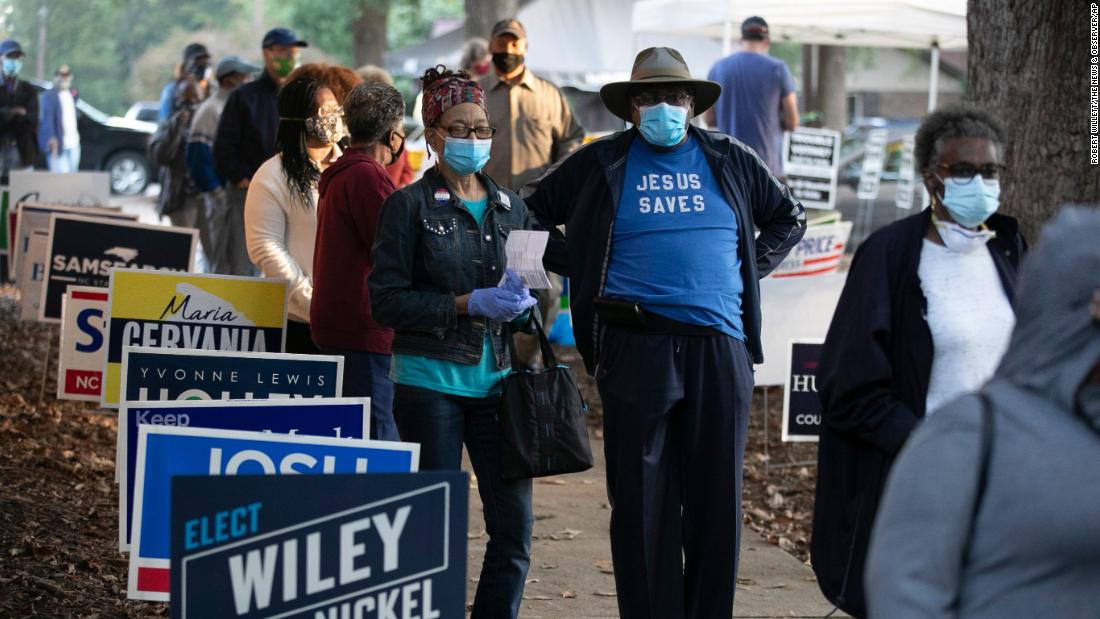 “This election is more important than the 2008 one for Barack Obama. That 2008 one was for change and making history. This election is for saving the US,” Richards said, citing concerns about racial justice and suppression of Black voters. “The racial divide that is going on, we need someone who is going to be a leader for everyone, not just their base.”

Across the country, Black voters are turning out in huge numbers. The stakes this year are especially high, they say, and nothing less than their health and safety is on the ballot.

Many said this feels like the most important election of their lifetimes.

During a raging pandemic that has killed more than 223,000 Americans and ravaged Black communities, many Black voters could have mailed in their ballots. But after recent headlines about postal workers dumping undelivered mail and President Donald Trump’s debunked claims questioning the integrity of mail-in ballots, many don’t trust that process.
“The pandemic did not scare me,” Richards said. “The way that 45 (Trump) was talking about mail-in voting and lying about it, I wanted to do it (vote) in person.”

So far this fall, African American voters are rushing to the polls at much higher rates than they did four years ago, when Hillary Clinton was on the ballot.

By Tuesday, more than 601,000 Black Americans had voted early in Georgia compared with about 286,240 two weeks before the 2016 election. In Maryland, about 192,775 had voted compared with 18,430. And California had over 303,145 — up from more than 106,360 two weeks before the election four years ago. That’s according to Catalist, a data company that provides analytics to Democrats, academics and progressive advocacy organizations.

Keith Green, 65, went to the polls last week in Overland Park, Kansas, to vote in person — for several reasons.

“We have a racist President who lies too much,” he said. “He keeps on saying he doesn’t trust the Democrats. Well after everything that has gone on with the ballots, I don’t trust the Republicans.”

Trump has repeatedly said he’s done more for African Americans than any president since Abraham Lincoln. As evidence, he has cited low unemployment among African Americans, criminal justice reforms and increased federal funding for historically Black colleges and universities.

But most Black people aren’t convinced. Gallup polling over the summer found that 87% of Black Americans disapproved of his job as President.

Green said the Trump administration has left him worried about the future for his daughter and his two grandchildren. He believes Trump has emboldened White supremacists and set the nation backwards on the path for civil rights and equality.

“The last four years have been so bad,” he said. “We can’t stand four more years of that.”

Other concerns include health care and the makeup of the courts

Wilburn Wilkins, 61, woke up early on October 7, put on two masks and headed to a voting center in Joliet, Illinois, with his wife. Although the retiree has pre-existing conditions, he wanted to vote in person.

“We have a President who is totally tearing apart our whole democratic Constitution,” Wilkins told CNN. “Many people are dying because he is ignoring the Covid pandemic, ignoring the fact that people are unemployed, need financial resources. We need a change.”

Like Green, he believes the White House’s decisions have undermined Black people and other minorities.

“The nomination of a conservative to the Supreme Court, stacking of lower courts in order to have cronies to carry out conservative ideas, most likely will affect Black and Brown people,” Wilkins said. “They’ll affect things such as civil rights, Obamacare — all of these things have the potential to negatively impact minorities. “

There’s a lot at stake in this election, said playwright and composer Nolan Williams Jr., 51, who lives in Washington, DC, and plans to vote in person on Election Day.

Williams has composed an anthem, “I Have a Right to Vote,” to raise awareness of voter suppression and motivate Black people to cast their ballots. It features original “Hamilton” cast member Christopher Jackson, entertainer Billy Porter and others reciting the words of abolitionist Frederick Douglass, the late Rep. John Lewis and the late Justice Ruth Bader Ginsburg.

“For African Americans in this country, voting is the most effective way for us to effect the change we seek. Given the events of this summer, it is crucial for our community to translate our social protests into political action,” Williams said, referring to the deaths of George Floyd and Breonna Taylor and the unrest that followed.

“Health care, fair housing, including equal access to home loans, poverty, the environment, meaningful reforms to our justice system, and improvements in community policing are all issues that make this election uber critical,” he said.

Some voters are mistrustful after the 2018 election

In Georgia, many Black voters say they have been motivated to vote in person by what happened in 2018, when Republican Brian Kemp ran against Democrat Stacey Abrams for governor while serving as the state’s chief elections officer.
Kemp, who as Georgia’s secretary of state had promoted and enforced some of the nation’s most restrictive voting laws, was accused repeatedly before and during the campaign of seeking to suppress the minority vote. Kemp won narrowly, and Abrams argued that he had used his position to suppress Black votes.

Kee-Kee Osborne, 42, of Mableton, Georgia, said that’s one of the reasons she voted in person this month — to make sure her voice counts.

“For me, the outcome of this election will be the difference between truth and deception, decency and dishonor, inclusion and intolerance,” said Osborne, who works as an information technology manager.

“The words, actions, and policies from the current (Trump) administration have deepened the marginalization of Black people over the last four years. It is imperative for our community to be engaged in the process because we have an opportunity to vote for change on every level.”

In Los Angeles, business manager and travel blogger Nancy Gakere, 47, woke up early one day this month to drop off her ballot. She also signed up for a tracking service to ensure her vote is counted.

“I wanted to make sure I personally deliver my vote,” she said. “This election is so important to Black people because of current events like the killing of George Floyd and Breonna Taylor (and) the way the coronavirus pandemic has disproportionately affected Black people,” she said. “This has exposed the long-standing institutional racism and racial inequalities that exist in America.”

But for Gakere, the most important issue is preserving health care under the Affordable Care Act.

“We have family members with pre-existing conditions, and we feel that it’s at risk of being overturned,” she said.

With Election Day on the horizon, Wilkins has a message for Black voters.

“Many people have died for us to have that right to vote. We cannot take it for granted. This is a privilege that was not offered to our ancestors,” the Illinois man said. “They’re trying to stop us from voting right now by gerrymandering, intimidation, voter suppression in plain sight — all things that have been done in the past to our ancestors. That tells you how important it is for us to vote.”