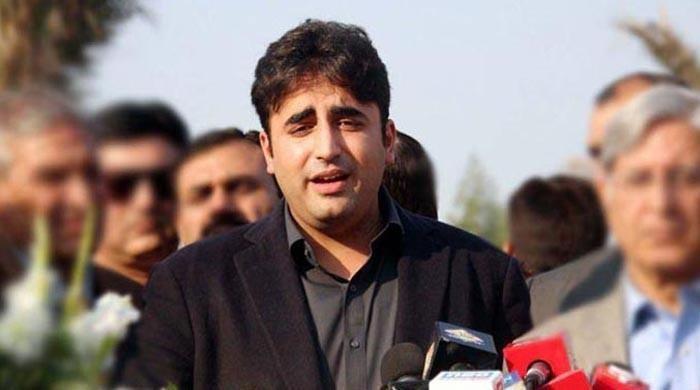 PPP chairman Bilawal Bhutto Zardari on Monday led a a protest against alleged rigging in the Gilgit Baltistan polls, claiming that his party’s elections were “stolen”.

“My election has been stolen,” he wrote on Twitter. “I will be joining the people of Gilgit Baltistan in their protest shortly.”

A short while later, the PPP chairman addressed political workers at a gathering. “Your mandate has been stolen,” he told them. “Our candidates were pressurised,” he said, alleging that the polls were rigged.

“After seeing our successful electioneering in the region, they [PTI] became nervous. Federal ministers and even Prime Minister Imran Khan came to campaign.”

Bilawal said election rules were violated but the GB Chief Election Commissioner sided with the government and targeted Opposition parties. “Our candidate lost by two votes. They are trying to steal three seats but we will not let them.”

The PPP chairman said the “puppet government” was did not even expect they will win the elections. “They don’t even have a candidate for the chief minister’s post.”

The Imran Khan-led PTI is emerging as the single largest party in the hotly contested polls in Gilgit Baltistan. According to unofficial and unconfirmed results, the ruling party grabbed nine seats while the Bilawal Bhutto Zardari-led PPP came second with three victories. Meanwhile, the PML-N, the JUI-F, and the MWM have won one each while Independent candidates secured six.

As many as 330 candidates, including four women, were vying for 23 general seats in the third legislative assembly of the northern region.

Citizens, wearing facemasks and observing social distancing, lined up outside polling stations in bitter cold across the region, many voters braving heavy snowfalls.

Both PML-N and PPP made rigging allegations ahead of the poll. On Sunday, PPP senator Sherry Rehman said some election observers were not being allowed to monitor GB elections.

“There were more than 600 members of the Free and Fair Election Network (Fafen) monitoring the elections, but some have been removed from the polling stations,” she said.

Sherry Rehman said members of Fafen should have been given full access and all observers should have been allowed inside during the counting of votes as their absence created more questions and controversy. She said it is also important that the EC takes strict action. She said that the people who came to cast their votes came to know that their votes were already cast through postal ballot. “It is concerning and the PPP has informed the EC.”

49% Pakistanis say they will not get coronavirus shot, survey reveals