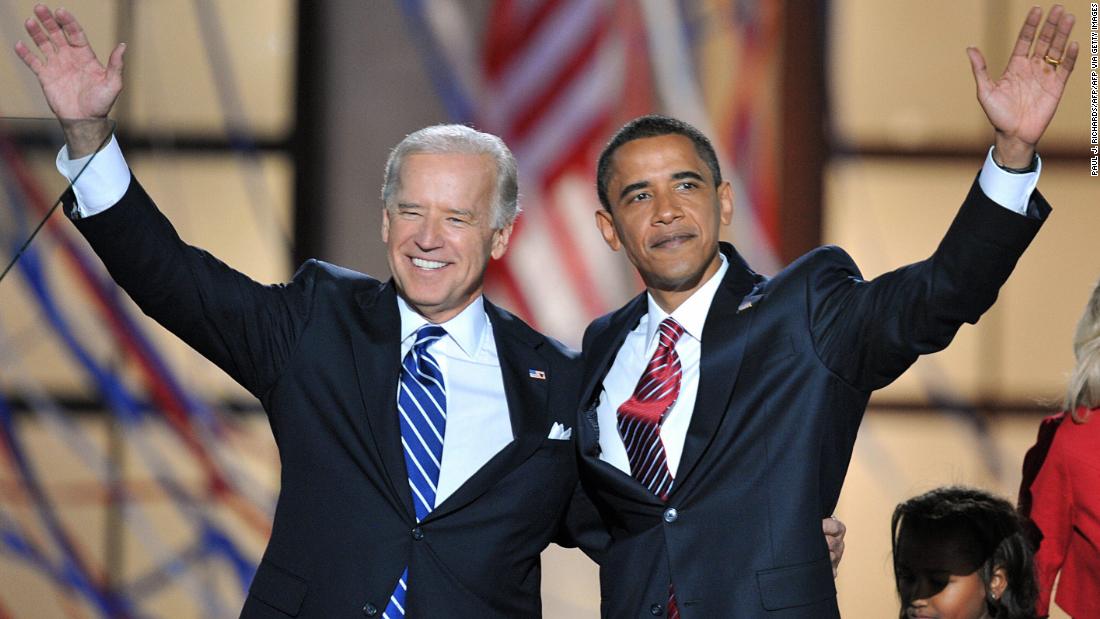 “My family is so proud to call ourselves honorary Bidens,” Obama said, surprising his vice president by presenting him the Medal of Freedom in the closing days of their second term. “One of the best things of these eight years is that we’re forever bonded as a family.”

It didn’t start out that way.

As Biden enters the final stages of choosing a running mate of his own, it’s the relationship with Obama that’s enlightening — and complicating — his search. Several Biden friends say he is looking to replicate the rapport he formed with Obama, seeking a governing partner whose loyalty is unquestioned.

But when their personal story began in 2008, as Obama invited Biden to interview for the job during a secret meeting in a Minneapolis hotel 12 years ago this week, the two barely knew each another. Obama thought Biden talked too much, he told aides at the time, and Biden still wasn’t certain Obama was up to the task.

“They were fairly distant,” said David Axelrod, chief strategist for the Obama campaign. “It wasn’t cold. It wasn’t hot. There just wasn’t a relationship.”

Their connection revolved around two things: a short stint together in the Senate, where Biden had the upper hand as chairman of the Foreign Relations Committee, and their brief rivalry in the Democratic primary, where Obama easily vanquished Biden and other more experienced challengers.

But looking back, Biden’s partnership with Obama — at the end of their time in the White House — offers one of the most instructive guides for how he’s making this decision.

He isn’t particularly close with most of the women on his list, people familiar with the search say, so he’s taking considerable time studying vetting materials, watching their television interviews and following his own gut with the goal of finding someone whose loyalty he believes can blossom into a true governing partnership.

“It’s been very orderly. Every one of the women I’ve — we’ve — interviewed is qualified,” Biden said in an interview released Thursday. “And I’ve narrowed it down.”

His campaign has been teasing the decision, imploring supporters to sign up to learn the news themselves, along with joining the first fundraiser between Biden and his running mate that is expected to be next week.

Since pledging five months ago to choose a woman to join his ticket, 11 potential vice presidential candidates have undergone vetting of financial records, personal backgrounds and medical histories. The search is conducted in secrecy, with even many senior-level campaign aides not directly privy to what Biden is thinking.

But conversations with Democrats close to the process, along with party officials and donors who have also weighed in, suggest California Sen. Kamala Harris, former Obama National Security Adviser Susan Rice and Michigan Gov. Gretchen Whitmer are among those he’s seriously considering as he nears the end of his search.

While Whitmer’s name had receded over the summer from some lists of prominent contenders, Biden has always found her impressive, officials said, and he has continued to build their relationship. Two Democrats familiar with the search told CNN on Thursday that she remains in serious contention.

He also is believed to be considering California Rep. Karen Bass, chairwoman of the Congressional Black Caucus, Sen. Elizabeth Warren of Massachusetts and Sen. Tammy Duckworth of Illinois, people familiar with the search say.

This consideration of Whitmer suggests Biden has yet to decide whether to choose a woman of color, which many supporters and Black leaders have urged him to do, in the wake of summer protests over police brutality and systemic racism.

With steep challenges from coronavirus to the economy awaiting the next president, friends of Biden tell CNN he’s intent on finding a governing partner, not simply a campaign one.

Yet one moment from the campaign trail still reverberates loudly: When Harris sharply questioned his Senate record and opposition to federally-mandated busing to desegregate schools during a debate last summer in Miami.

From the outside, that moment has hung over the vice presidential selection process, fueling criticism and praise of Harris, but Biden brushed it aside once again on Thursday.

“Now, I don’t hold grudges and I’ve made it really clear that I don’t hold grudges,” Biden said in an interview conducted at a convention of Black and Hispanic journalists. “I think it was a debate. It’s as simple as that. And she’s very much in contention.”

Not holding grudges is another lesson from his time with Obama, who in 2007 Biden once referred to as “articulate and bright and clean and a nice-looking guy.” Biden apologized and went on to serve alongside the nation’s first Black president.

This time, of course, the dynamic is different. If he defeats Trump, he will be the commander-in-chief, but his vice president will instantly become a history-making figure in her own right, likely seen as the next leader of the Democratic Party.

But despite that, Biden has still suggested he’s searching for someone who can ultimately forge a relationship like the one he did with Obama.

During the Medal of Freedom ceremony, just days before they left office in January 2017, Biden noted that both men were taken aback at how quickly their bond formed.

“About six months in, the president looks at me and says, ‘You know Joe, you know what surprised me? That we’ve become such good friends,'” Biden said, recalling a private conversation he had with Obama during one of their weekly lunches.

“Surprised you!” Biden said with a laugh, adding that he, too, was pleasantly surprised.