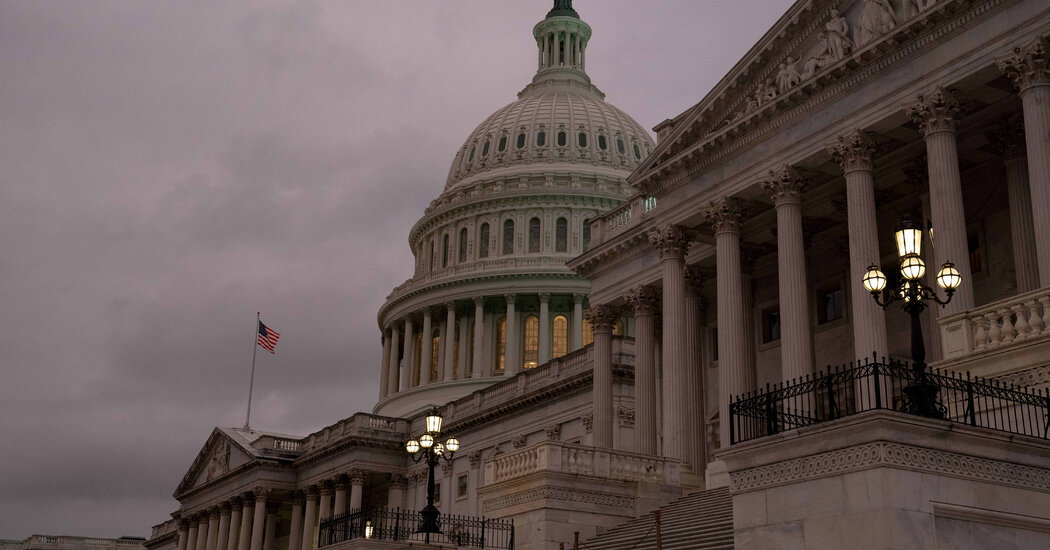 Lawmakers on Capitol Hill face a set of looming challenges this week: breaking a stalemate on coronavirus relief negotiations, pushing through legislation needed to keep the government funded past Friday and neutralizing the threat of a presidential veto to the annual bill that authorizes raises for American troops.

Without a relief package from Congress since the spring, small businesses, unemployed workers and state and local governments have found themselves reeling from the economic devastation of the pandemic. President-elect Joseph R. Biden Jr. has called on Congress to act on a coronavirus relief package and predicted that lawmakers would return to the negotiating table for an additional round of relief after he assumes office.

A bipartisan group of senators is pushing a $908 billion compromise that would include nearly $300 billion for small businesses, $180 billion for unemployed workers and $160 billion for state, local and tribal governments. Lawmakers and staff members are still working on legislative text, and have yet to finalize details of a number of critical provisions — particularly a Republican demand for a sweeping liability shield.

The proposal, spearheaded by Senators Joe Manchin III, Democrat of West Virginia, and Susan Collins, Republican of Maine, has yet to receive approval from Senator Mitch McConnell, Republican of Kentucky and the majority leader.

Congressional leaders suggested a deal that could be merged with an enormous year-end spending package also under discussion, which must pass to keep the government funded beyond Friday. Given the number of outstanding differences and the renewed flurry of negotiations around a coronavirus deal, it is possible that Congress will approve a one-week stopgap bill to secure additional time to reach an agreement on both an omnibus package and stimulus provisions.

“That would be our hope because that is the vehicle leaving the station,” Speaker Nancy Pelosi said at a news conference in the Capitol last week.

Like Ms. Pelosi, Mr. McConnell has expressed a desire to reach a bipartisan agreement on a coronavirus package before the end of the year.

Discussing the relief package, Senator Richard J. Durbin of Illinois, the Senate’s No. 2 Democrat, said on ABC’s “This Week” that there were “a few remaining issues,” but he thought they could be worked out.

“We have a lot of work to do and just a few days to do it,” he said on Sunday.

Lawmakers face another hurdle — the threat of a presidential veto — to passing the latest National Defense Authorization Act. Leading Republicans and Democrats alike said they would press ahead on the legislation, despite President Trump’s demand that lawmakers add an unrelated repeal of a legal shield for social media companies. Mr. Trump threatened to veto the legislation over the provision, but in a rare move, Republicans have balked at his request.

Arguing that “a license to practice law is not a license to lie,” nearly 1,500 lawyers issued a letter on Monday calling on bar associations across the country to investigate and, if needed, penalize the members of President Trump’s legal team, including the architect of his post-election strategy, Rudolph W. Giuliani.

“It is indefensible for lawyers to falsely proclaim widespread voting fraud, submit a pattern of frivolous court claims and actively seek to undermine citizens’ faith in our election’s integrity,” said the letter, which was signed by several former judges, former federal prosecutors and law professors. “We condemn this conduct without reservation.”

The letter comes as Mr. Trump and his Republican allies have lost or withdrawn from nearly 50 legal challenges to this year’s election, including five in five different states within about three hours on Friday evening alone. Even so, Mr. Trump’s lawyers and those representing his Republican allies have continued filing lawsuits, igniting criticism that they are acting frivolously, even irresponsibly.

In their letter on Monday, the signers noted that Mr. Giuliani — who recently tested positive for Covid-19, according to President Trump — has made baseless arguments in public about “massive fraud” in the election, but has tempered his claims under questioning in court, saying he was not alleging fraud.

“Mr. Giuliani’s aim is obvious,” the letter said. “To fuel Mr. Trump’s campaign to delegitimize the outcome of the election.”

Among the signers were Philip Lacovera, a former deputy solictor general who worked on the case that led to the resignation of President Richard Nixon; Stephen Gillers, a professor of legal ethics at New York University; and Thomas Vanaskie, a former judge with the Third Circuit Court of Appeals in Philadelphia.

The letter also took aim at another lawyer for Mr. Trump, Joseph DiGenova, who late last month publicly threatened Christopher Krebs, the former director of the Cybersecurity and Infrastructure Security Agency who was fired by Mr. Trump after he declared that the 2020 elections were “the most secure in American history.”

During an interview on the conservative TV outlet Newsmax, Mr. DiGenova said that because of Mr. Krebs’s remarks he should be “taken out at dawn and shot.”

For the moment, only a handful of challenges to the election are still moving through the courts, including an emergency petition by Mike Kelly, a Republican congressman from Pennsylvania, requesting the Supreme Court hear his appeal of a lawsuit seeking to invalidate the state’s election results.

There are also state cases still alive in Georgia and Arizona and a federal case filed by the Trump campaign in Wisconsin. Sidney Powell, a former lawyer for Mr. Trump whom the campaign has disavowed, has filed four more federal cases of her own — in Georgia, Wisconsin, Michigan and Arizona.

All of these efforts are running out of time to succeed. On Tuesday, the nation will reach the so-called safe harbor deadline, the date by which all state-level election challenges are supposed to be completed.

Then on Dec. 14, the Electoral College will cast its votes, making any attempt to overturn the results of the election nearly impossible.

President-elect Joseph R. Biden Jr. has selected Xavier Becerra, a former congressman who is now the Democratic attorney general of California, as his nominee for secretary of health and human services, ending a politically delicate search that brought complaints from the Congressional Hispanic Caucus about a lack of Latinos in the incoming cabinet.

Mr. Becerra became Mr. Biden’s clear choice only over the past few days, according to people familiar with the transition’s deliberations, and was a surprise. He has carved out a profile more on the issues of criminal justice, immigration and tax policy, and he was long thought to be a candidate for attorney general.

But as attorney general in California, he led legal efforts on health care, including leading 20 states and the District of Columbia in a campaign to protect the Affordable Care Act from being dismantled by Republican attorneys general. He has also been a leading voice in the Democratic Party for women’s health.

If confirmed, he will immediately face a daunting task in leading the department at a critical moment during a pandemic that has killed more than 281,000 people in the United States — and one that has taken a particularly devastating toll on people of color.

Mr. Becerra, 62, served 12 terms in Congress, representing Los Angeles, before becoming the attorney general of his home state in 2017. He is the first Latino to hold that office, and while in Congress he was the first Latino to serve as a member of the Ways and Means Committee. He also led the House Democratic Caucus, which gave him a powerful leadership post.

Dr. Rochelle Walensky, the chief of infectious diseases at Massachusetts General Hospital, will be tapped to lead the Centers for Disease Control and Prevention, according to a person familiar with Mr. Biden’s deliberations. Ms. Walensky, whose selection was reported earlier by Politico, will replace Dr. Robert R. Redfield as the leader of the scientific agency at the forefront of the nation’s pandemic response.

Officials in Georgia pushed back on Sunday against President Trump as he continued repeating baseless allegations questioning the integrity of the election and called for a special session of the State Legislature with the aim of overturning his loss.

Republican state officials defended the election results, noting that the outcome had withstood multiple recounts, and argued that the president was sowing division within the party and suspicion over the electoral process.

“The mountains of misinformation are not helping the process; they are only hurting it,” Georgia’s Republican lieutenant governor, Geoff Duncan, said on CNN’s “State of the Union” on Sunday, adding: “I voted for President Trump. I campaigned for him. And, unfortunately, he did not win the state of Georgia.”

The dispute over the election has inflamed a rift among Republicans as the president has castigated state officials in his own party. Republican officials have warned that the discord could have damaging consequences as the state’s incumbent Republican senators have been forced into runoff races against Democrats that will ultimately determine whether the party maintains its control of the Senate.

Mr. Trump traveled to Georgia for a rally on Saturday to mobilize his supporters to back Senators David Perdue and Kelly Loeffler in the January runoff. But the president mostly used the stage to air his grievances over the election and lash out at Gov. Brian Kemp and Brad Raffensperger, Georgia’s secretary of state.

Mr. Trump lost the state by just under 12,000 votes to President-elect Joseph R. Biden Jr., who won the White House with 306 electoral votes and was the first Democratic presidential candidate to win Georgia since 1992.

Still, Mr. Trump has kept contending that the outcome was not final. On Saturday, he pushed for Mr. Kemp to call for a special session of the Legislature, during which lawmakers could appoint electors who would override the popular vote and hand Mr. Trump a victory for the state.

Mr. Raffensperger said on ABC’s “This Week” that holding a special session would amount to “nullifying the will of the people.”

WILMINGTON, Del. — The hometown of President-elect Joseph R. Biden Jr. has long wrestled with its image problem. Namely, it does not have one.

If people could find Wilmington on a map — and many couldn’t — they thought of it as a convenient pit stop along the Northeast Corridor, which was dominated by far larger, more important, more colorful places. It is a city lacking a well-known culinary dish, historical event, professional sports team or even a particular turn of phrase.

And yet, against dubious odds not unlike those that Mr. Biden overcame in reaching the presidency after three tries, Wilmington appears determined to ride the Biden wave to long-elusive glory.

“Usually, nobody pays attention to us, and now we are on the news every night!” exclaimed Karen Kegelman of the Delaware Historical Society, whose first memorable encounter with Mr. Biden dates back to when he spoke at her high school graduation. She is 53.

The president-elect has transformed the city into a federal-government-in-waiting. He delivers speeches and television interviews from the Queen, a restored theater downtown. His motorcade, 20 vehicles long, regularly brings traffic to a halt, and gawking drivers appear delighted. Cabinet nominees swan through the opulent lobby of the Hotel Du Pont. Suddenly, all of Wilmington is bathing in the dizzying warmth of an unexpected spotlight.

“It creates great curiosity about the city,” Mayor Michael S. Purzycki said, “people coming by all the time wanting to know what is going on, tell me about your city.”

Mr. Purzycki harbors no illusions regarding the colorless reputation of his town: “Wilmington has always been on I-95 between Washington, Philly and New York, you know.” He compared its famously dull, corporate vibe to the unvarying “Mad Men” uniform worn by the legions of lawyers and chemical engineers who once populated its downtown: “a white shirt, a sincere tie and 12-pound wingtips.”