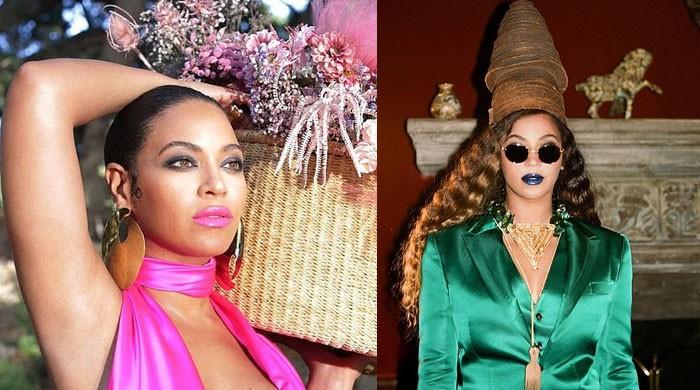 Beyonce has delighted her fans by sharing more of her stunning looks from her new multimedia masterpiece ‘Black is King’.

Taking to Instagram, the megastar has posted three new photos from the visual album to stun her  more than 150 million followers.

The film, which is being lauded by the industry, had a disappointing debut weekend on Disney+, according to Yahoo! Finance.

In the new pictures, which were shared in three separate  posts, Queen Bey is seen glowing in vibrant solid jewel tones.

She wore some round sunglasses and a bold metallic teal lip. Her long hair was down in soft curls and she wore a tall golden hat.

The Grammy winner styled the dress with a diamond necklace and earrings, and an enormous black hat that obscured her face.

Her second image has an edgier vibe and embraced a rich emerald color scheme and in it Beyonce is seen wearing a green top, accessorising it with a long golden hair-pick necklace .

The final photo shared by the A-lister was an ethereal outdoor snap of Beyonce wearing a hot pink silk halter top. She had her hair slicked back in the glowing snap and sported large gold statement earrings.

On her shoulder she carried a wicker basket of pale pink, purple and cream flowers.

Beyonce has sported more than 60 designer outfits in the visual album, which serves as a companion to her movie soundtrack, ‘The Lion King: The Gift’.

The 38-year-old singer wore incredible ensembles throughout the 85-minute film, which dropped on Disney+ last Friday.