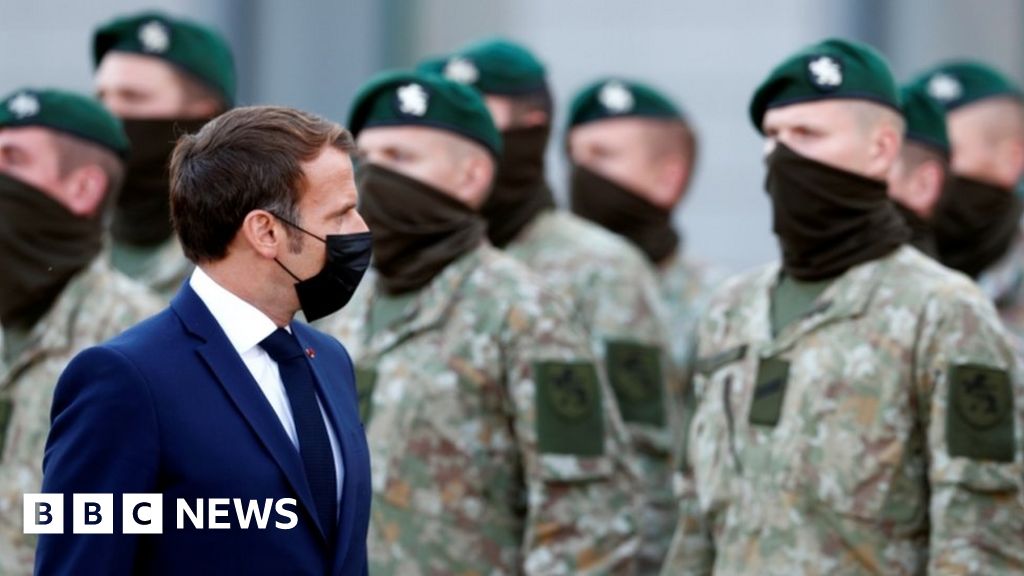 French President Emmanuel Macron has promised to help mediate in Belarus, following weeks of protests over a disputed presidential vote.

He called for a “peaceful transition” in the country after he met the exiled opposition leader Svetlana Tikhanovskaya in Lithuania on Tuesday.

It comes after the European Union said it did not recognise Alexander Lukashenko as the Belarusian president.

Russia remains Mr Lukashenko’s main ally, and it has promised to provide security assistance if the political crisis worsens.

But many countries have criticised a crackdown on mass demonstrations as well as the 9 August presidential election that the opposition says was rigged in Mr Lukashenko’s favour.

And on Tuesday, the UK and Canada announced sanctions on Mr Lukashenko and other senior Belarusian officials over a series of alleged human rights violations.

The EU has also threatened to impose sanctions.

What did the French president say?

“We will do our best as Europeans to help mediate,” Mr Macron told reporters. “Our objective is for this mediation to begin in the next few days or weeks.”

He spoke during a meeting with Ms Tikhanovskaya in Vilnius that was seen as a major show of support for the opposition figurehead.

“The aim is a peaceful transition, the release of people who are in prison for their political opinions and the holding of free elections under international observation,” Mr Macron added.

Ms Tikhanovskaya is due to visit Berlin next week and may meet Chancellor Merkel for talks, her spokeswoman told the Reuters news agency.

“[Mr Macron] supports the idea of mediation because he understands that powerful countries need to be involved to begin negotiations with Lukashenko,” Ms Tikhanovskaya said.

“I think he will speak with the Russian side about Belarus and will do everything possible to involve Russia in these negotiations,” she added.

But Russia responded to Mr Macron’s latest comments by denouncing what it called “unprecedented external pressure” on Belarus.

In televised comments, President Putin said Belarus was in a “difficult situation” and emphasised Moscow’s “timeless and all-weather” ties with the country.

And, later on Tuesday, a Kremlin spokesman downplayed the talks in Lithuania by describing it as a meeting between the “French president and a Belarusian citizen”.

Svetlana Tikhanovskaya said she looked to President Macron because “he is one of the most powerful leaders in Europe” and because “he and France are famous for having played the role of mediators in many other cases”.

It was a flattering reference to the French leader’s foreign policy activism, which currently appears to have gone up a notch or two.

In addition to his Belarusian intervention, Mr Macron has also been banging government heads in Lebanon while at the same time talking tough on behalf of Greece against Turkey. A few months ago he was sponsoring peace talks for Ukraine.

Historically, this is what France does. Not to get involved in the big issues on the European periphery would be to admit that France is no longer the country it once was. Whereas, with the UK leaving the EU, French foreign policy leadership is – in French eyes – more pertinent than ever.

But on top of that, there is the Macron factor. The president is still the man who came to power so unexpectedly three years ago; a man of immense self-belief who does not like to be told any mission is beyond him.

What else is happening?

The UK and Canada’s sanctions on Belarus, which include travel bans and asset freezes on senior officials, were jointly announced on Tuesday.

“Today the UK and Canada have sent a clear message by imposing sanctions against Alexander Lukashenko’s violent and fraudulent regime,” UK Foreign Secretary Dominic Raab said in a statement.

He added: “We don’t accept the results of this rigged election. We will hold those responsible for the thuggery deployed against the Belarusian people to account and we will stand up for our values of democracy and human rights.”

“[We] will not stand by silently as Belarus continues to commit systematic human rights violations,” Canada’s Minister of Foreign Affairs Francois-Philippe Champagne said.

“Canada stands in solidarity with the people of Belarus as they struggle to restore human rights and achieve democracy,” he added.

Meanwhile, Belarus’ ministry of information announced it would suspend the independent online media outlet Tut.by from 1 October until 30 December.

The website is one of the most popular news sources in the country, and it has been a major source of updates during the recent unrest for both Belarusians and foreign media.

Belarus has been heavily criticised by rights bodies in the past for suppressing free speech and muzzling the press.

Mr Lukashenko, 66, claimed a sixth term as president in the widely disputed election of 9 August. He insisted that he had won fairly with 80% of the vote and depicted the protests against him as a Western-backed plot. Earlier this month, he secured a $1.5bn (£1.2bn) loan from Russia.

Ms Tikhanovskaya claims to have won 60-70% in places where votes were properly counted.

But Mr Lukashenko was sworn in for a sixth term at a secret ceremony last week, prompting mass street protests in the capital Minsk and elsewhere. The US and the 27 member states of the EU responded by saying they did not recognise Mr Lukashenko as the legitimate president.

Many opposition figures are now in self-imposed exile in neighbouring countries amid a wave of arrests and detentions.

Despite the crackdown, anti-government protests show no signs of diminishing.