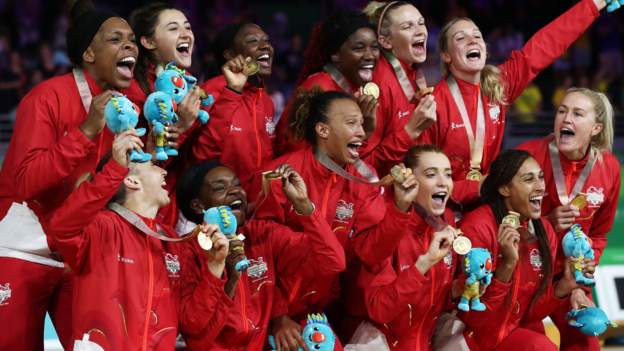 The BBC will broadcast the 2022 Commonwealth Games and the decision to have more women’s than men’s medal events was described as “phenomenal”.

The Birmingham Games will take place from 28 July to 8 August and will be the first major multi-sports event to award more medals to female athletes.

England netballer Eboni Usoro-Brown says “it is testament to how far women’s sport has come”.

“It’s positive for sport in general to be shown free-to-air, but especially for women’s sport, which is trying to get more funding and exposure.

“The BBC have led from the front and the fact they have the rights to the Games, with more medals being awarded to female athletes, highlights the successes of women’s sport.”

Usoro-Brown was part of the England squad that won gold in 2018 and says the Roses can defend their title “without a doubt”.

“Netball has got more competitive on the international stage,” added the 32-year-old.

“Whereas before, Australia and New Zealand were the two nations that usually played for the gold medal – now, any team can win.

“After Gold Coast and the 2019 Netball World Cup in Liverpool, there has been so much interest in the sport itself, especially with new young talent coming through.

“It’s about keeping that level of consistency leading into Birmingham, and what better way to do defend our title than on home soil.”

The £800m Games is set to be the most expensive sports event staged in Britain since the London 2012 Olympics.

Two months ago, escalating costs and construction delays caused by the coronavirus pandemic were blamed for the abandonment of the £500m athletes’ village.

And earlier this month, Jonathan Browning became the second board member to resign from the organising committee, because of “growing frustration” at “a lack of transparency”.

But Usoro-Brown says the Games are “something we can all look forward to”.

“It has been a challenging year for everyone but, off the back of London 2012, we know we can do it well,” she said.

“I really hope, Covid-19 permitting, fans can attend the games because they are our 13th player.

“When the pressure is on, to hear them roar can really help you get over the line, and it fills us with such pride to know we are representing our county.”

BBC to broadcast the Games

The event will be the 18th consecutive Games to be broadcast by the BBC.

Taking place across Birmingham and the West Midlands, the BBC will deliver extensive coverage of the Games across all platforms, providing audiences across the UK with a 24/7 service of live action, highlights, news and more.

Tim Davie, director-general of the BBC, said: “In a year when many major sport events have been postponed, this is welcome news for sports fans. We are delighted to be broadcasting the Commonwealth Games.

Commonwealth Games Federation president Dame Louise Martin said: “We anticipate some of the world’s highest profile athletes will compete at Birmingham, which will be an historic event for women’s sport, with more medals for women than men.

“I am thrilled that the BBC will once again connect millions of viewers to the drama and excitement of the Commonwealth Games, bringing their world class production and analysis to homes and handsets across the UK.

“The BBC has demonstrated a huge commitment to women’s sport and with 2022 marking their centenary, I am delighted they are again partnering with Commonwealth Sport to help us generate huge levels of excitement and anticipation in the lead up to one of the biggest sporting events the UK has ever have hosted.”