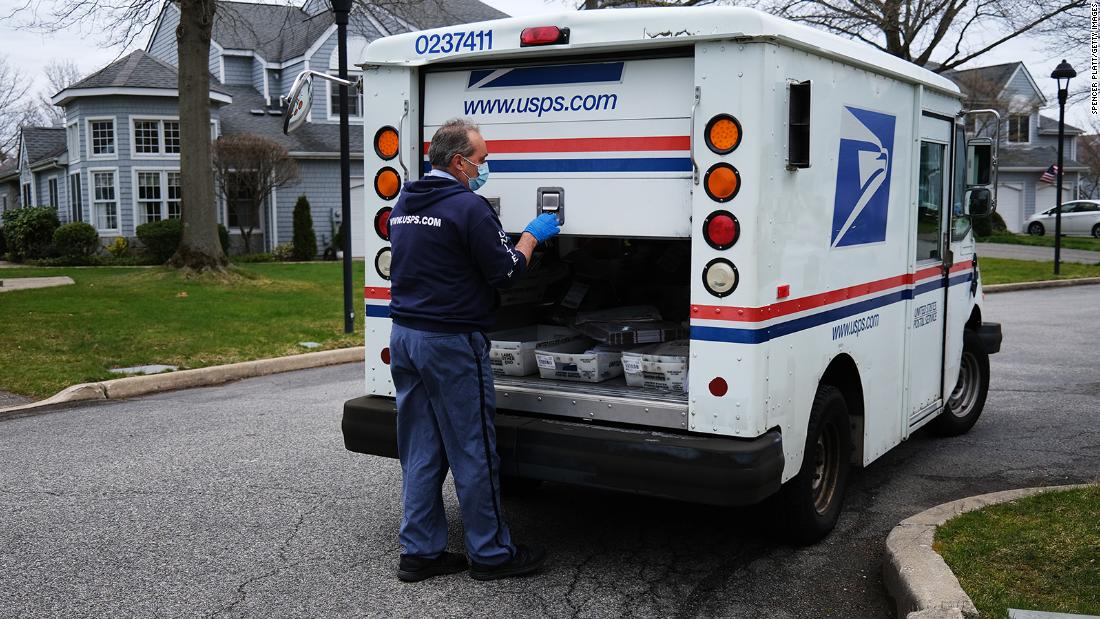 And in another sign of Mnuchin’s involvement in the Postal Service’s dealings, the Treasury secretary received briefings from the USPS Board of Governors to discuss the appointment of DeJoy as postmaster general earlier this year, a source familiar with the matter told CNN, an irregular arrangement that has not happened in past appointments.

In heated discussions with DeJoy on Wednesday, Democrats demanded that the Postal Service repeal cutbacks that have slowed the mail already, months before the November elections. Schumer told CNN on Thursday that Democrats called on DeJoy “to pull back on these cutbacks on overtime and employees, so all the mail can be delivered on time on Election Day.”

In another sign of the strife, two members of the Postal Service’s Board of Governors have resigned in recent months before DeJoy took over, for reasons including efforts from the Trump administration to exert control over the Postal Service’s finances and operations, according to a source and a Democratic lawmaker who spoke to one of the former board members. All members of the Board of Governors are now Trump appointees.

The moves that have unfolded just six weeks into DeJoy’s tenure have cast new doubts about the ability of the Postal Service to handle what is shaping up to be a major increase in mail-in voting in November as the country grapples with the Covid-19 pandemic. Democrats charge that the service cuts smack of political influence when they come at the same time that Trump is falsely claiming mail-in voting will result in massive fraud.

“That’s the concern, he’s sending a message … You can’t trust the mail,” said Rep. Mike Quigley, an Illinois Democrat who chairs the House Appropriations subcommittee that oversees the USPS. “Someone from the outside would say the guy is tanking it because the President doesn’t like mail, doesn’t want to encourage mail, and using the postmaster general is one way to do that.”

As postmaster general, DeJoy has focused on the need to get the Post Office’s red ink under control, saying in a statement last week that there were plans “to improve operational efficiency and to further control overtime expenditures.” But in letters to Congress, the Postal Service distanced itself from the cuts to service and overtime, saying that a memo detailing them did not come from Postal Service headquarters.

And on Monday, the USPS said in a statement it had “ample capacity” to handle mail-in voting in November.

Democrats have pushed to give $25 billion to the Postal Service over three years to keep its operations afloat and protect mail-in voting, but the White House has resisted those efforts. Democrats have floated $10 billion over one year during negotiations with Mnuchin and White House chief of staff Mark Meadows — negotiations that included DeJoy on Wednesday, a sign of the importance of the issue to the larger stimulus talks.

Trump had repeatedly attacked both the Postal Service and vote-by-mail, falsely claiming that elections conducted by mail are ripe with fraud. He said on Fox News Monday morning that the “Post Office will never be equipped to handle it,” after his campaign filed suit to stop Nevada from mailing ballots to all voters.

Trump has also long accused the Postal Service of losing money over the price it charges to deliver packages — and has singled out Amazon and its founder Jeff Bezos, who owns the Washington Post, another frequent target of Trump’s ire.

The Treasury Department declined to comment on Mnuchin’s involvement with the Postal Service or the briefings he received. A Postal Service statement on the Treasury loan said that providing the contract information was an acknowledgment that “Treasury has been designated by Congress as the lender for the Postal Service, and it therefore has a legitimate interest under certain circumstances in understanding those factors that affect our current and projected financial position.”

DeJoy, the former CEO of New Breed logistics, which was a USPS contractor, began his new role in mid-June. His selection follows the departure of two members of the Board of Governors: Deputy Postmaster General Ronald Stroman resigned on June 1, and David Williams had left the board a month earlier.

Both former board members have raised concerns about Treasury’s involvement in the USPS.

One source familiar with the matter said Stroman resigned his position in June due to efforts by the Trump administration to exert control over the USPS, which he believed threatened the independence of the service.

Rep. Gerry Connolly, the chairman of the House Oversight Government Operations Subcommittee, said Williams spoke to several members of Congress since his resignation about the concerns he had with the Treasury Department’s influence over the Postal Service. The Virginia Democrat said he told Williams, a former USPS inspector general and also an Obama appointee, he was interested in having him testify before Congress about what he witnessed.

According to a summary released by congressional Democrats, the $10 billion loan includes a requirement that the USPS provide copies of its 10 biggest “negotiated service agreements” to the Treasury Department. That condition on the proprietary information would include the Postal Service’s major contracts with companies like Amazon — a company Trump has insisted should be paying more to the Postal Service to deliver its packages.

House Oversight Chair Carolyn Maloney and other Democrats charged the loan terms would “inappropriately insert the Treasury into the internal operations of the Postal Service using onerous loan conditions.”

Trump said in April that he wouldn’t sign off on any additional funding for the Postal Service unless it raised its shipping prices.

‘The efficiency of our operations’

DeJoy is a major Republican donor and held a fundraiser for Trump at his North Carolina home in 2017. His wife, Aldona Wos, has been nominated to be the next US ambassador to Canada.

Filings from Wos earlier this year showed potential financial conflicts of interest, including holdings in USPS competitor UPS. The disclosure also showed tens of millions of dollars in holdings of shipping logistics company XPO, which acquired DeJoy’s former company, New Breed, in 2014. The postmaster general is not required to divest of any particular assets, according to requirements. Instead “the Postmaster General may be required to divest an asset if a conflict of interest arises, and the Postal Service determines that his participation in the matter is so crucial that he may not disqualify himself,” according to Title I of the Ethics in Government Act of 1978. A spokesperson for the USPS says DeJoy has followed all requirements.

Since taking over in June, DeJoy has targeted the Postal Service’s finances — the Postal Service has warned it could run short of money before the end of the year — and in the process has angered lawmakers and some industry stakeholders. His selection has sparked concerns that he might attempt to privatize the Postal Service, a longtime conservative goal.

Last month, a Postal Service memo stating late and extra delivery trips and overtime were no longer authorized sparked alarm across the postal industry. The memo, which explained the changes could save upwards of $200 million, noted that it may be difficult for employees “to see mail left behind or mail on the workroom floor or docks … which is not typical.”

In letters to lawmakers, the USPS general counsel said the memo did not originate from Postal Service headquarters and should “not be treated as official statements of Postal Service policy.” Still, the July letters confirmed the USPS was taking “immediate steps to increase operational efficiency by re-emphasizing existing operational plans.”

And a statement released by DeJoy after news reports about the memo focused on the long-term need for “vigorously focusing on the efficiency of our operations.”

The president of the American Post Workers Union, Mark Dimondstein, told CNN last week the union received a number of reports that mail delivery service had been “degraded,” raising concerns that it would impact ballots in November.

A source who’s spent 32 years in the mailing industry and works closely with the US Postal service said the changes were made without the industry’s collaboration, calling the lack of communication “troubling.”

Instead of an official announcement, major customers only found out about the changes thanks to leaks from Postal Service employees. These customers, who rely on the USPS for timely delivery of their products, were caught off guard and have experienced days-long delays.

“There are many formal and informal forms and processes by which the Postal Service can and often does share information about its plan with its customers or people who represent their customers, that really didn’t happen here,” the source said.

And a mailing industry source who works closely with the Postal Service took issue with congressional response, calling it “absolutely dismissive” to blame it on “some lower-level official out in the field.”

‘We’re trying to get more answers’

Democrats argue additional funding they’re seeking in the next round of stimulus negotiations would help stave off service cuts ahead of the election, but they haven’t been able to try to get DeJoy on board until his Wednesday meeting with Schumer and Pelosi — because lawmakers say he isn’t returning their calls.

Sen. Tom Carper, a Delaware Democrat, told CNN that he spoke to DeJoy when he was first selected to congratulate him. Since then, DeJoy hasn’t responded to his outreach.

“I’m really concerned when the postmaster general of this country can’t find time to return my calls, the calls of a lot of other senators and House members that know a few things about this, care about this issue. And he can’t find the time,” Carper said.

“We’re trying to get more answers,” said Sen. Gary Peters, the top Democrat on the Senate Homeland Security Committee, who led the Senate letter. On Thursday, Peters announced he was launching an investigation into the USPS service delays.

Connolly said he also has yet to hear DeJoy directly, though the House Oversight Committee has invited him to testify next month. Conolly said he didn’t know what actions DeJoy has taken directly, but said he’s heard “widespread reports” anecdotally about cuts to the service — and he’s concerned it’s a prelude to problems surrounding mail-in voting in November.

“That’s our worry, that the new postmaster general is deliberately sabotaging postal delivery so that they can say, ‘Gee, we’re sorry the ballots didn’t get there in time, or we’re going to have to slow down the delivery of this massive infusion of ballots because of not paying overtime, because we have strict rules on volume being delivered and vehicles to deliver them,'” Connolly said.