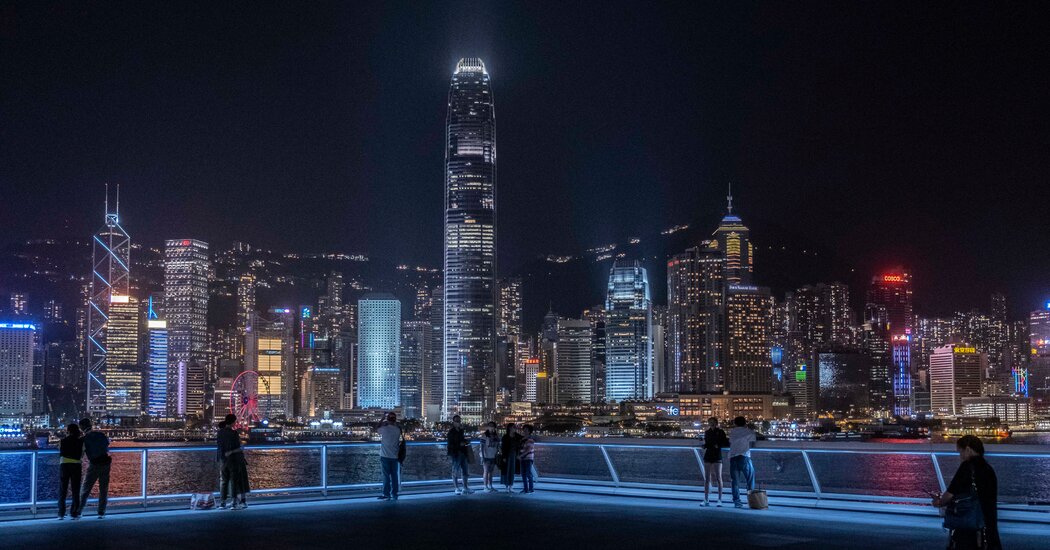 HONG KONG — In Western democracies, they have been welcomed as refugees escaping Beijing’s tightening grip over Hong Kong.

In China, they have been denounced as violent criminals escaping punishment for their seditious activities.

A group of Hong Kong activists who have been granted asylum in the United States, Canada and Germany in recent weeks are the latest catalyst for deteriorating relations between China and the West. Western leaders have asserted that they will stand up for human rights in Hong Kong, while Chinese officials have rebuked the countries for what they called interference in Beijing’s affairs.

The protesters’ newly conferred status has made clear how profoundly Hong Kong has changed since China imposed a tough new security law this summer. For decades, the city had been a place of shelter for people escaping war, famine and political oppression in mainland China. Now the semiautonomous city has become a source of asylum seekers.

“The United States is a country that allows us freedom,” said Vicky Xiao, a 20-year-old university student from Hong Kong who is in California and seeking asylum in America.

The United States is directly challenging Beijing over its crackdown on Hong Kong. The Trump administration moved to list refugees from the city as a priority for the first time — even as it reduced the total number of refugees the United States will take in annually. At least three bills now before Congress would enact greater protections for people fleeing Hong Kong for the United States. And the government has moved unusually quickly to grant asylum to at least two protesters who left Hong Kong late last year.

The two activists, who asked not to be named to protect their families in Hong Kong, showed The New York Times documents stating they had received asylum in September. They said they had fled to the Los Angeles area after receiving multiple calls from an unlisted number that made them concerned they were at risk of being detained.

Ms. Xiao, the university student who is awaiting a decision on her asylum application, is also in Southern California. She is currently on a student visa and lives with her parents, who are on business visas.

She described sneaking out of her parents’ house with a backpack of clothes last August and flying to Hong Kong to join the protests without their approval. She said she returned after three days, but has also helped organize protests in the United States, which she thinks could put her at risk of arrest if she had to return to Hong Kong after her visa expires.

“I don’t know what will happen to me if I go back to Hong Kong,” Ms. Xiao said. “But I don’t think that the consequences will be good.”

China has not commented on the U.S. asylum cases. But Beijing and the Hong Kong government have dismissed the notion that the city’s residents might need shelter from oppression, saying the authorities guarantee the rights of its people. “There are no so-called ‘refugees being persecuted’ in Hong Kong,” the city government said in a statement.

And officials have lashed out publicly at other countries. Hong Kong’s No. 2 leader, Matthew Cheung, summoned Germany’s consul general on Wednesday to complain after Germany granted asylum to a university student who was wanted on a rioting charge. Mr. Cheung said the move would “only send a plainly wrong message to criminals.”

In Canada, China’s ambassador, Cong Peiwu, warned Ottawa against accepting refugees from Hong Kong. He said that such a policy would embolden criminals in the Chinese city and put “the good health and safety” of 300,000 Canadian passport holders and companies in the territory at risk.

The ambassador’s remarks were regarded by some as a potential threat against Canadians in Hong Kong. They were also a reminder of the two Canadians who have been held for nearly two years in China in retaliation for the arrest of a top executive of Huawei, the Chinese technology giant. Canada’s foreign affairs minister, François-Philippe Champagne, denounced the comments as “totally unacceptable and disturbing.” (The Chinese government later asserted that the remarks had been taken out of context.)

China’s crackdown over Hong Kong has prompted residents with means to consider their options elsewhere. Some have turned to Britain, Hong Kong’s former colonial master, which has expanded channels for the city’s residents to immigrate.

Prime Minister Boris Johnson said in June that the country would allow holders of British overseas passports in Hong Kong to live and work in Britain for up to five years and later apply for citizenship. The residency plan is open to nearly three million people in total.

China has criticized the plan. A foreign ministry spokesman, Zhao Lijian, said on Friday that Beijing is now considering not recognizing the British overseas passport as a valid travel document.

Interest in the passports has grown, with the number of overseas passport holders more than doubling to over 357,000 in April from about 170,000 in 2018. Such passports, which were given to Hong Kong residents before the territory was returned to China in 1997, bear the insignia of the British government but do not confer the rights of citizenship.

Derek Yeung, 60, who worked in sales for technical products, moved to Britain in August to take advantage of the new policy. He said that he had often traveled to the mainland for work and had seen corruption and abuses of power. His experience convinced him that he would eventually need to leave Hong Kong after it returned to Chinese rule.

“Because of my experience in China, I predicted that Hong Kong will soon degenerate into a police state,” he said by phone from Cambridge. The security law imposed this summer “just confirmed my fears,” he said.

The group was started by Simon Cheng, who was granted political asylum in Britain in June, and other activists. Mr. Cheng says he gets 10 to 15 inquiries a day about asylum procedures in Britain alone.

Mr. Cheng, a former employee of the British Consulate in Hong Kong, had been detained for 15 days in mainland China last year and accused of soliciting prostitution, a charge he denies. He says that while he was in custody he was beaten and hung for hours in a spread-eagle position, and coerced into making a videotaped confession.

Mr. Cheng said that as an overseas passport holder, he was eligible to stay in Britain, but that gaining asylum would demonstrate the injustice of his experience.

“I wanted to fight for my reputation, to show my detention politically motivated, that it was intrinsically persecution,” he said.

A Covid-Free Cruise Takes Planning, but the Strip Show Goes On

Coronavirus Vaccine in New York: What to Know

Crowded Subways? Yes, in Neighborhoods Where People Have to Go to Work