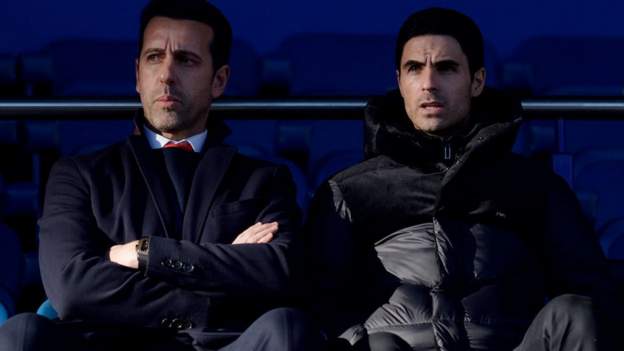 Arsenal manager Mikel Arteta is doing “a great job” and the club has a “big and beautiful future”, says the club’s technical director Edu.

The Gunners have made their worst start to a season for 46 years.

Before Sunday’s 1-0 loss to Burnley, they had not lost four successive top-flight league games since 1959.

Yet, even though the team were booed off by the 2,000 fans present, senior sources insist Arteta has unequivocal support throughout the club.

And, as Manchester City boss Pep Guardiola offered a ringing endorsement of his former assistant, Edu says he is certain Arteta is on the right path.

“It’s normal and easy to be driven by results. But I can see the future, see where we go and the way we are building things on a daily basis. Everything here is right, everything here is working

“How many young players have started to get opportunities and perform quite well in the first team?

“I can see a big and beautiful future. It’s very strange to say that in this moment, but I have to be fair – that’s the way I see the photo.”

Arsenal have taken one point from their last five league matches and four from their last eight, and have slipped to 15th in the table, five points above the relegation zone.

After replacing Unai Emery in November 2019, Arteta beat Manchester City and Chelsea on their way to winning the FA Cup for a record 14th time.

They have also beaten Liverpool in the Premier League, the EFL Cup and the Community Shield during Arteta’s time in charge, and defeated Manchester United at Old Trafford on 1 November.

However, they have not won a domestic game since then – and their matchwinner that day, captain Pierre-Emerick Aubameyang, had not found the net either until his own goal condemned Arsenal to another defeat on Sunday.

“He is one of the best managers I’ve ever worked with and seen directly,” Guardiola said of Arteta.

“I don’t have to publicly give my support because he knows he has it. Sometimes a club needs time when it comes from a period where it is not so good.

“I don’t have any doubts about his quality and capacity to put Arsenal in the place Arsenal deserves to be. There is no-one better to lead the club this year and in the next ones.”

Arsenal will look to make signings next month but Edu is adamant their squad is a good one and it is down to individual players to take responsibility for overall improvement.

He also defended high-profile summer arrival Willian, after the 32-year-old midfielder’s below-par performances led to calls for him to be dropped.

“It is just a question of time before Willian is performing how we know he can,” said Edu.

“Do you expect it straightaway? Boom. Willian can be the best one. But you need time to know the other players.

“When we signed David Luiz, he mentioned to me: ‘When I drive, most of the time for all my life, I turn right to go for one road. I’m experienced but I am facing a situation now where I turn left. It’s quite strange to come here and I need time to get used to it’.”

With games against Southampton – which will be played behind closed doors after London was placed in tier three of the UK’s coronavirus pandemic restrictions – and Everton before a Boxing Day encounter with Chelsea, there is an easy way out of Arsenal’s current predicament.

But Edu promises to be alongside Arteta every step of the way.

“We have faced so many changes, now is the time to try and be a stable club in the old sense – externally and internally – we need that,” he added.

Covid-19: ‘Unrealistic’ to expect NI lockdown to end on 5 March