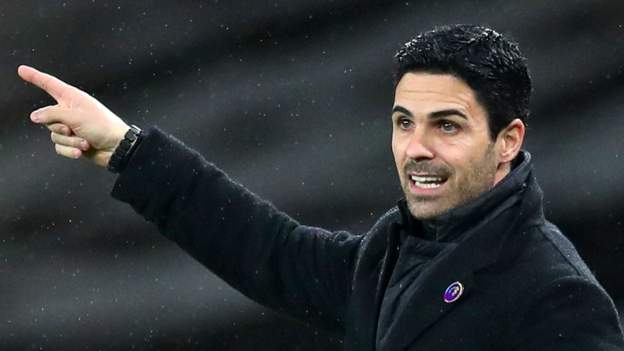 Arsenal manager Mikel Arteta says his team must accept criticism, be “brave” and put their “face and body on the line” to reverse their poor form.

The Gunners have lost four of their past five Premier League matches and slipped to 15th during their worst start to a season for 46 years.

Arteta, who has also been criticised, dismissed talk of a relegation battle, describing the run as “a blip”.

“At the moment, I’m sorry, but we have to take the bullets,” he said.

“Dropping and dropping down the table is not the situation we want to be in. But this is our reality right now and we have to face it.

“We have to face it being brave, fighting and no-one giving up or anything.

“It’s not time to hide – it’s time to put your face and body on the line.”

Arsenal’s technical director Edu has called for patience from supporters as the club rebuilds under Arteta, while Manchester City boss Pep Guardiola has also offered a ringing endorsement of his former assistant.

However, Arteta, who succeeded fellow Spaniard Unai Emery in December 2019, says he is happy to assume responsibility for their failings on the pitch.

“We are not winning football matches and I have to put my chest there and you have to hit me,” added the 38-year-old former Gunners captain in a news conference on Tuesday.

“You have the right to hit me because I’m not winning.

“So what else can I do? Put my head down, work harder and try to do things better and improve. That’s how we have to approach things, in my opinion.

“It’s natural. I accept the criticism and it’s part of the job.

“You can explain whatever you want but, at the end of the day, you have to win football matches and this club is too big to accept this many losses in the last weeks.