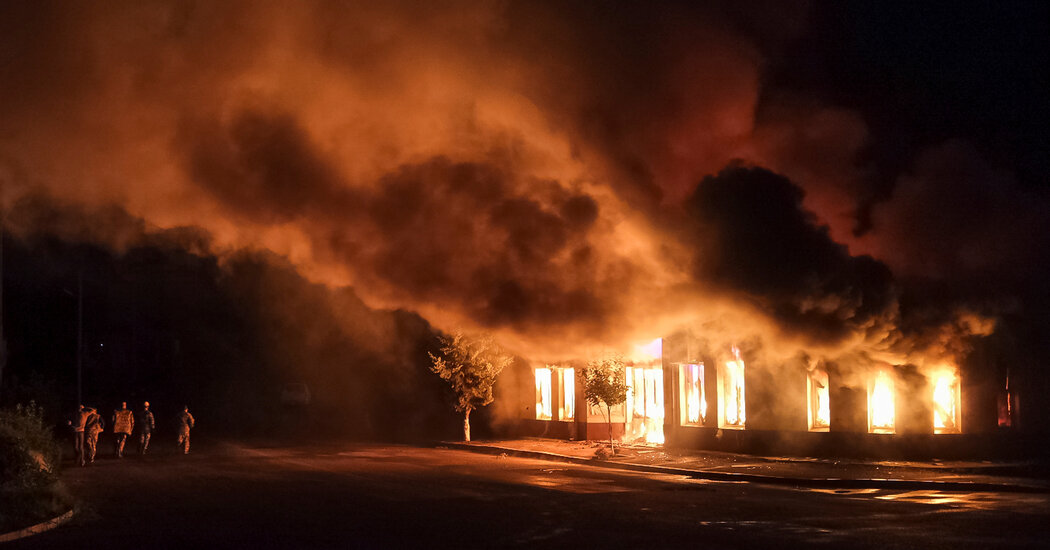 When Nikol Pashinyan, Armenia’s prime minister, spoke by telephone on Thursday with President Trump’s national security adviser, he raised a delicate issue: Why is nothing being done to stop a longtime United States ally, Turkey, from using American-made F-16 jets against ethnic Armenians in a disputed mountain region?

Mr. Pashinyan’s call to the national security adviser, Robert O’Brien, followed an eruption of heavy fighting in and around Nagorno-Karabakh, a remote territory at the center of the most enduring and venomous of the “frozen conflicts” left by the collapse of the Soviet Union in the late 1980s.

The breakaway enclave, legally part of Azerbaijan but controlled by Armenians for the past three decades, has seen many military flare-ups over the years. But the current fighting, Mr. Pashinyan said in a telephone interview, has taken on a far more dangerous dimension because of Turkey’s direct military intervention in support of Azerbaijan, its ethnic Turkic ally.

On Sunday, news reports said, the forces of Armenia and Azerbaijan, both former Soviet republics, exchanged rocket fire, with missiles falling on Azerbaijan’s second largest city, Ganja, and on the Armenian-controlled capital of Nagorno-Karabakh. Each side accused the other of targeting civilians while denying carrying out any attacks itself on residential areas.

The conflict has set off alarms about the risks of a wider war and put the United States, with its large and politically influential Armenian diaspora, in the uncomfortable position of watching Turkey, a vital NATO ally, deploying F-16 jets in support of Armenia’s enemies.

“The United States,” Mr. Pashinyan said, “needs to explain whether it gave those F-16s to bomb peaceful villages and peaceful populations.” He said that Mr. O’Brien had “heard and acknowledged” his concerns and promised to set up a phone conversation between the Armenian leader and President Trump.

That opportunity to rally the United States to Armenia’s side vanished just a few hours later when President Trump announced that he had tested positive for the coronavirus.

But Mr. Trump’s health issues, analysts say, have only accentuated his administration’s disengagement from a conflict that offers no easy diplomatic victories. It has confounded decades of efforts to resolve a dispute that has left Armenians in control of not only Nagorno-Karabakh but large swathes of Azerbaijani territory outside the breakaway enclave.

Mr. Pashinyan declined to say whether Armenia might be ready to surrender any occupied Azerbaijani land as part of a possible peace settlement, insisting that this not up to him but a matter for the leaders of Nagorno-Karabakh, a nominally independent entity ruled by ethnic Armenians.

Turkey said on Sunday that Azerbaijani forces had retaken Jabrail, the latest in a series of villages previously occupied by Armenia now said to be back under Azerbaijani control as a result of fighting over the past week. The claim could not be independently confirmed.

The Trump administration, distracted by other bigger issues like China, has “simply not been paying attention and been completely disengaged,” said Thomas de Waal, a British expert on the region and author of a book on Nagorno-Karabakh, “Black Garden: Armenia and Azerbaijan Through Peace and War.”

For Armenia, Mr. Pashinyan said, the current fighting, which began Sept. 27 after months of rising tensions, poses an “existential threat” because of the role of Turkey, whose precursor, the Ottoman Empire, killed an estimated 1.5 million Armenians at the end of World War I. The U.S. Congress and many countries have declared that slaughter a “genocide,” a label Turkey strenuously rejects.

Armenia, too, has selective memories of the past, with Mr. Pashinyan dismissing the worst atrocity of the 1991-1994 Karabakh war — the 1992 killing of hundreds of Azerbaijani civilians by Armenian fighters near the town of Khojaly — as a “pure propaganda trick.”

Armenia and Azerbaijan have a long record of playing down or ignoring each other’s past traumas, a tendency that has made it all but impossible for either side to accept legitimate grievances and has frustrated outside efforts to settle their feud over Nagorno- Karabakh.

“Each side focuses exclusively on their own traumas and belittles those of the other side,” Mr. De Waal said. “This conflict will go on for at least another generation unless it can be smothered by an international security operation” like the one that tamped down war in the Balkans in the 1990s. That, Mr. de Waal added, “is highly unlikely in the current international situation.”

Azerbaijan, Mr. Pashinyan said, has long harbored hopes of recovering Nagorno-Karabakh by force but was “encouraged” by Turkey to launch its recent offensive against the Armenian-controlled enclave.

“This is a continuation of the genocidal policies carried out by Turkey against the Armenians,” he said. He accused Turkey of not only providing air support but also recruiting Syrian fighters, whom he called “mercenaries and terrorists,” to strengthen Azerbaijan’s military forces on the ground.

Turkey has denied Armenia’s accusations, including unsubstantiated claims that a Turkish F-16 last week shot down an Armenian jet. It has instead blamed the spiraling violence on Armenia, with the foreign ministry in Ankara saying on Sunday that “Armenia is the biggest barrier to peace and stability in the region.”

Though obscured by a fog of propaganda by all sides, the conflict has clearly escalated beyond a local ethnic dispute into a bigger struggle as an increasingly assertive Turkey flexes its muscle in a region traditionally dominated by Russia.

Russia has a military base in Armenia and, with the United States standing back, Moscow has taken the lead in diplomatic efforts, so far fruitless, to calm the fighting while avoiding a direct confrontation with Turkey, with which it is already fighting proxy wars in Syria and Libya.

Describing the conflict over Nagorno-Karabakh between Christian Armenia and Muslim Azerbaijan as a “civilizational front line,” Mr. Pashinyan said the dispute “is not about territory” but involves far bigger and more important stakes.

“Armenians in the south Caucasus are the last remaining obstacle in the way of Turkish expansion toward the north, the south and the east,” he said.

Did John McCracken Make That Monolith in Utah?