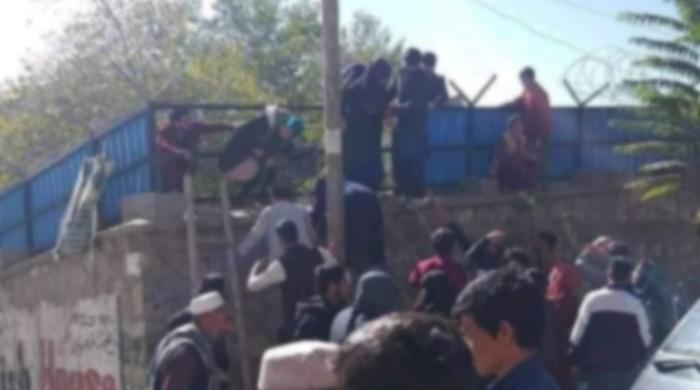 KABUL: At least three armed assailants reportedly attacked a university Monday afternoon in Afghanistan’s capital, with local and international media reporting that explosion and gunshots were heard at the institute.

Students of the Kabul University escaped a compound after at least three assailants stormed the varsity, Tolo News said in an update, citing sources, with the attack coming as several senior government officials were expected to attend the opening of an Iranian book fair.

Authorities have reached the attack scene.

“Gunshots are being heard from inside the university,” Hamid Obaidi, spokesperson for the ministry of higher education, told AFP.

Students were being evacuated from the building, he said.

The ministry of interior confirmed gunshots were heard at the university and that police had been deployed.

There were no immediate details of any casualties.

A member of Afghanistan’s Parliament, Mariam Sulaimankhel, shared a video from the scene, terming the incident “a disgusting terrorist attack” and asking why the attacks “want to discourage the younger generation from educating themselves?”

In recent years, several education centres have come under attack from extremist groups such as Daesh. Last week at least 24 people — mostly students — were killed in a suicide attack on an educational centre in western Kabul district that was claimed by the terrorist group.

In 2018, a suicide bomber had killed dozens of people, many of them teenagers, in front of Kabul university in an attack also claimed by Daesh.