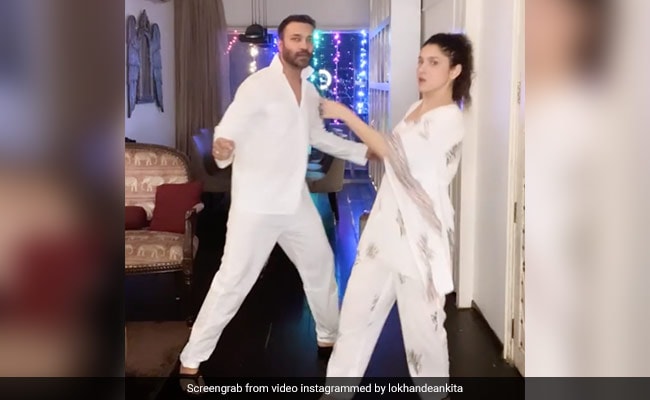 TV actress Ankita Lokhande and her boyfriend  Vicky Jain found the perfect way to have fun at home. They danced like nobody is watching. Ankita posted a fun-filled video on her Instagram profile on Monday. In the video, she and Vicky Jain, twinning in white outfits, can be seen dancing to the titular track from Hrithik Roshan and Katrina Kaif’s 2014 film Bang Bang. Ankita captioned the post: “Vikki and Anky.” She added the hashtags #reelsinstagram, #reels, #vikkianky, #dance and #nightdresses to her post. Needless to say, the actress’ Instafam loved her post.

Ankita Lokhande and her boyfriend appear on each other’s social media profiles every now and then. The couple celebrated Diwali together, glimpses from which the Pavitra Rishta actress shared on her Instagram profile. Check it out:

Ankita Lokhande, a popular name in the Hindi TV industry, is best-known for playing the role of Archana in the popular television show Pavitra Rishta, in which she co-starred with late actor Sushant Singh Rajput. They dated for six years and they parted ways in 2016. Besides Pavitra Rishta, Ankita has featured in shows such as Ek Thhi Naayka and Shakti – Astitva Ke Ehsaas Ki.

Last year, Ankita Lokhande made her Bollywood debut with Kangana Ranaut’s period-drama Manikarnika: The Queen Of Jhansi. She also starred in Baaghi 3, which featured Tiger Shroff in the titular role. Ankita Lokhande was also a participant in TV reality shows like Jhalak Dikhhla Jaa and Comedy Circus.