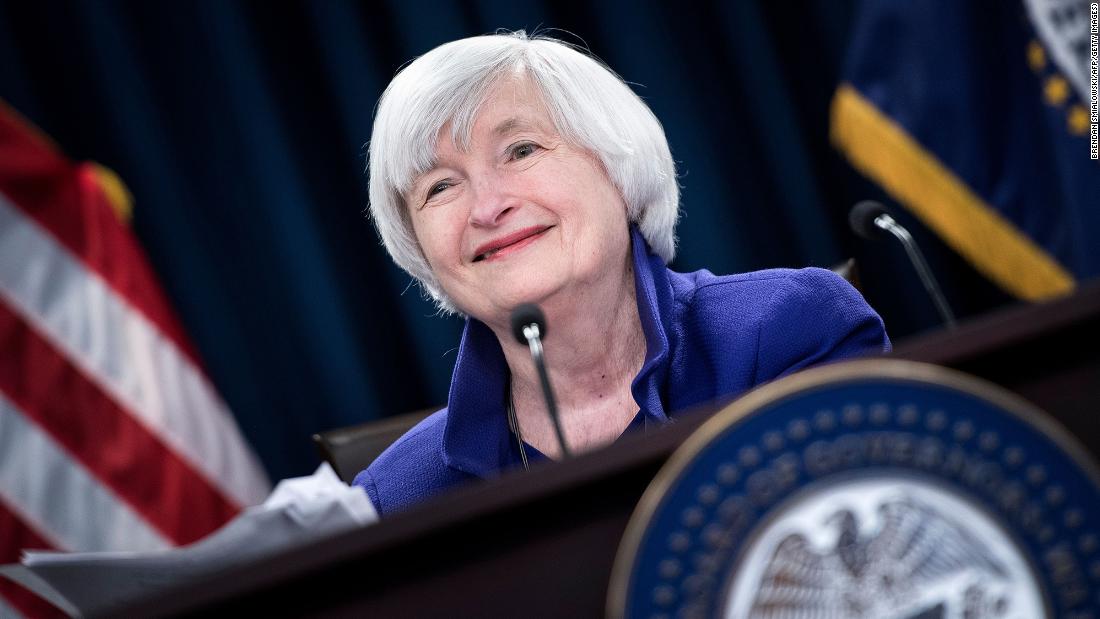 The significance of Biden’s Treasury pick is amplified by the enormous crisis and fragile economy he will inherit in January as the recovery weakens. The Treasury chief will be charged with leading America’s economy out of the pandemic as well as narrowing the staggering gap between rich and poor.

Yellen is no stranger to the limelight nor groundbreaking roles. As head of the Federal Reserve from 2014 to 2018, Yellen has already served a stint as arguably the world’s most powerful woman.

She also stands out among the leading contenders as someone who would attract broad support and would be ready to hit the ground running in the middle of a crisis without much on-the-job training.

Added bonus: Yellen would likely be welcomed by investors because she’s a known quantity and the markets boomed during her tenure leading the Fed.

“Janet Yellen is brilliant and has a track record for being unflappable,” Greg Valliere, chief US policy strategist at AGF Investments, said. “She seems to be popular in all factions, from the financial markets to Main Street.”

Getting America back to work

As Fed chief, Yellen ignored inflation hawks who (incorrectly, in hindsight) pushed her to rapidly raise interest rates. Instead, she patiently waited to hike rates to allow more time for the economy to heal from the Great Recession and boost employment.

With interest rates at zero, the Fed has limited power today to further bolster the economy and address inequality. But at Treasury, Yellen could quarterback fiscal policy at a time when it’s the only game in town.

“A Yellen-led Treasury would use the fiscal firepower of the United States to return to full employment,” said Joe Brusuelas, chief economist at RSM US. “Yellen would be a great pick because she speaks to the whole economy.”

Given expectations the US Senate will be run by Republicans, that firepower could be directed towards an infrastructure package designed to create millions of jobs.

“Leaning toward full employment as opposed to unnecessary worries about inflation would create the conditions for what will be called the Biden boom,” Brusuelas said.

The left wing of the Democratic party had been hoping Biden would nominate Senator Elizabeth Warren, a fierce critic of big banks and corporations.

But Democrats can’t afford to lose Warren’s seat in the US Senate. (Massachusetts Governor Charlie Baker, a Republican, would be able to temporarily fill Warren’s seat if she left for the Biden administration.) Besides, it’s not clear that Warren would get confirmed by the Senate.

Yellen, by contrast, was already confirmed by the Senate to her senior positions at the Fed.

“Yellen is quite confirmable,” Valliere said. “Elizabeth Warren is not,”

Critically for Biden, Yellen would be applauded by progressives, who are skeptical of those viewed as too cozy with Wall Street or Corporate America. Biden’s transition team, revealed earlier this month, includes several individuals with a history of taking on big banks.

“Among those not named Elizabeth Warren, Janet Yellen and Sarah Bloom Raskin are high up on the list of people that progressives would find acceptable,” Adam Green, co-founder of the Progressive Change Campaign Committee, told CNN Business on Monday. “And we imagine the whole party would as well.”

Raskin, a former Fed and Treasury official and now a senior fellow at Duke University, has been outspoken on the importance of US financial regulators addressing the climate crisis.

“Janet Yellen would faithfully implement the ambitious agenda Biden campaigned on,” Green said. “Someone from Wall Street would seek every opportunity to undermine it from within.”

However, progressives are more worried about other names floated for Treasury secretary.

Brainard, who is a finalist for the job, is seen as too corporate by some on the left.

Roger Ferguson, another leading Treasury pick and a former top Fed official, would make history as the nation’s first Black Treasury secretary. But Ferguson has spent the past dozen years on Wall Street running TIAA, the $1 trillion money manager. He announced his retirement from that firm last week.

“We do not expect progressives to embrace his nomination given his ties to a financial firm,” Jaret Seiberg, policy analyst at Cowen Washington Research Group, wrote in a note to clients Monday.

By contrast, Yellen’s final act at the Fed was a stunning rebuke of a big bank.

Shortly before her tenure ended, Yellen in early 2018 imposed unprecedented sanctions against Wells Fargo for “widespread consumer abuses.” The penalties, which remain in place today, hobbled Wells Fargo and the bank has yet to recover.

“Janet Yellen has absolutely shown a willingness to challenge corporate power and not be intimidated by big banks,” Green said. “That is a key ingredient as you rebuild our economy.”

Yet Yellen is not viewed as an ideologue who would unfairly go after Wall Street. After all, Wells Fargo (WFC)was an especially bad actor. And in her final years at the Fed, Yellen did not stand in the way of tweaks to make financial regulations less burdensome.

“She appears flexible when it comes to improving the (Dodd-Frank) regime,” Seiberg wrote.

Of course, like all picks, there could be challenges if Biden taps Yellen.

“It’s a very arduous job and she’s 74 years old,” said Valliere, the AGF analyst. “This may be an administration looking for younger people.”

Another challenge for Yellen, who is known as a brilliant academic, would be adopting to a more partisan role. At the Fed, Yellen prided herself on staying above the political fray and sticking to the economic arguments.

“You have to be political in this job,” Valliere said. “Does Yellen have the chops to swim in those waters that are highly politicized?”