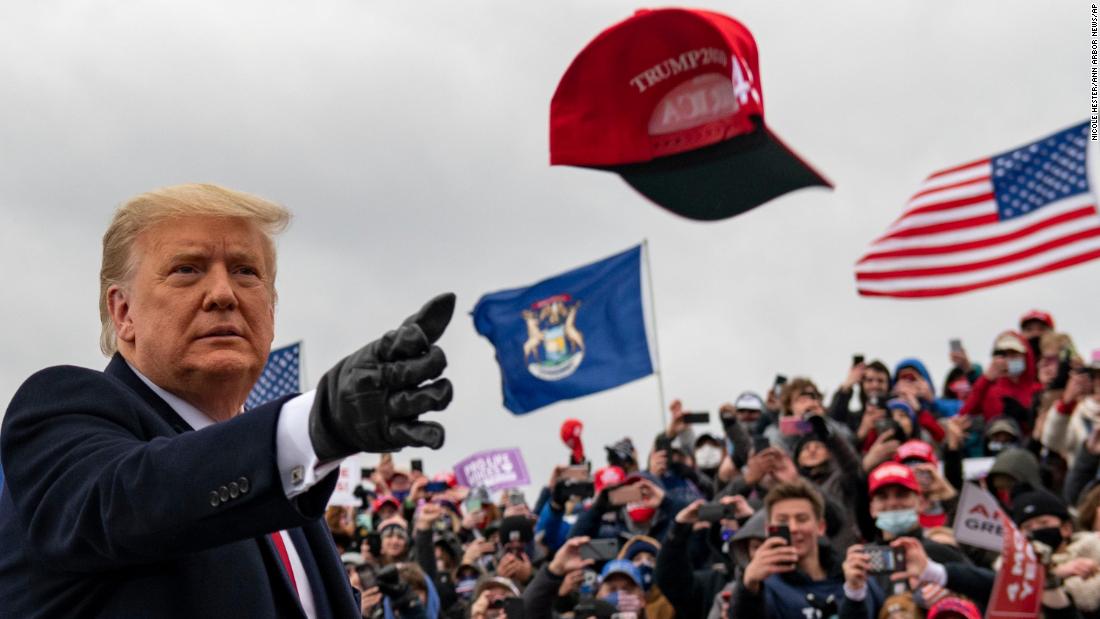 5. The Senate is the thing:

President Donald Trump’s hopes of winning a second term are, well, slim. (See MUCH more on that below.) Which, for Republicans, puts even more pressure on the ongoing fight to keep control of the Senate and, thereby, avoid total Democratic control come 2021.

Most neutral political handicappers see Republicans on the losing end of this fight.

“Our estimate of gains remains anywhere from 2 to 7 seats for Democrats, and it’s only that lowest possible number in the range that would mean Republicans eke out saving their majority,” wrote Cook Political Report Senate editor Jessica Taylor on October 29.
“Overall, Democrats are favored to win the Senate, but their odds of winning the White House are better,” wrote Kyle Kondik of the University of Virginia’s Crystal Ball.

Republican-held seats in Colorado and Arizona seem lost. Maine’s Susan Collins (R) and North Carolina’s Thom Tillis (R) are both slight underdogs heading into Election Day. The Iowa race between Sen. Joni Ernst (R) and Theresa Greenfield (D) seems like the purest toss-up on the board. Both Georgia races as well as Montana, South Carolina and Kansas are also considered competitive.

If the presidential race isn’t close — and that’s a possibility — turn your eye to the battle for the Senate majority. It’s close and it’s hugely important.

No matter how many rallies President Donald Trump holds in these final days before November 3 and no matter how many times he insists that the country is “rounding the corner” on Covid-19, the facts of the virus make clear he is wrong.
More than 99,000 new cases of the virus were reported on Friday, the highest single day total since the virus began in earnest in mid-March. Of the seven highest daily numbers of new cases in the United States, six were in October.
Numbers like those — and projections that suggest nearly 400,000 Americans could be dead by February 1 — fundamentally undermine the President’s attempt to make Tuesday about something (anything) other than Covid-19.

While Trump continues to sell a false idea about the state of our fight against the virus, even some of his most loyal allies are admitting that things are not as he claims them to be.

“We haven’t beaten it. I think let’s all agree on that,” Florida Republican Sen. Rick Scott told CNN’s Jake Tapper on Sunday of the coronavirus. “All of us need to wear a mask, we need to social distance. … We still have a lot of work to do. Especially work to do on testing.”
That echoes a sentiment expressed last Sunday by White House chief of staff Mark Meadows — also in an interview with Tapper. “We are not going to control the pandemic,” said Meadows. “We are going to control the fact that we get vaccines, therapeutics and other mitigation areas.”

Trump’s isolation — from facts and even some of his own closest political allies — on Covid-19 is clear. And if he loses on Tuesday — as seems likely — that defeat will rightly be laid at the feet of his botched handling of this pandemic.

3. The early vote is the story:

It’s impossible to overstate just how stunning the early vote numbers we are seeing across the country actually are.

More than 91 million ballots have already been cast in the 2020 election, well outpacing the 58 million early votes four years ago and comprising, already, roughly two-thirds of ALL the votes cast in the 2016 contest (136.5 million).

In both Texas and Hawaii, more people have voted early in 2020 than voted in total in 2016. And 35 states (and Washington, DC) have crossed their halfway marks for total 2016 ballots cast, including 13 of CNN’s 16 most competitively ranked states — Texas, Georgia, North Carolina, Nevada, Florida, Arizona, Colorado, Wisconsin, Maine, Iowa, Michigan, Minnesota and Nebraska.

Given the polling that suggests Democrats are far more likely than Republicans to vote early, those huge early vote numbers should give former Vice President Joe Biden a lead among banked votes prior to Tuesday.

The question then becomes whether Trump’s turnout operation can match the high numbers we’ve seen in early voting. (Trump’s team has invested heavily in day-of turnout operations while Biden’s side leaned toward an early vote emphasis.)

If turnout on Election Day matches what we have seen in early vote, we could well make a run at the highest turnout presidential election in modern history — when 65.7% of eligible voters cast votes in the 1908 race between William Howard Taft, who won in a landslide, and William Jennings Bryan.

Unlike President Donald Trump, who has a very narrow set of paths (path?) to get to 270 electoral votes (see below), Joe Biden has a slew of ways to get to that magic number.

Here’s his easiest route to the presidency.

Start with the 203 electoral votes that are regarded as solidly in Biden’s camp. Then give him Nevada (6 electoral votes) and Colorado (9) where demographics are trending hard away from Trump’s version of conservatism. That’s 218 electoral votes.

Now move the traditional Democratic states in the upper Midwest — Minnesota (10), Michigan (16) and Wisconsin (10) — for Biden. While Trump carried Wisconsin and Michigan in 2016 — and came close in Minnesota! — there’s little data that suggests he might repeat that feat on Tuesday. (Trump is running closest in Minnesota of that trio, and, according to the Real Clear Politics polling average, he still trails Biden by almost 5 points.) That’s 254 electoral votes.

Which brings us to Pennsylvania and its 20 electoral votes. If Biden wins the state where he was born, that’s 274 electoral votes — and the White House.

Such a scenario would allow Biden to lose Florida, Georgia, Texas, Arizona, Iowa and Ohio and still be elected president. Like I said, he’s got a lot of paths to the White House.

President Trump is, without question, an underdog — and a clear one — going into Tuesday’s election. But, a long shot is not a no shot.

And there is a somewhat plausible — emphasis on “somewhat” — electoral map that gets him to 270 electoral votes and a second term.

Here’s how: Give Trump the 125 electoral votes that are solidly in his camp, centered in the upper Plains states and the South.

Then give him battleground states that have traditionally favored Republicans at the presidential level: Texas (38 electoral votes), Georgia (16), Ohio (18) and Arizona (11). That gets Trump to 208 electoral votes.

No Republican has won the White House in nearly a century without winning Florida, and for Trump to win he needs the Sunshine State — and its 29 electoral votes — too. Which gets Trump to 237 total.

And while polls show Iowa (6) and North Carolina (15) quite close, Trump won them both in 2016, so give him the benefit of the doubt there. (The polling in Iowa looks better for Trump than the polling in North Carolina at the moment.) That’s 258 electoral votes.
At which point, it would all come down to Pennsylvania, which appears to be the state in the upper Midwest that Trump carried in 2016 where he has the best chance of winning again. (Polling in Pennsylvania give Biden a low — but steady — single-digit edge.) Win Pennsylvania and Trump is at 278 electoral votes, and a second term is his.

Yes, the above scenario has a lot of “ifs” in it. And would require Trump to pull the sort of inside straight he did four years ago. But it isn’t impossible to imagine it happening — even if it’s far from the likeliest scenario.

Amid Thailand’s Protests, a Feared Tool to Protect the Monarchy Returns