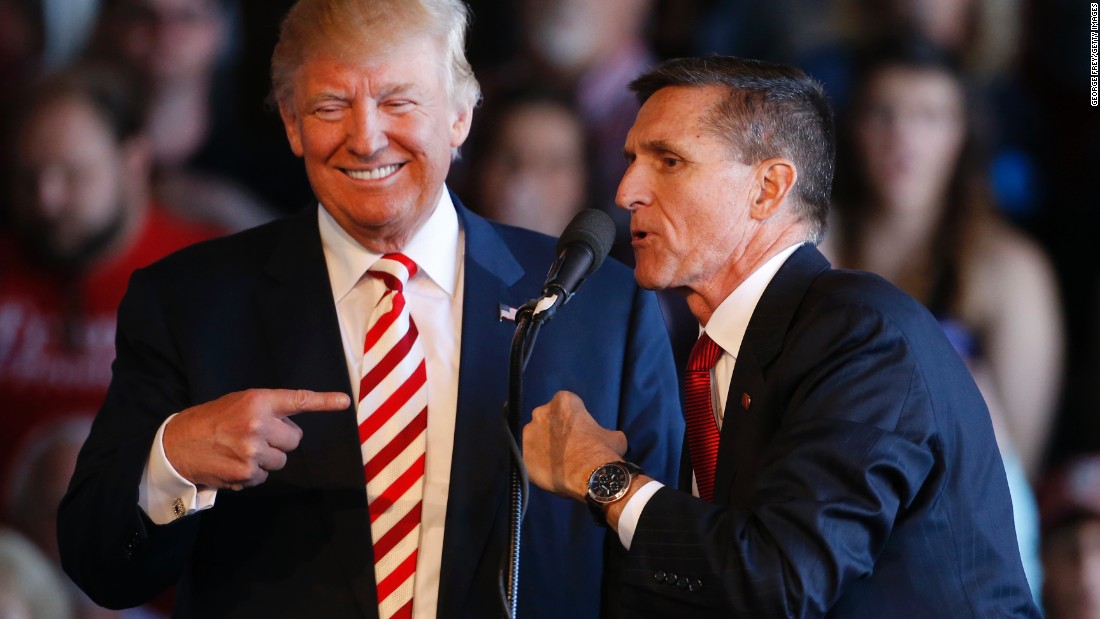 Flynn’s rise, fall and — sort of — reclamation — function as fitting bookends of Trump’s four years in the White House, a testament to the hubris, loyalty and borderline lawlessness that sit at the heart of the most radical presidency in modern history.

That Flynn wound up in the Trump White House at all is telling.

His initial appeal to Trump was twofold: 1) Flynn was a high-ranking military officer who had served as the head of the Defense Intelligence Agency and 2) Flynn had been removed from that job during the Obama administration after a series of clashes with other government officials.

Trump’s adoration of the military coupled with his desire to cast himself as the exact opposite of Barack Obama in every possible way drew him to Flynn. And Flynn delivered. After a somewhat low-profile career in intelligence, Flynn suddenly blossomed as a hard-edged partisan — willing to say almost anything about Democratic presidential nominee Hillary Clinton, and anyone else who got in Trump’s way.

“Lock her up,” Flynn said of Clinton in a wild — and wildly well-received — speech at the 2016 Republican National Convention. “You’re damn right. There’s nothing wrong with that. Lock her up! You know why we’re saying that? If I did a tenth of what she did, I would be in jail today.”

By the end of the 2016 campaign, Flynn was Trump’s preferred warm-up act at the raucous rallies he held all over the country. He knew how to stir the crowd to a boil — and Trump loved him for it.

Which is why it came as no surprise that just 10 days after he beat Clinton in 2016, Trump named Flynn as his national security adviser. “General Flynn is one of the country’s foremost experts on military and intelligence matters and he will be an invaluable asset to me and my administration,” said Trump in a statement announcing the move.
And then, suddenly, Flynn was gone. Just 23 days after Trump became President on January 20, 2017. (In retrospect, Flynn’s tenure lasted more than two Scaramuccis.) He was forced to resign as national security adviser, according to Trump, for lying to Vice President Mike Pence about the nature and depth of his conversations with Russian officials during the presidential transition.

“He didn’t tell the vice president of the United States the facts and then he didn’t remember, and that’s just not acceptable,” Trump told reporters by way of explanation. “I fired him because of what he said to Mike Pence.”

Within the year, Flynn had pleaded guilty to lying to the FBI about his contacts with the Russians. As CNN wrote on December 1, 2017:

“According to an FBI statement, Flynn communicated with then-Russian Ambassador to the US Sergey Kislyak after being asked by a senior Trump transition official to find out how foreign governments stood on a coming UN Security Council resolution about Israel. The prosecutors did not name any transition officials.”

In the wake of Flynn’s guilty plea, Trump changed his story almost immediately.

“I had to fire General Flynn because he lied to the Vice President and the FBI,” Trump tweeted on December 2. “He has pled guilty to those lies. It is a shame because his actions during the transition were lawful. There was nothing to hide!”

So, did Trump fire Flynn because he had lied to Pence? Or the FBI? Both?

While that question lingered, Flynn largely dropped off the radar. He was cooperating with Robert Mueller’s investigation into Russian meddling in the 2016 election and the possibility of collusion between the Trump campaign and the foreign government.

Then things shifted. In early 2020, Flynn sought to recant his guilty plea, with his legal team accusing prosecutors of “bad faith, vindictiveness, and breach of the plea agreement.”

Suddenly, Flynn was, again, a cause celebre in Trump’s world — an innocent man done wrong by reckless and out-of-control investigators and prosecutors desperate to enforce their own political agendas. There was never any evidence that those involved in Flynn’s guilty plea acted in any sort of unethical manner. But that didn’t deter Trump.

By May, Trump’s Justice Department had dropped the entire case against Flynn — a remarkable move given that he had pleaded guilty, under oath, to lying to federal investigators as part of a probe into a foreign government’s attempts to influence a presidential election.
“Is James Comey and his band of Dirty Cops going to apologize to General Michael Flynn (and many others) for what they have done to ruin his life,” Trump tweeted in June about the former FBI director who he fired in May 2017. “What about Robert Mueller and his Angry Democrat Cronies – Are they going to say, SO SORRY? And what about Obama & Biden?”

For Trump, Flynn was the poster child of “deep state” persecution. Flynn’s life had been ruined, in Trump’s telling, by partisans hell-bent on damaging his presidency. For Trump, Flynn was an innocent victim of a much broader conspiracy against him.

That story, of course, overlooked the fact that Flynn had — just as a reminder — pleaded guilty to lying to the FBI and cooperated with Mueller’s investigation. And had done so under oath. On more than one occasion.

Seen through that lens, Trump’s decision to offer a full pardon to Flynn on his way out of the White House makes perfect sense. Trump sees his own story in Flynn. Both men were loathed by the political establishment, outsiders because they wouldn’t play by the accepted rules of a corrupt bureaucracy. They were punished for their loyalty, for their unflagging belief in their own righteousness. They are the real victims here — of a power-obsessed establishment scared to death of losing its grip on the levers of government.

Trump and Flynn have more in common than either is likely willing to acknowledge, too. Both played fast and loose with facts, and pushed hard against the boundaries of acceptable (and legal) conduct.

The similarities between the two men are undeniable. Which raises this question: Having pardoned Flynn, might Trump turn the power of the pardon on himself before he leaves office?