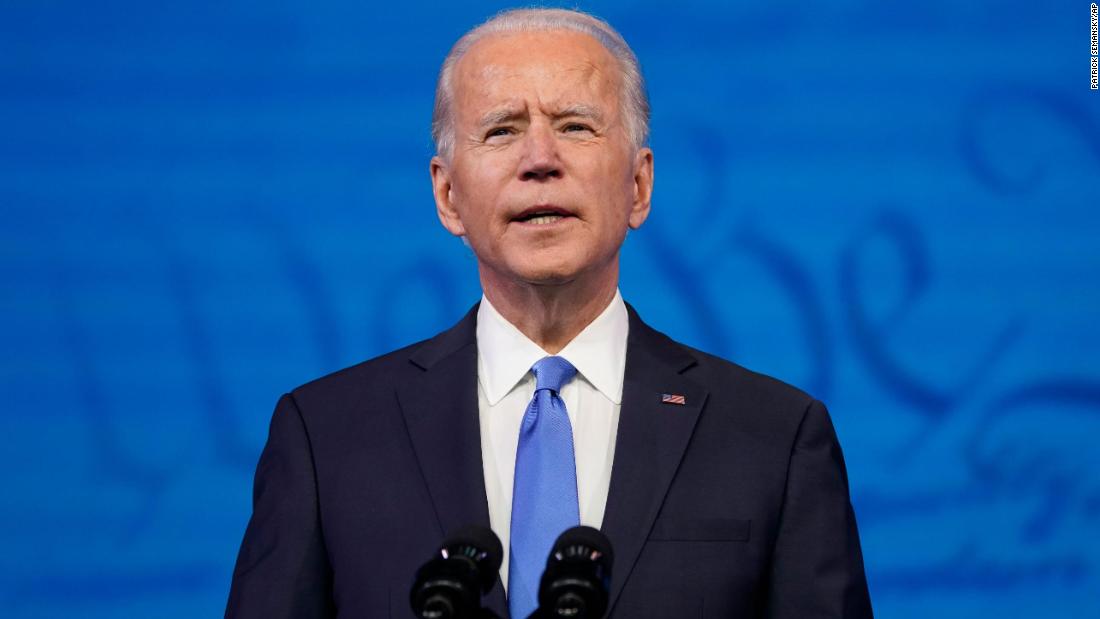 After weeks of measuring his words to avoid worsening a political inferno as President Donald Trump tried to steal his election win, Biden made clear on Monday that it’s time to move on. Hours after the Electoral College confirmed that he will serve as the 46th president, Biden made his most forceful attempt yet to create the symbolism of a peaceful transfer of power.

“The integrity of our elections remains intact. Now it is time to turn the page as we’ve done throughout our history. To unite, to heal,” Biden said.

It was a speech that signaled to the people of the United States and the rest of the world that the most disorienting post-election period in modern election history is over. In it was a message to Trump that efforts to discredit the election have failed, and a finger wag at Republicans still cowering before the outgoing President. Biden’s comments were also a necessary display of authority and leadership from a man who will take office at the height of crisis.

None of this can make Trump admit he lost. But as Biden said: “The flame of democracy was lit in this nation a long time ago. And we now know that nothing — not even a pandemic or an abuse of power — can extinguish that flame.”

‘It reminds me of the old apartheid days’

While the world’s wealthiest nations are snapping up vaccine deals, nearly 70 poor countries will only be able to vaccinate one in 10 people at best during 2021, according to an international watchdog. And when wealthy countries begin to reopen under protection of the vaccine, the unvaccinated citizens of poorer countries risk getting locked out entirely, reports CNN’s David McKenzie. “It reminds me of the old apartheid days where a black African needed a pass to get out of his ghetto and get into the city,” said the University of Cape Town’s Professor Gregory Hussey. “The notion of no one left behind, it is a lot of balderdash at the end of the day.”

As a real estate developer, Trump spent his life skirting the edges of the law. As President, he thought the nation’s top law enforcement official ought to serve him before the nation — he wanted a clone of Roy Cohn, his former fixer and a notorious mafia lawyer for whom loyalty to clients meant a willingness to break any rule. So it’s no surprise that even the loyal Attorney General William Barr ended up resigning on Monday, almost a month before the end of Trump’s term.
Barr facilitated many of Trump’s political schemes, but earlier this month drew the line at endorsing his baseless claims of election fraud. Just like his predecessor Jeff Sessions, Barr has now paid for that flash of honesty with his job. (In his resignation letter, however, he said allegations of voter fraud would continue to be reviewed.)

Barr plans to leave before Christmas, so get ready for a wild 20 days in January. Whether he jumped or was pushed, Barr will doubtless be glad to protect whatever reputation he has left from any association with the expected avalanche of ethically dubious presidential pardons.

We’re near the darkest moment of America’s harrowing winter. But Dr. Anthony Fauci has a message: Summer is coming.

America’s top infectious diseases specialist — a voice of fact-based reason during the Trump administration’s disastrous response to the pandemic, gushed with optimism as America got its first doses of a Covid-19 vaccine on Monday. “We have successfully done what people would find to be the unimaginable,” he said, at a Center for Strategic and International Studies virtual event.
That mankind sequenced a new virus in January and was able to inject an effective vaccine against it that same year was a “historic, unprecedented achievement,” Fauci said. The talismanic expert, who will have an expanded role in the Biden administration, also predicted on MSNBC on Monday that the US could reach herd immunity by the end of the second quarter of 2021 — meaning there’s a chance for summer holidays, family visits, trips to restaurants, big crowds at sports events and evenings at the theater by the middle of the year.
But Monday’s moment of hope also coincided with a tragic reminder of America’s failure to contain the pandemic so far: Even as those first vaccinations were performed, the United States recorded its 300,000th death from Covid-19. Tens and even hundreds of thousands more people could die in the US before most Americans get vaccinated. “That’s the worst public health catastrophe in 102 years — since the 1918 pandemic,” Fauci said.

Analysis: The 15 most notable lies of Donald Trump’s presidency

What will Biden do first and how will he do it?