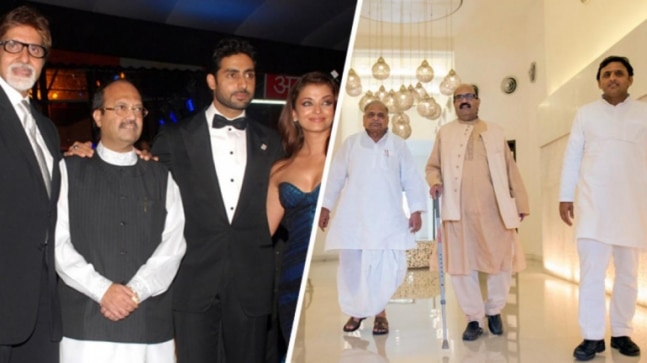 Having no family political background, Amar Singh managed to become a very important figure in Indian politics from late 90s to 2010s with highly-placed contacts in every party, Bollywood, and even among the business conglomerates.

Former Samajwadi Party general secretary Amar Singh passed away at the age of 64 on Saturday evening in Singapore after a prolonged illness. Amar Singh was reportedly in Singapore for a second kidney transplant.

Born in Azamgarh, he had a humble beginning as a young member of the Congress’ ‘Chhatra Parishad’ in Kolkata, where his family ran business, and then become the face of Lutyens’ Delhi’s politics of political machinations, as he helped the UPA-1 government survive a no-confidence motion in the Lok Sabha in 2008 as the Samajwadi Party backed the Congress-led dispensation.

Having no family political background, Amar Singh managed to become a very important figure in Indian politics from the late 90s to 2010s with highly-placed contacts in every party, Bollywood, and even among the business conglomerates.

Condolences poured in for the former Rajya Sabha member who died on Saturday after facing health-related issues for over a decade.

Prime Minister Narendra Modi wrote on Twitter: “Amar Singh Ji was an energetic public figure. In the last few decades, he witnessed some of the major political developments from close quarters. He was known for his friendships across many spheres of life. Saddened by his demise. Condolences to his friends & family. Om Shanti”.

Amar Singh Ji was an energetic public figure. In the last few decades, he witnessed some of the major political developments from close quarters. He was known for his friendships across many spheres of life. Saddened by his demise. Condolences to his friends & family. Om Shanti.

Defence Minister Rajanth Singh expressed his condolences on Amar Singh’s death. In a tweet, Rajnath Singh said he is saddened to hear about the death of Amar Singh. “He had friendly relations with all political parties.”

Just months ago, Amar Singh had scotched rumours of his death by posting a video titled “Tiger Zinda Hai!!” on Twitter and had said that he was awaiting surgery in a Singapore hospital and would be back soon.

Singh had a long association with the Samajwadi Party before being expelled from it in 2010.

Amar Singh came into prominence in India’s political circles in late 1990s, particularly after his ‘chance’ meeting with Mulayam Singh Yadav on a flight.

Amar Singh was already a member of an elite club of businesspersons with high-profile connections. He had his business interests in Uttar Pradesh, Maharashtra, Kerala, Arunachal Pradesh and in many other states of India.

Amar Singh’s business ranged from alcohol to road building to power generation. His father had a flourishing business in Kolkata, where he dealt in building materials and hardware.

In his 14-year-long first stint with the SP from 1996 to 2010, Amar Singh built an extensive network for the party and was frequently seen with celebrities, from Anil Ambani to the Bachchans, to Subrata Roy.

When the Samajwadi Party came to power in Uttar Pradesh in 2003, Singh organised various meets of the UP government with industrialists and film personalities who also invested in the state.

It is said that Amar Singh had organised a visit of former US President Bill Clinton to Lucknow through the Clinton Foundation in 2005 when Mulayam Singh was the chief minister of the state.

Amar Singh was a key leader in SP at a time when the party moved to support the Congress-led United Progressive Alliance (UPA) government in 2008, after the Left Front withdrew from the government over a proposed nuclear accord with the United States.

Singh’s name even emerged in the alleged cash-for-votes scam liked to the 2008 vote on the no-confidence motion in Lok Sabha and he was arrested in 2011.

Singh even floated his own political party, Rashtriya Lok Manch, in 2011, and fielded candidates in 360 of the 403 seats in Uttar Pradesh in the 2012 Assembly polls. However, his party did not manage to win even a single seat in the election. He joined the Rashtriya Lok Dal party in March 2014, contested the general elections that year from Fatehpur Sikri, Uttar Pradesh in 2014 Indian general election and lost.

Amar Singh was also very close to the Bachchans. However, in 2016, their relationship hit a rough patch after Singh went public with his complaints against Jaya Bachchan, a Samajwadi Party leader.

When Amitabh Bachchan’s name cropped up in the Panama leak, Amar Singh had said, “There is stoic silence on part of Mr Bachchan on Panama case which will make a nayak look like khalnayak.” Singh went on to add that as a fan, he wanted his hero, Amitabh Bachchan, to be clean.

However, in February this year, Amar Singh took to Twitter to say that he regretted his ‘overreaction against’ Amitabh Bachchan and the Bachchan family.

“Today is my father’s death anniversary and I got a message for the same from @SrBachchan ji. At this stage of life when I am fighting a battle of life and death I regret for my over reaction against Amit ji and family. God bless them all (sic),” Singh had said on Twitter.

Amar Singh created a unique nexus of politicians-actors-businessmen in Uttar Pradesh. Mulayam Singh Yadav, Amitabh Bachchan and his close friend and chairman of the Sahara India Parivar have organised several events/programmes together and even backed each other in every which way.