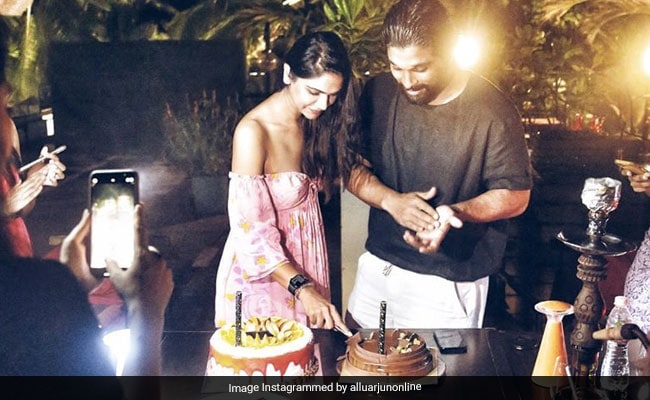 Allu Arjun made wife Sneha Reddy’s birthday all the more special by sharing a super cute wish for her on his Instagram profile. On Tuesday, the actor posted a picture from Sneha’s birthday festivities, in which she can be seen cutting the birthday cakes (there were 2), while Allu Arjun cheers for her. “Many, many happy returns of the day to the most special person in my life… Wish to spend more and more birthdays with you. Happy birthday cutie,” wrote Allu Arjun. In the comments section, the actor’s fans wished Sneha. For the celebrations, Sneha opted for a pink dress and she looked stunning in it.

Allu Arjun, on his 9th wedding anniversary, shared a throwback picture of Sneha and he wrote in his note: “Nine years of marriage. Time is getting over fast. But love grows every day.” Allu Arjun and Sneha got married in 2011 and the couple are parents to Ayaan and Arha.

On his birthday this year, sharing the title and the first look of his film Pushpa, Allu Arjun wrote: “First Look and the title of my next movie Pushpa. Directed by dearest Sukumar garu. Music by dearest friend Devi Sri Prasad. Really excited about this one. Hoping all of you like it.”

Princess Diana’s engagement ring, which Prince Harry wanted to keep, given to Kate Middleton by William