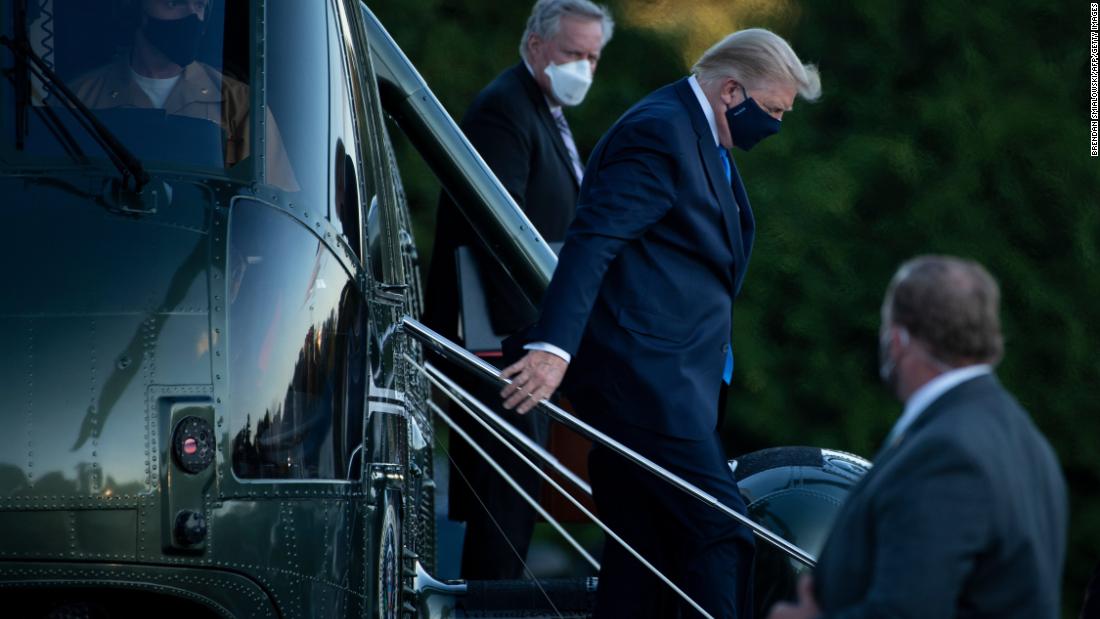 “The White House is fully committed to providing transparent and regular updates on the President’s condition and recovery,” Judd Deere, a White House spokesman, said in a statement.

A decision was made by senior officials to schedule his departure after markets closed to avoid an inevitable tumble, two people familiar with the matter said.

Looking tired and somewhat pale, Trump walked past the cameras he has stopped for so many times with a small wave, and boarded.

At the most fraught moment of Trump’s presidency — or of any presidency in decades — the White House is facing a credibility crisis with dramatic repercussions for Americans’ confidence in their government and its leadership.

Inside some areas of the White House, the lack of information about Trump’s condition is causing concern as aides fear speculation and panic could fill the void, some of those officials said. On Friday evening, as the President was being flown to Walter Reed, several high-placed government officials — including a Cabinet official and two senior Republicans — had not been briefed fully about the situation, the officials told CNN.

Instead, many even inside the White House and the wider administration are relying on news reports to glean information about the President’s health. That includes several White House allies who believe they could have potentially been exposed to coronavirus over the past week, but have not been contacted with instructions from the President’s medical team.

At a late morning news conference on Saturday, the President’s physician offered a rosy portrait of a man on the mend but repeatedly evaded questions about Trump’s condition, including whether he’d been placed on supplemental oxygen over the past days and what his highest recorded temperature has been. He offered a timeline that appeared to place Trump’s diagnosis well before it was publicly disclosed only to later say he misspoke.

“This morning the President is doing very well,” Dr. Sean Conley said. “At this time, the team and I are extremely happy with the progress the President has made.”

Moments later, another person familiar with Trump’s condition offered a stark and very different portrait of the President’s health to a group of reporters gathered at the hospital: “The President’s vitals over last 24 hours were very concerning and the next 48 hours will be critical in terms of his care. We are still not on a clear path to a full recovery.”

The second official was granted anonymity by the small group of reporters who traveled with the President and isn’t known to the wider group. Chief of staff Mark Meadows was the only other White House official present when doctors came out of the building Saturday at Walter Reed National Military Medical Center ahead of the news conference.

A day earlier, Meadows told reporters at the White House that Trump was experiencing only “mild symptoms.”

The disparity in how Trump is faring made for an astonishing gap in Americans’ knowledge of their leader’s health. For a White House and President that have continually evaded the truth while providing alternative versions of reality, the situation amounted to a grave culmination of eroding public trust that could have serious real-world ramifications.

Though he initially downplayed it, Trump himself was spooked after he tested positive for coronavirus and has become increasingly alarmed by his diagnosis as he developed symptoms, such as a high fever. His physician told reporters Saturday that the President was now fever-free.

Trump has also been frustrated that he cannot address the media himself and has been critical of what those who are speaking publicly for him have said, people familiar with the matter said.

Inside the White House, officials said they have been kept in the dark about how Trump is faring and the severity of his condition. He has not been seen by most officials since he returned from a fundraiser in New Jersey late Thursday afternoon. Some of the presidential military valets and residence staff that directly serve the first family were ordered to quarantine at home following Trump and Melania’s positive test results.

Some officials, along with several of Trump’s allies outside the White House, said they were frustrated by the lack of transparency being offered by the administration. Trump’s own children have also been alarmed by his diagnosis, under the initial impression that his condition wasn’t serious.

The Trump campaign has been another source of disorder since the campaign manager, Bill Stepien, tested positive for coronavirus. Stepien put his deputy, Justin Clark, in charge of operations while he’s quarantining, but without a campaign manager or candidate to campaign for, officials have struggled to determine what the next steps should be. Staff convened on conference calls over the weekend.

Trump has been seen only once since announcing he had contracted coronavirus, when he departed the White House on Friday afternoon. Moments beforehand he taped an 18-second video from the White House Diplomatic Room appearing tired and looking pale but insisting he is doing “very well.”

Trump himself, with the support of his advisers, said that if he went to the hospital he wanted to be seen walking to his helicopter under his own power to demonstrate he was still able to function and that he remained capable of running the government, according to an administration official. Presidents typically fly aboard Marine One when traveling to Walter Reed, which is situated just outside Washington in Bethesda, Maryland.

On Friday, CNN reported Trump had been running a fever. Later in the day, sources said Trump had had trouble breathing. Trump’s physician, Navy Commander Dr. Sean Conley, repeatedly refused to say Saturday whether Trump had been administered supplemental oxygen at any point, saying only that he didn’t require it on Saturday nor on Friday when he was at Walter Reed.

“None at this moment and yesterday with the team, while we were all here, he was not on oxygen,” he said, seeming to leave open the possibility Trump required oxygen at the White House on Friday before leaving for the hospital.

At no point did officials publicly disclose what the anonymous official stated at the hospital on Saturday afternoon: that Trump’s status was “concerning.” And White House officials were insistent on Friday and Saturday that no transfer of power to Vice President Mike Pence was currently being considered.

Speaking to reporters in the White House driveway, Meadows insisted he was sure Trump would enjoy a “very quick and speedy recovery” and that he would “remain on the job.”

He also seemed to acknowledge that Trump himself was closely monitoring how his health was being portrayed in the media.

“He’s in the residence now, and in true fashion he’s probably critiquing the way that I’m answering these questions,” Meadows said.

This story has been updated to include a statement from the White House.

One Biden pick may have a harder time being confirmed. Here’s why – CNN Video