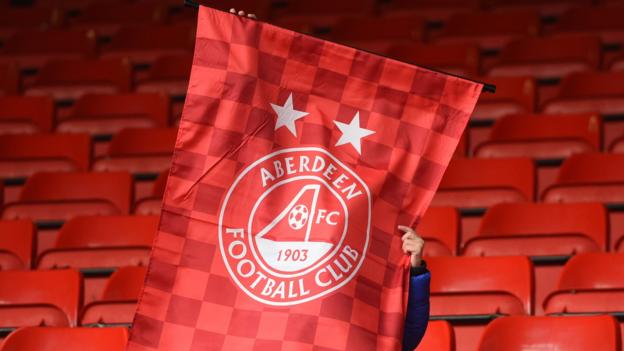 It started with the news that the city of Aberdeen had been locked down on Wednesday following a cluster of coronavirus cases.

By Thursday night, eight Aberdeen players were self-isolating, two having tested positive for Covid-19, and the Scottish government was criticising their behaviour.

So what do we know? What does this mean for the nascent Premiership season? And what is going to happen next?

What do we know?

Two Aberdeen players have tested positive for Covid-19 as part of the club’s mandatory, twice-weekly private testing regime. The first had his confirmed by a follow-up NHS test and the other is awaiting further results.

Both are asymptomatic but are self-isolating. So, too, are six team-mates who were in “close proximity” to them on Saturday night at a pub in the city that has since been linked to a cluster of cases.

At the time, bars and restaurants were open to the public but have been closed in Aberdeen since 17:00 BST on Wednesday. People have been told not to visit the city and those living there face travel restrictions.

The player with the first positive test will self-isolate until 15 August, with the remaining seven doing so until 19 August. All eight will miss Saturday’s match with St Johnstone.

Is that game still going ahead?

As it stands, yes. Late on Thursday, the Scottish FA and Scottish Professional Football League joint response group confirmed the fixture remains on the calendar after talks with the Scottish government.

The authorities had previously confirmed matches were not at risk amid Aberdeen’s lockdown because clubs are “within a sporting bubble” and are being tested twice a week.

It means Derek McInnes’ side – who lost their opener to Rangers last weekend – will travel to McDiarmid Park without the eight unidentified players. And those squad members will also miss the visit of Hamilton Academical on Wednesday, as well as the trip to Celtic Park on 15 August.

So what are the club saying?

Aberdeen chairman Dave Cormack says the situation is “a harsh reminder of the severity and speed of spread of the virus”.

The club will be conducting a full investigation and have “reinforced the club’s Covid-19 protocols” with all players and staff members to “remind everyone of what is, and what is not, acceptable in the current climate”.

Manager McInnes is scheduled to host a news conference on Friday afternoon at which further details may be forthcoming.

What about the government?

It did not hold back.

In a statement, a Scottish government spokesperson said there had been “a clear breach of the rules” and that they were “disappointed by the actions of these individuals who have put at risk the return of professional football in Scotland”.

Pubs and restaurants were open on Saturday, but patrons have been repeatedly told to adhere to social distancing measures. It is unclear whether Aberdeen provided their players with any guidance about where they should and should not go when away from the football club.

“The Scottish government is clear that it is only by following the rules and keeping people safe that football is able to continue,” the statement continued. “No-one wants to see the season put at risk.”

Minister for public health and sport Joe Fitzpatrick has called a meeting with the SFA and SPFL on Friday and officials will meet with all club captains and managers to “emphasise the guidelines and their importance”.

What does this mean for the season?

As Cormack says, this is a “harsh reminder”, but it appears little will change for Premiership clubs. Twice-weekly testing will continue and negative tests must be returned before players can take part in games.

Football is unlike golf’s European Tour, which has formed a biosecure ring around its UK-based restart.

Competitors and others involved in tournaments cannot go anywhere other than their hotel and the course. John Catlin and his caddie broke those rules by going to a restaurant and were disqualified.

The SPFL cannot enforce such regulations on Premiership clubs and players, meaning further positive tests are entirely possible and further disruption could lie ahead.