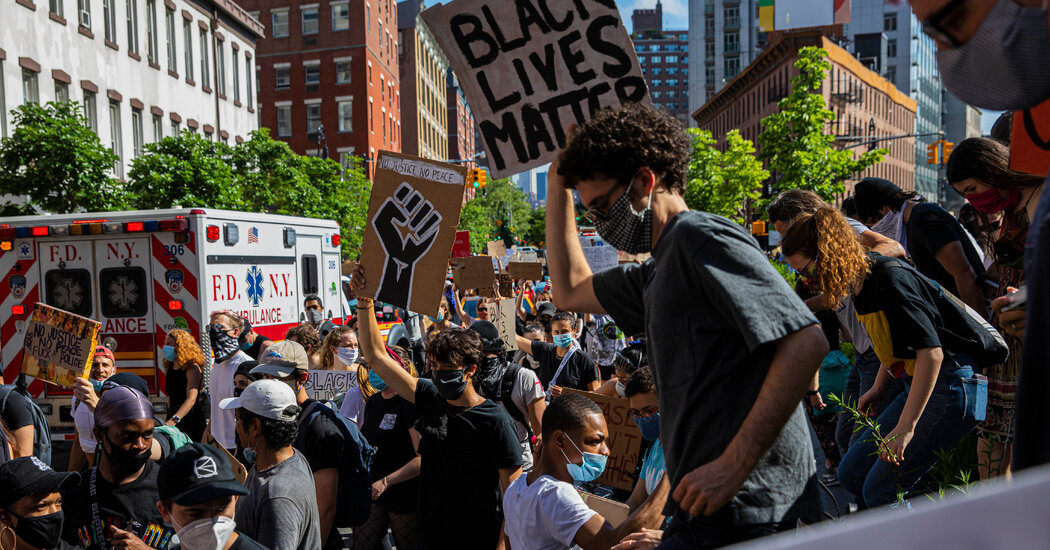 Weather: Sunny, but cool and blustery, with a high in the low 50s and gusts up to 28 miles an hour.

Following the death of George Floyd in Minneapolis in May, thousands of New Yorkers poured into the streets for weeks, protesting police brutality and a justice system that many felt had long discriminated against communities of color.

In response, Mayor Bill de Blasio declared in June that the city needed to build a system that held police officers accountable if they engaged in misconduct.

“I want the public to see it, know it, and have confidence in the disciplinary process of the N.Y.P.D.,” he said.

But a New York Times analysis of newly released police records going back more than two decades shows that the Police Department has routinely ignored, overruled or downgraded punishments recommended by an independent oversight agency.

In about 71 percent of 6,900 serious misconduct charges, the Police Department reduced or rejected recommendations for stiff discipline of officers. The pattern remained largely unchanged under Mr. de Blasio, who took office in 2014.

[The agency brought misconduct charges against a total of 3,188 police officers since 2001; just seven officers were fired.]

The oversight agency, the Civilian Complaint Review Board, was established in 1993 to address complaints that officers rarely faced consequences for harassment and brutality.

It investigates civilian complaints but has no power to impose discipline; instead, it presents evidence to an administrative judge employed by the Police Department. The police commissioner has the final say on discipline.

Still, it is one of the ways that victims of police misconduct hold officers accountable.

The data, released earlier this year for the first time in the review board’s history, provides the most detailed portrait to date of allegations of serious police misconduct resulting in charges since 2001.

Among the findings, the data shows that the review board brought misconduct charges against 3,188 police officers. Of those officers, 798 were put back onto the street by the department after receiving additional instructions, training or warnings, and 890 were not disciplined at all.

Some officers had multiple findings against them but continued to rise in the department. Only seven officers facing charges were fired.

In one Harlem apartment building, residents have been left without heat and hot water for weeks. [N.Y. Post]

A pregnant woman had an emergency C-section after she was shot in Crown Heights; both the baby and the woman are expected to survive. [PIX 11]

Gov. Andrew M. Cuomo said the Trump administration’s plan to distribute a vaccine would perpetuate inequity, and he threatened to sue if the plan was not changed. [N.Y. Daily News]

And finally: Broadway’s back … for the Macy’s Thanksgiving Day Parade

Broadway may be dark for several months to come, but actors from four closed shows have been given the opportunity — a rare one during the coronavirus pandemic — to put on their costumes and perform. The event: Macy’s Thanksgiving Day Parade.

The term “parade” is being used loosely this year. The helium-filled balloons and star-studded floats will not be traveling their typical jam-packed, two-and-a-half-mile route starting at West 77th Street. They will be gliding just one city block down 34th Street, near the flagship department store.

But even if it’s more television show than crowd fest this year, the parade will provide a brief respite from the doldrums of a darkened Broadway, with performances by the casts of “Hamilton,” “Mean Girls,” “Jagged Little Pill,” and “Ain’t Too Proud: The Life and Times of the Temptations,” all shows that have not taken the stage since March.

Parade organizers said the Broadway performances will be filmed sometime in the next few weeks but aired with the rest of the parade on the morning of Nov. 26.

This is the 94th Macy’s Thanksgiving Day Parade, and it has been reimagined in almost every way. In a typical year, it has between 8,000 and 10,000 people working the route, said Susan Tercero, the event’s executive producer. This year, there will be about 1,500.

And there will be an in-person audience of zero. (The area surrounding the parade route will be shut down, even during planning, so there will be no opportunity for street viewing).

It’s Monday — what are you thankful for?

It was fall 1969, and I was a college student in Manhattan. One afternoon, I met a friend for lunch at a busy dairy restaurant on Broadway.

The place was full of businessmen from the garment district. The tables were close together, and the patrons were packed in like sardines.

As my friend and I enjoyed our lunch, it was hard not to eavesdrop on the two men at the next table. They were talking about a client, discussing intimate business information and throwing around numbers.

After a while, I couldn’t help myself. I turned to them.

“Excuse me,” I said, “but you’re talking about my father.”

We’re experimenting with the format of New York Today. What would you like to see more (or less) of? Post a comment or email us: [email protected].

Opinion: What made ‘Celebrating America’ soar