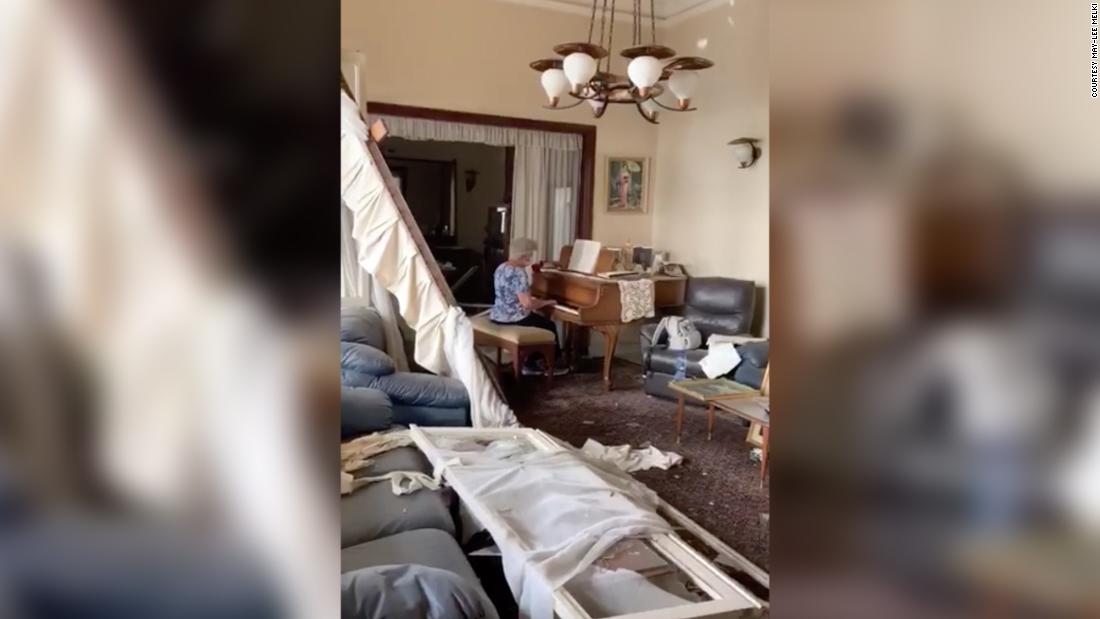 But for a few minutes, the world paused and things seemed peaceful as the 79-year-old played “Auld Lang Syne” on the only item seemingly left unscathed — her beloved piano.

Thankfully, the grandmother wasn’t home during Tuesday’s massive explosion that killed at least 135 people and injured 5,000. Her husband was also not home, but his store was destroyed, according to their granddaughter May-Lee Melki.

Neither were injured in the blast.

When they returned on Wednesday, however, they were devastated to see that the home that they had lived in for 60 years was in shambles.

“It survived the entire civil war… It witnessed bullets go through it,” May-Lee Melki told CNN from her home in Virginia. “They have rebuilt themselves over and over again.”

But the destruction, over a mile from the explosion site, was nothing like they’ve ever seen before, according to their granddaughter.

As soon as May Abboud Melki entered the house, she headed straight to her piano, which had been a gift from her father on her wedding day.

As about a dozen volunteers swept up the glass and tried cleaning up the house, she sat at the piano and started playing.

“She pushed through the pain and tried to have a few moments of peace,” her granddaughter said.

She started with the classic “Auld Lang Syne,” but then started playing Arabic hymns, which prompted the volunteers to gather around and start worshiping. “To see her lean into her faith, lean into God was something that was a strong message to her community and our family immediately,” her granddaughter said.

After May-Lee Melki was sent the video by her mother, she shared it to Facebook, where it’s garnered nearly 20,000 shares. The video has been shared even more widely on Twitter, where people have commented that it shows the persevering spirit of the Lebanese people.

Melki says she felt compelled to share the video because it, “was able to express a symbol of hope and peace among all of the despair.”

Tuesday’s explosion in the Lebanese capital tore through the city, wiping out streets and damaging buildings as far as 6 miles away. The exact cause of the ignition is unclear, but it has been linked to a warehouse storing thousands of tons of an unsecured explosive material called ammonium nitrate.

Analysis: Trump stumbles through final appeals to women as he vows to get their husbands back to work