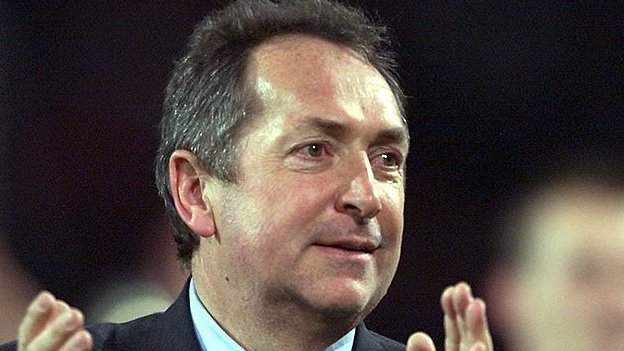 Gerard Houllier, who has died aged 73, may just have been destined to manage his beloved Liverpool Football Club.

Houllier came to Anfield on a joint-management ticket with incumbent Roy Evans on 16 July 1998 – but the seeds of his arrival were sown 30 years earlier when he stood on the Kop watching Bill Shankly’s great Liverpool side while teaching French at the nearby Alsop Comprehensive School.

He deserves to be remembered as the man who had the strength of character and talent to revolutionise Liverpool, making them successful once more when he took sole control after the inevitably unworkable arranged marriage with Evans came to an end four months later.

Houllier’s arrival at Liverpool was the brainchild of the great Anfield administrator and chief executive Peter Robinson, through a friendship established over many years.

Robinson immediately thought of Houllier when it was decided to revamp the club’s coaching structure.

The man known to all at Anfield as ‘PBR’ admitted he was on “a fishing expedition” when he contacted Houllier, who had been heavily linked with Celtic and Sheffield Wednesday after working with France’s World Cup-winning team in 1998.

He rang, ostensibly to congratulate him on a job he had not even taken, while insisting it would be a mistake to consider moving anywhere other than Anfield.

Houllier, not realising such a vacancy existed, jumped at the opportunity and it is not stretching the point to say he subsequently worked a brilliant transformation from the flaky ‘Spice Boys’ era into the development of a fiercely disciplined, winning team.

I was fortunate enough to be the first journalist to meet Houllier after his arrival at Anfield and it was the start of a personal friendship that revealed him to be not only a perfectionist and driven football obsessive but also a warm, generous, thoroughly decent man.

Robinson rang the Liverpool Echo offices that morning in July 1998 and said: “There is someone in my office I think you might like to meet.”

No hints were given but when Robinson issued the summons you acted and after a short drive to Anfield the office door opened to reveal a beaming, clearly overjoyed Gerard Houllier.

He was Liverpool’s new “joint manager” and poured out his emotion at coming to Liverpool before saying: “I must go now. I want to get to Melwood to meet my new family.”

And that is how he treated Liverpool Football Club. It was his family. He defended it passionately and wanted the best for it at all times.

As this is a very personal recollection, there are many stories that confirm his humour and all-consuming desire to be a winner at Liverpool, something which eventually took its toll on his health.

Shortly after his arrival, the Liverpool Echo was running a somewhat heavy-handed promotional campaign which involved plastering large images of journalists on the back of buses, with inevitable consequences and insults.

Houllier once greeted me at Anfield with a smile and the words: “I pulled up behind your face at a set of traffic lights yesterday. It is not a good sight in real life but at that size and while I am driving… are you trying to damage Liverpool Football Club?”

He set about removing overbearing influences such as Paul Ince and Neil Ruddock from Liverpool’s dressing room in search of a team in his own image and likeness.

Houllier formed what might be termed a two-man “transfer committee” with his ally Robinson which resulted in discussions that regularly went into the early hours.

Officials from other clubs were often startled to receive calls at midnight and beyond inquiring about players. The decision had been taken on a signing and the manager, along with one of the finest administrators the game has known, wanted the ball to start rolling.

In came Sami Hyypia, Stephane Henchoz and Dietmar Hamann, to be followed later by superb acquisitions such as Markus Babbel and Gary McAllister.

Houllier was also instrumental in injecting even more professionalism and focus into the veins of outstanding youngsters such as Jamie Carragher, Steven Gerrard and Michael Owen.

If anyone doubts the influence Houllier had on Liverpool when he was there and also afterwards, just ask those iconic figures how highly they regarded him.

It took some time to get it right and there were occasions when his 24/7 approach to Liverpool reared its head.

The phone rang at my flat at 7am the following morning and I heard my future wife Lynne – who Houllier knew to be a fanatical Liverpool fan – involved in a lengthy discussion about the non-substitution and its implications.

Mistakenly assuming it to be a family member, it was a shock to hear the caller was Houllier who had been up all night at Melwood fretting over what he regarded as a poor decision that had cost Liverpool a landmark win.

He wanted the fan’s perspective as well as the journalist’s, as befitted a man who chose to live in the Sefton Park area of the city as he wanted to be in among supporters so he could see and hear what they felt.

When Euro 2000 was looming, I was asked if Houllier would do a tournament preview piece for the new BBC Sport website – which I assumed would be traditional fare tipping the winners and dark horses.

Houllier jumped at the chance but insisted it could not be done over the phone. We had to meet in person at Melwood at 7pm.

Patrice Bergues, Houllier’s friend, assistant and a calming presence who often talked down some of his more outlandish ideas, stood behind Liverpool’s manager out of his eyeline smiling with his arms outstretched.

He knew there were no half-measures when it came to asking Gerard Houllier to talk football. Sadly, restraints on space meant so much of his meticulous dossier went unseen.

It was fitting that Houllier was in his element inside Liverpool’s Melwood training headquarters. He not only rebuilt Liverpool’s team but rebuilt the bricks and mortar of the ramshackle old training ground.

Houllier carried on the process started by Graeme Souness in modernising the facilities, taking an almost paternal pride in giving a guided tour, some areas designed to his specific demands, including a lack of pillars so no players could hide behind them.

Attention to detail. Everywhere. No margin too fine.

And it all came to glorious fruition in the treble-winning season of 2000-01 when Liverpool beat Birmingham City on penalties to win the League Cup, Arsenal to win the FA Cup and Alaves 5-4 via a ‘Golden Goal’ to win the Uefa Cup.

It was just reward for the endless hours Houllier spent at Melwood and around the globe seeking ideas, potential new players, driving those he called his “family” on.

Houllier’s Liverpool were at a peak.

He was at the top of his game, a high-class side was emerging but he paid the price when he was taken seriously ill during a game against Leeds United at Anfield in October 2001 and required 11 hours of heart surgery.

He was, under doctors’ orders, told to stay away from football and turn his thoughts away from the game. Two things he found impossible.

The phone calls were heavily rationed as he recovered at home but when they were made the pleasantries soon turned to talk of Liverpool and football.

And sometimes the reporters understandably asked to steer clear of contacting him found themselves on the receiving end of calls asking why they had not been in touch.

He retained the personal touches even in convalescence, special occasions for journalists and associates such as the birth of a child still being greeted by a large bouquet of flowers and a card.

Houllier insisted on a professional relationship with all those he dealt with but never forgot the personal side.

He accepted himself that he came back too soon from his serious illness as Liverpool manager, returning in March 2002 on a tide of Anfield emotion for a 2-0 Champions League win against Roma.

The sure touch was not quite there, an uncharacteristic error of substituting the anchor Hamann with the forward Vladimir Smicer with Liverpool on course for qualification in the quarter-final against Bayer Leverkusen contributing to a late elimination.

Houllier’s signings also started to go awry, particularly when passing on Nicolas Anelka, who had excelled in a loan spell at Liverpool, and signing El-Hadji Diouf.

He won the League Cup once more against Manchester United in Cardiff in 2003 but Houllier’s time at Liverpool was running out of steam despite the same Herculean efforts and tireless work ethic that was in his DNA.

Houllier had his flaws, particularly an oversensitivity to some justified criticism from former players, but this was perhaps driven by his own frustration that the great successes, and the Premier League title he wanted so badly, were not in sight.

He was sacked at the end of the 2003-04 season but it was with sadness all round. He left Liverpool in fourth place and in the Champions League.

It remained a source of great pride that Liverpool won the trophy against AC Milan in Istanbul in 2005 with many of the players he left behind and who he had guided so carefully.

Even after his departure, he remained fiercely loyal to Liverpool and their supporters despite facing criticism for his style of football in his closing days.

Houllier’s time at Aston Villa, where he was appointed in 2010, was also curtailed by health problems but he was once again a hugely popular figure with those who dealt with him.

It was, however, his time and successes at Liverpool for which he will be best remembered.

The passing years have seen Houllier get the greater credit he merits for work that stretched way beyond silverware to actually changing a culture.

Houllier was still seen at Anfield, often on European nights. The respect and affection in which he was held still obvious, the bear-hug greeting still as warm and friendly.

Gerard Houllier was an outstanding manager and a fine, decent man who will be very sadly missed.