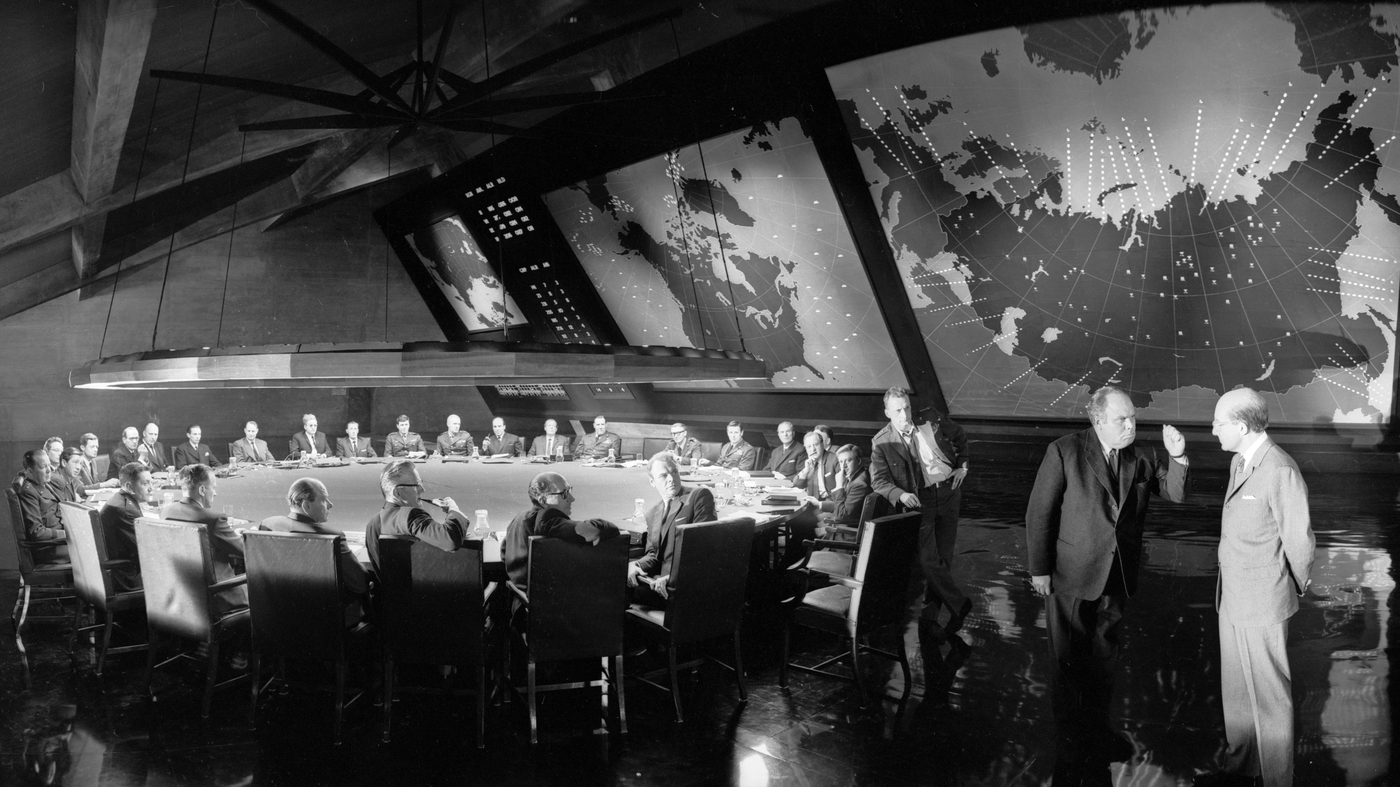 On Aug. 6, 1945, the use of the first nuclear weapon to obliterate the Japanese city of Hiroshima reset history, marking the dawn of the Nuclear Age. Over the decades, artists of every stripe have had to reckon with a world forever altered by nuclear weapons — Hollywood included. Above, Stanley Kubrick’s 1964 film, Dr. Strangelove or: How I Learned to Stop Worrying and Love the Bomb.

On Aug. 6, 1945, the use of the first nuclear weapon to obliterate the Japanese city of Hiroshima reset history, marking the dawn of the Nuclear Age. Over the decades, artists of every stripe have had to reckon with a world forever altered by nuclear weapons — Hollywood included. Above, Stanley Kubrick’s 1964 film, Dr. Strangelove or: How I Learned to Stop Worrying and Love the Bomb.

On the Beach, the 1959 film version of Nevil Shute’s cataclysmic bestseller, kicks into gear with a newscast designed to transport 1950s movie audiences from the nuclear age into a post-nuclear age:

“Scientists disagree as to when radiation will reach Australia,” intones the newscaster. “The atomic war has ended. But the prime minister reports no proof of survival of human life anywhere except here.”

The film then tags along as the world’s last submarine crew, captained by Gregory Peck, searches the globe for signs of humanity. The ship’s Geiger counter readings are dire even in mid-Pacific.

Then, in a scene met by hushed silence from ’50s audiences, the sub surfaces in the San Francisco Bay to discover an unbombed but irradiated ghost town. Nothing moving, no sign of life. It was the first portrait most movie patrons had seen of what the world might look like without them.

Shortly after leaving the port, the sub’s crew asks its resident egghead, played by Fred Astaire, how he thinks the war started, and with a faraway look in his eye, he articulates the basic scenario for scores of nuclear thrillers to come:

“Somewhere some poor bloke probably looked at a radar screen and thought he saw something, knew that if he hesitated one-thousandth of a second, his own country would be wiped off the map. So he pushed the button and the world went …” Astaire looks helpless as he says the next word, “crazy.”

For 1959 audiences, On the Beach took place in the not-too-distant future: 1964, to be precise. And that year in real life turned out to be a watershed for Cold War nuclear thrillers.

An intensifying arms race and the Cuban missile crisis had primed audiences for alarmism, and Tinseltown provided a double whammy: war mongering generals taking over the U.S. nuclear arsenal in Seven Days in May, and just weeks later, Failsafe, which fleshed out Astaire’s accident scenario with frantic calls from Henry Fonda’s White House to a soon-to-be vaporized Kremlin.

Also released in 1964 was an acidly comic counterweight to these serious films — the one true classic the genre has produced — Stanley Kubrick’s Dr. Strangelove, or How I learned to Stop Worrying and Love the Bomb. Kubrick combined the crazed-general scenario and the mistake scenario, had Peter Sellers play multiple roles so he could embody all sides of the argument, and came up with a satire that could say the unspeakable by disguising it as a joke.

By the time Slim Pickens rode his A-bomb to that last roundup in the sky, the audience had laughed at the existential absurdity of a weapon that only lets you win by also killing yourself.

The nuclear thriller had reached maturity.

Compared with a film like Dr. Strangelove, the earlier, first films of the nuclear genre look decidedly silly. In 1954, the U.S. government produced a chirpy little civil-defense tutorial called Atomic Attack in which a family’s quiet suburban life is rudely interrupted when New York City, some 50 miles away, gets vaporized. Featuring a very young Walter Matthau, the film pictures post-nuclear survival as downright inconvenient.

Hollywood, meanwhile, had become fascinated by reports that radiation could cause cells to mutate, a notion it took to illogical conclusions in unforgettably cheesy special effects flicks. Huge lizards, spiders and ants, began emerging from the deserts near New Mexico’s White Sands Nuclear Test Site, as scientists — who were the real villains, having gotten us into this mess — very slowly put two and two together.

Audiences have always gravitated to these escapist films rather than serious fare like Fail Safe, which may be why nuclear proliferation in the real world couldn’t hope to match Hollywood’s version.

By the early 1970s, it wasn’t just governments that had atomic weapons in movies. Practically everyone Agent 007 met seemed to have enough enriched plutonium to blow up at least a small corner of the globe. Meanwhile, Mad Max was playing demolition derby in dusty post-nuclear landscapes, and WarGames had teen hacker Matthew Broderick matching wits with the Pentagon’s Doomsday computer.

Apart from the Terminator movies, the whole notion of nuclear annihilation seemed to have receded on the big screen. In the thriller True Lies, when a mushroom cloud rose above the Florida Keys, it was being used the way fireworks usually are, to underscore a kiss between Arnold Schwarzenegger and Jamie Lee Curtis.

Big bangs are what big blockbusters are all about, of course, which has mostly left the real-world implications of nuclear weapons to television.

Threads, produced by the BBC, served as a wake-up call to British audiences. It depicted a U.S. vs. Soviet Union nuclear battle in which America’s NATO allies amounted to collateral damage. And while the effects were enough to traumatize audiences in Britain, they couldn’t hold a candle to the ones in ABC TV’s $7 million dollar schocker, The Day After.

At a time of heightened East/West tensions, the two-hour show (the last hour presented without commercial interruption) was designed to show the aftermath of an all-out nuclear war. And did it ever.

I remember the shock of seeing the blast in that telecast, and then the horror, a moment later, of a second blast — a second mushroom cloud rising behind the characters — then a third. It was a possibility no duck-and-cover drill in my youth had ever mentioned.

By film’s end, nearly all the characters are dead or dying — an outcome witnessed by 100 million Americans on Sunday, Nov. 20, 1983, at the time, the largest audience ever to watch a television film.

And the day after The Day After, there was a new national dialogue about nuclear weapons — one that affected public policy. Then-President Ronald Reagan wrote in his diary of being “greatly depressed” by the film. And after signing a nuclear-non-proliferation treaty a few years later, he sent a telegram to the director saying: “Don’t think your movie didn’t have any part of this, because it did.”

None of which kept Hollywood from going its own, more escapist way. Going Reagan one better in Superman IV, The Quest for Peace, Christopher Reeve’s Man of Steel addressed a special session of the U.N. saying, that he’s going to do what governments have been unwilling or unable to do, “rid our planet of all nuclear weapons.”

He then grabbed thousands of Intercontinental Ballistic Missiles in mid-air (the unwilling governments having helpfully launched them) and put them in a big skynet (literally a net in the sky, not the Terminator Skynet) after which he hurled them at the sun.

This was, presumably, good for the planet, less good for blockbustering. After all, if you get rid of the world’s atomic weapons, how’s Will Smith going to neutralize the alien invaders in Independence Day? And in Armageddon, the good guys needed weapons-of-mass-destruction for the destruction-of-a-cosmic-mass (an asteroid on a collision course with Earth).

Not to mention that superhero flicks would have to look elsewhere for big finishes — no Dark Knight Rising with A-bomb in tow, to spirit it to sea and save Gotham. No Ironman slamming a sky-portal shut with a nuke in The Avengers. No Wolverine (working, as always, on a more intimate scale) saving a single Japanese soldier at Nagasaki from the blast only he knew was on the way.

All of those plots are admittedly pretty silly, and again, not responsive to our own era’s heightened world tensions.

Still, if Hollywood isn’t making new nuclear films, some harrowing old ones have recently surfaced — declassified just as they were turning to dust. They’re footage shot by military researchers of nuclear tests conducted between 1945 and 1962.

More than 100 are available for viewing on YouTube from the Lawrence Livermore National Laboratory, which is analyzing them with computers and discovering that the readings made by scientists decades ago — readings on which computer simulations of current weaponry are based — are off by as much as 30 percent.

Still, their mushroom clouds are breathtaking, the power they document unfathomable. And when you realize the point of digitizing them is to help modernize nuclear stockpiles, their power as cinema is … well, I’m not sure there’s a word for that.

‘I finally found myself in the ashes’