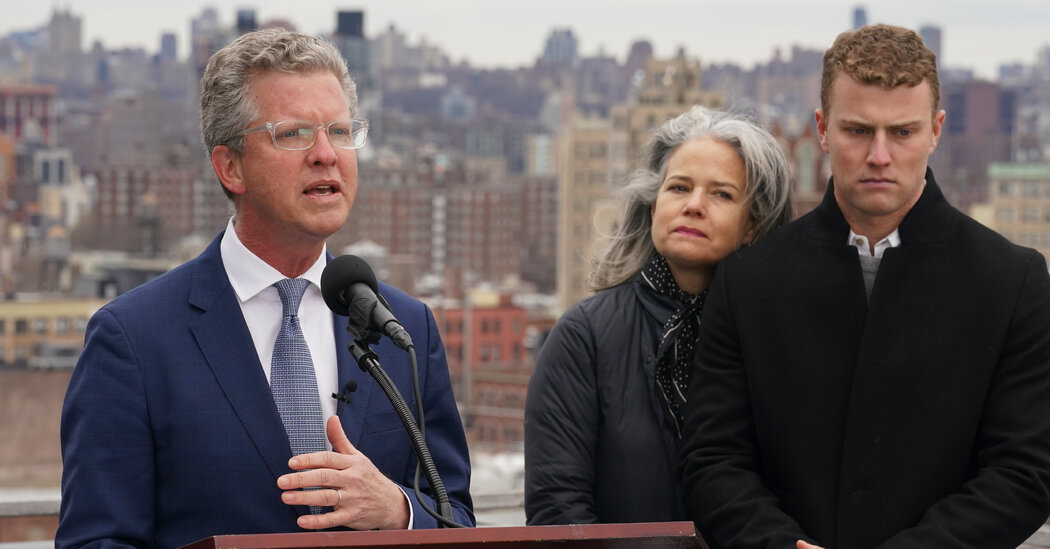 One of the traditions of modern-day election cycles is the two-step dance that candidates perform in launching their campaigns. First comes the string of obvious clues: a listening tour, speeches delivered at Sunday church, and perhaps even an announcement of an exploratory bid.

Then comes the actual launch, normally filled with live fanfare, music and hope, and accompanied by an introductory campaign video.

In the race for New York City mayor, both parts of the two-step dance were on display last week. Shaun Donovan, a former housing secretary and budget director under President Barack Obama, officially launched his campaign on Tuesday; two days later, Kathryn Garcia, who recently stepped down as the city’s sanitation commissioner, did the same.

Amid those intentional campaign rollouts, a seemingly unintentional launch also materialized on Thursday: Representative Max Rose registered a mayoral campaign committee with the city Campaign Finance Board. Two days later, in an interview with The New York Times, he confirmed that he had begun an exploratory bid.

If that wasn’t enough, next year’s dozens of races — including the mayor’s — also saw a curious $1 million contribution, although it was not immediately clear which candidate might benefit the most from it. Here are five takeaways from the week that was.

The real estate developer Stephen M. Ross, who has been casting about for a way to influence next year’s elections, appears to have found a means to do so.

The Hudson Yards developer donated $1 million in December to a new independent expenditure committee called Common Sense NYC, according to state finance records. The committee has raised nearly $1.5 million so far, the rest of it from real estate and business executives like Jack Cayre of Midtown Equities and Isaac Ash, the chief executive of United Legwear and Apparel, each of whom donated $100,000.

Business leaders in New York have long been frustrated with Mayor Bill de Blasio, and have been looking for a more business-friendly candidate to support. The pandemic-fueled financial crisis has only deepened the business community’s resolve, and some leaders had successfully encouraged Raymond J. McGuire, a Wall Street executive, to enter the race.

Independent expenditure committees are not allowed to coordinate with a candidate or a campaign. While no one affiliated with Common Sense NYC would comment for this story, a person familiar with its goals — driving the conversation surrounding the future of the city, including its fiscal health, quality of life, public education, infrastructure and homelessness — said it only just began raising money and plans to accumulate significantly more before too long.

That person also said the group was focused on many of next year’s New York City elections, not just the mayor’s race. In 2021, more than 30 of the City Council’s 51 seats are up for grabs, as are the mayor’s and the comptroller’s offices, according to New York City’s Campaign Finance Board.

In the unsexy area of managerial competence, Ms. Garcia and Mr. Donovan are hoping to distinguish themselves from the rest of the field, and from Mr. de Blasio, whose management style has become the subject of intense criticism.

Both leaned heavily on their experience captaining large, complicated bureaucracies — not the flashiest pitch for mayor, but one they hope will resonate at a time of profound crisis for New York City.

Ms. Garcia, Mr. de Blasio’s go-to crisis manager in addition to being his former sanitation commissioner, launched her campaign for mayor with a 14-minute announcement on Zoom and a straightforward message.

“You won’t find a candidate who has more experience in New York City government than me,” she said.

She spoke from the same Park Slope living room from which she has participated in several mayoral forums. She cited her energy, her work ethic and her first notable endorsement, from Harry Nespoli, president of the Uniformed Sanitationmen’s Association.

She called for converting Rikers Island into a composting and renewable energy zone and for electrifying school buses. But above all, she called for good management and “grit.”

“For 14 years, my job has been to solve problems for New York, and I’ve got no plan to stop now,” she said. Ms. Garcia was also the interim head of the New York City Housing Authority, among other duties. But she made no mention of Mr. de Blasio by name.

Two days earlier, Mr. Donovan made his own formal announcement, also by Zoom. He made passing reference to his time working as city housing commissioner, but, like Ms. Garcia, made no explicit mention of the mayor for whom he worked, Michael R. Bloomberg.

Instead, he spoke in soaring tones about equity and New York City resilience, and about his time working for the Obama administration as budget director and housing secretary. He pitched his federal connections as a salve for local problems.

“I know the heart, talent and values of the president- and vice president-elect firsthand,” he said. “The remarkable, diverse team they’re putting together includes many I have been proud to serve with and call my friends.”

On Friday, he rolled out his climate agenda, which called for the city to achieve net zero emissions by 2050, in part by working to close the city’s dirtiest power plants, known as “peaker plants,” and improving bus transportation by creating dedicated busways throughout the city.

It may be a few weeks before the official announcement, but it appears clear that Andrew Yang intends to enter the mayoral race.

Mr. Yang, who was born in New York State and lives in Manhattan, gained a loyal following as a Democratic presidential candidate, largely because of his proposal to give every American a universal basic income.

He has been meeting with political power brokers in the city, and has told some of them that he plans to run. He has also enlisted two prominent New York-based political strategists with ties to Mr. Bloomberg.

As for Mr. Rose, who lost his bid for re-election last month in a conservative district that covers Staten Island and South Brooklyn, he refused to explain or elaborate on his registration with the Campaign Finance Board.

If you want someone with experience and guts and ability to end our broken politics, then I could be your candidate,” he told The Times on Saturday.

Will the next mayor be a public school parent?

Mr. de Blasio is a rarity among New York City mayors: He is believed to be the first mayor in half a century who has had a child in public schools while in office.

His son, Dante, attended Brooklyn Technical High School in Brooklyn, and his daughter, Chiara, graduated from Beacon High School in Manhattan before he became mayor.

A front-runner in the race to replace Mr. de Blasio, Scott Stringer, the city comptroller, has two young sons who attend public schools. He discussed his struggles as a parent during the pandemic in an interview with The New York Times last week. Mr. Stringer has already declared himself a candidate.

Mr. Yang has a son, Damian, 5, who attends a public school. His older son, Christopher, who is 8 and has autism, attends a private school. Both are learning online during the pandemic.

Two others — Mr. McGuire and Maya Wiley, a former top counsel for Mr. de Blasio who has also declared that she is running — send their children to private schools. Mr. de Blasio has often mentioned how navigating the public school system informs his decisions as mayor.

The furor over ranked-choice voting continues

Several members of the City Council’s Black, Latino and Asian Caucus filed a lawsuit in State Supreme Court in Manhattan last week to stop the implementation of ranked-choice voting. It did not take long for repercussions to surface.

The lawsuit charges that voters have not been properly educated about ranked-choice voting and that it will lead to Black voters being disenfranchised. Two Black mayoral candidates, Eric Adams, the Brooklyn borough president, and Raymond J. McGuire, a business executive, have raised similar concerns.

And at a virtual forum about ranked-choice voting for Brooklyn borough president candidates, Robert E. Cornegy Jr., a councilman from Brooklyn, was criticized by his fellow candidates for participating in the lawsuit.

Many of the candidates at the forum, sponsored by Rank the Vote NYC among other groups, supported ranked-choice voting.

Antonio Reynoso, also a councilman from Brooklyn, said the lawsuit would “insert doubt” and discourage Black people from voting because all six council members who filed the suit are Black, and four of them represent Brooklyn.