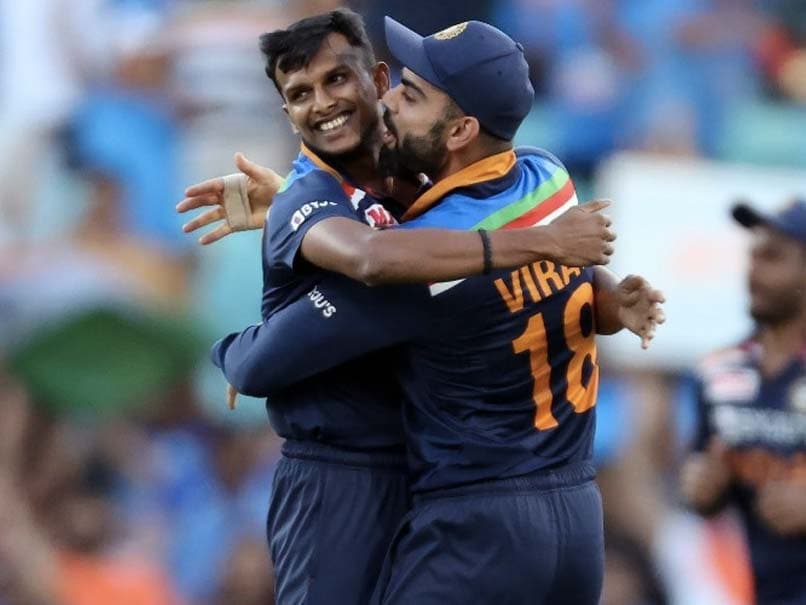 India vs Australia: T Natarajan celebrates a dismissal with Virat Kohli during the second T20I.© AFP


Left-arm seamer T Natarajan has made his pleasure known after being a part of the series-clinching second T20I win at the Sydney Cricket Ground on Sunday. Natarajan had picked the wicket of D’Arcy Short during the Australia innings before the Indian batsmen followed up on his good show to register a six-wicket win. The Indian pacer had also dismissed Moises Henriques in the 19th over and restricted the Australian batsmen from crossing the 200-run mark. This was followed by quality knocks from skipper Virat Kohli and opener Shikhar Dhawan before all-rounder Hardik Pandya helped India chase down Australia’s total of 194/5.

Natarajan on Monday termed his first series win for India memorable and special.

The Left-arm seamer had made his debut in the shortest format of the game in the opening T20I against Australia, two days after playing his first match in international cricket on December 2.

With the win on Sunday, India gained an unassailable 2-0 lead in the three-match series. The dead rubber and final T20I will be played at the same venue on Tuesday.

India will play four Tests against Australia after the conclusion of the T20I series. India skipper Kohli will be playing just one of the four Tests before heading home as he has been granted paternity leave by the BCCI.

Rohit’s availability for the Test series is also not clear as his fitness will be reassessed on December 11 at the National Cricket Academy in Bengaluru.