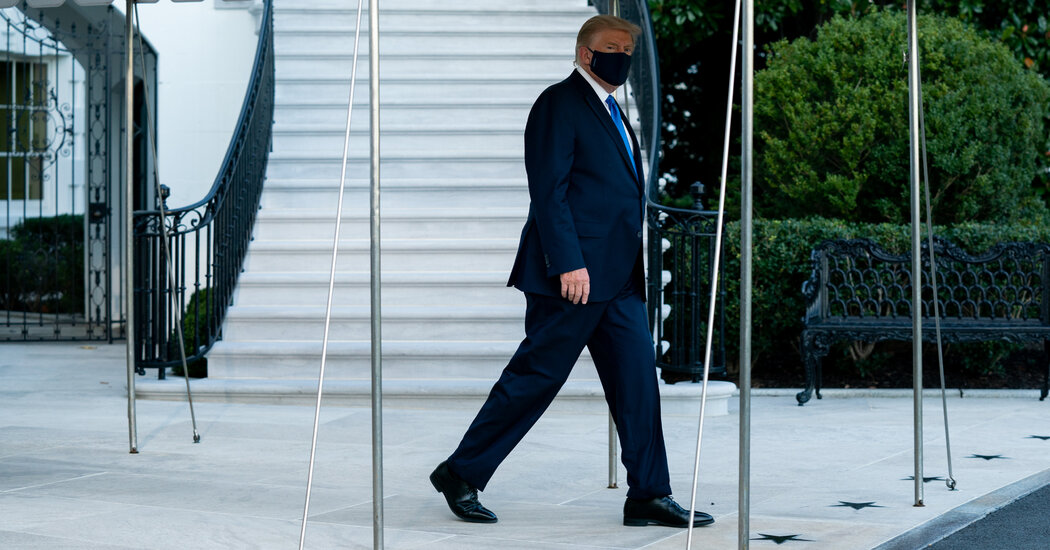 President Trump’s hospitalization has plunged an already volatile race into extraordinary uncertainty, sidelining the president indefinitely with a month until Election Day and making the pandemic a more urgent and delicate issue for Joseph R. Biden Jr.

On Saturday, Mr. Trump remained at Walter Reed National Military Medical Center, where he sought to send a reassuring message that he was “starting to feel good.”

“I think I’ll be back soon,” Mr. Trump, seated at a dark-wood table and wearing a jacket but no tie, said in a video posted on Twitter. “And I look forward to finishing up the campaign the way it was started and the way we’ve been doing.”

But given the uncertain course of the virus, it could be weeks before Mr. Trump can return to the campaign. His aides canceled rallies that were to be held in Florida on Friday and Wisconsin on Saturday and said they would consider future events on a “case-by-case basis.”

Mr. Trump acknowledged that the next few days could be “the real test” in determining his medical condition.

Mr. Biden has for months sought to make the race a referendum on Mr. Trump’s stewardship of the pandemic, but that task has become more sensitive in light of Mr. Trump’s hospitalization.

“I’m in a little bit of a spot here because I don’t want to be attacking the president and the first lady now,” Mr. Biden said at a virtual event on Saturday with members of the Amalgamated Transit Union, adding that he had prayed for the couple’s quick recovery.

Still, Mr. Biden criticized the Trump administration for not requiring transit riders to wear masks and for not doing more to get personal protective equipment for workers. “I promise you, I’m going to get you all the P.P.E. that’s necessary,” Mr. Biden said.

The Trump campaign is not changing its advertising or messaging, even with the candidate in the hospital. The political operation is not bereft of leaders; the campaign manager is still helping run things from afar after testing positive for the virus. Advisers are not showing any evidence of worry, despite public polls showing President Trump still behind in key states he won in 2016.

On the first weekend of the new Trump political reality, the overarching signals were about continuity and resolve, even though the landscape was one of change: rallies canceled in Wisconsin, fund-raising reworked without the incumbent candidate and campaign operations adjusting on the fly.

At 4 p.m. on Saturday, Vice President Mike Pence held a call with the Trump-Pence re-election staff nationwide, trying to rally the troops and lay out the plans for the coming weeks.

Despite the almost unthinkable circumstances for a campaign whose fund-raising, events and political pitches have all been driven by the president himself, Mr. Pence tried to signal that the campaign was trying to proceed as if little has changed.

Matt Gorman, a Republican strategist, said the campaign’s only option was to plow forward.

“The leader of the campaign may be off the field for now,” he said. “But people are voting right now. The blocking and tackling of knocking doors, making phone calls and getting people to the polls must continue. They can’t worry about what they can’t control and must work relentlessly at what they can.”

To compensate for Mr. Trump’s absence, the campaign is trying to deploy as many Trump family members, who are popular with the president’s supporters, as is possible while the president is off the trail.

Justin Clark, the deputy campaign manager, is filling in at the headquarters in Virginia for the campaign manager, Bill Stepien. But Mr. Stepien is working remotely from home, officials said, and telling other staff members that he feels fine. He participated on the call with staff members across the country on Saturday. (Jared Kushner, the president’s son-in-law and a top political adviser, has not needed to play a greater role in the candidate’s absence.)

The campaign hopes to be able to tell a story of what one adviser described as “resolve,” with the president — and several top aides — overcoming a virus that Mr. Trump has for months played down.

Senator Ron Johnson, the Wisconsin Republican who tested positive for the coronavirus this week and whose state has experienced a recent record surge in virus cases, said on Saturday that he continues to oppose mask-wearing mandates.

“He did say today that he continues to oppose mask mandates,” Ben Voelkel, a spokesman for Mr. Johnson, said, confirming a report in The Capital Times, a Wisconsin newspaper, which quoted Mr. Johnson as saying that he preferred “individual responsibility.”

Mr. Johnson told the paper that while masks can help lower the risk of infection, they’re “certainly not a cure-all.”

Public health experts have said masks are critical to slowing the spread of the virus, a message that Wisconsin’s governor, Tony Evers, a Democrat, reinforced while wearing a mask in a video message on Saturday.

“The surges we’re seeing across our state are not an indication that masks don’t work,” Mr. Evers said. “This underscores what we have said all along, which is that masks only work if everyone wears them.”

Three of the four metro areas in the United States with the most cases per capita were in northeast Wisconsin this week, and one hospital in Green Bay, the third-largest city in the state, was nearly full this week.

On Friday night, Mr. Johnson attended a Republican Oktoberfest event in Mequon, Wis., but Mr. Voelkel said the senator “was not informed of his positive test until after the event in question.”

“He wore a mask while he was there, showed up only to speak and remained distanced the entire time,” Mr. Voelkel said.

Even for an election cycle defined by a relentless string of crises and chaos, the amount of time it took for the Senate race in North Carolina, which could determine which party controls the Senate, to fall into utter mayhem was something of a record.

Late Friday night, Cal Cunningham, the former Democratic state senator and Iraq war veteran who has been leading in his bid to oust Senator Thom Tillis, one of the Republican Party’s most vulnerable incumbents, admitted to exchanging flirtatious texts with a woman who is not his wife. That news came nearly three hours after Mr. Tillis announced that he had tested positive for the coronavirus and would close his campaign headquarters, in a devastating blow to his already lagging re-election campaign.

In a normal election cycle, either development alone would have registered as head-spinning.

But taken together, Mr. Cunningham’s scandal and Mr. Tillis’s diagnosis have upended the critical race just a month before Election Day, laying waste to both candidates’ core messages just as they were preparing to make their final appeals to voters.

For Mr. Cunningham, a married father of two, news of his romantic texts with a strategist based in California, reported earlier by The Raleigh News and Observer, was a blow to a carefully cultivated personal image that has been a centerpiece of his campaign. Throughout his race, Mr. Cunningham has leaned heavily on his character and biography, playing up his military service and presenting himself as an inoffensive moderate.

Mr. Tillis, a staunch ally of President Trump, had hoped that his participation in a swift confirmation for Mr. Trump’s Supreme Court nominee could inject his campaign with a burst of momentum and divert attention from the coronavirus pandemic. Now, his diagnosis has called into question whether Mr. Tillis, a member of the Judiciary Committee that will consider the nomination of Judge Amy Coney Barrett, will even be able to attend a high-profile set of confirmation hearings, or vote to confirm her — and indeed whether the proceedings can go on as scheduled at all.

President Trump’s bombshell announcement early Friday morning that he and the first lady had tested positive for the coronavirus has set off a frenzy in the White House and beyond as politicians and operatives who have interacted with Mr. Trump in recent days have raced to get their own tests and, in some cases, report the results.

Here is a quick look at the people in Mr. Trump’s orbit and beyond who have spoken publicly about their health and the virus, taken from official statements, and announcements made on social media and by spokespersons.

Who has tested positive:

Who has tested negative: