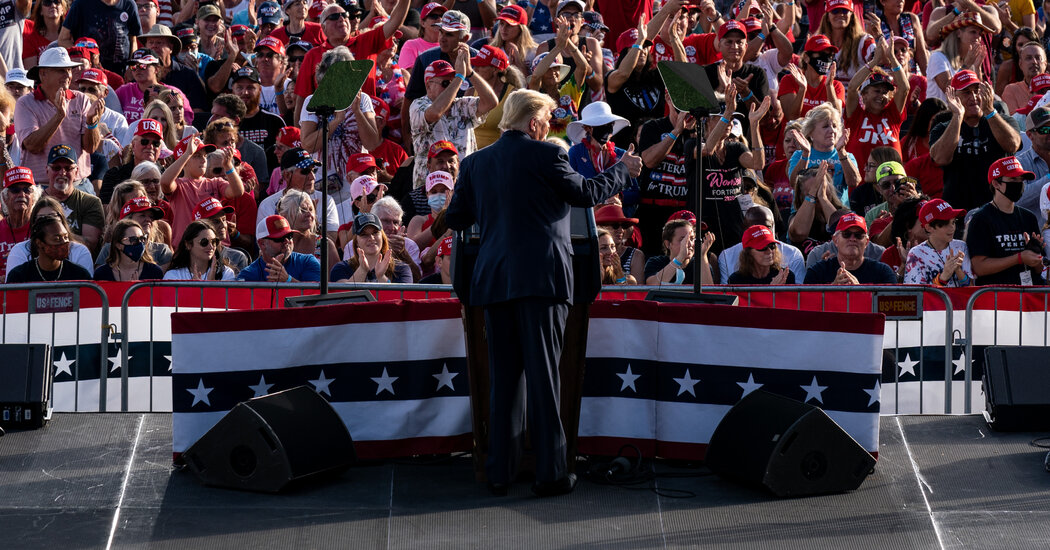 President Trump is seeking to recapture the last-minute energy that lifted him to a surprise win four years ago, undertaking an aggressive schedule of rallies that will bring him to some of the country’s top battlegrounds even as coronavirus cases surge.

The president will start on Saturday in Lumberton, a town in North Carolina, one of the most important states for determining not only the next president but also control of the United States Senate, with Senator Thom Tillis locked in a tight re-election race against his Democratic challenger, Cal Cunningham.

From there, Mr. Trump is off to Circleville, Ohio, outside of Columbus, and then Waukesha, Wis. On Sunday, He will fly to New Hampshire, the lone state on his weekend itinerary that he did not carry in 2016. The hopscotching schedule is reminiscent of 2016, when Mr. Trump flew from state to state for multiple events a day in his private plane.

Except then there was no pandemic, and this time the final stages of the presidential race are coinciding with a surge in cases and hospitalizations. “We’re rounding the corner. It’s going away,” Mr. Trump claimed inaccurately at Thursday’s debate.

The virus’s surge ensures that even Mr. Trump’s well-attended rallies can be a political liability, a reminder to voters fearful of the pandemic of his regular disregard for expert and public health advice.

His rival, Joseph R. Biden Jr., will return to the campaign trail after a week dominated by debate preparations and capped by a speech on Friday in Delaware on the coronavirus, which the former vice president has made a centerpiece of his campaign and his closing argument. His opening line at the debate was counting the 220,000 dead Americans. “Anyone who’s responsible for that many deaths should not remain as president of the United States of America,” he said.

On Saturday, Mr. Biden will make two stops in Pennsylvania, both for drive-in rallies, a new style of event that his campaign has popularized during the pandemic. The first will come in Bucks County, outside of Philadelphia, and the second in the northeastern county of Luzerne, a former Democratic stronghold and one of three Pennsylvania counties that Mr. Trump flipped in 2016.

Pennsylvania is a top focus for the Biden campaign. Along with Mr. Biden’s appearances this weekend, Senator Bernie Sanders will be in western Pennsylvania on Saturday, holding a get-out-the vote event in Pittsburgh and a drive-in rally with the state’s lieutenant governor.

In a sign of Pennsylvania’s potential as the 2020 tipping point, the Biden campaign dispatched President Barack Obama there earlier in the week for his first in-person event of the general election. On Saturday, Mr. Obama will be in Miami for his second in-person event.

With the presidential race hurtling into its final stretch, Joseph R. Biden Jr. sought on Friday to amplify the closing argument he delivered on the debate stage a night earlier, accusing President Trump of failing to stem the ballooning coronavirus crisis and vowing more aggressive federal action for the “dark winter ahead.”

In a speech near his home in Wilmington, Del., Mr. Biden denounced Mr. Trump’s familiar assertion that the pandemic was “rounding the corner” and “going away” even as cases surge across the country, placing the blame for the rising death toll squarely at the president’s feet.

“As I told him last night,” Mr. Biden said of the Thursday night debate, “We’re not learning to live with it. We’re learning to die with it.” He noted the more than 220,000 people who have already died from the virus.

Arguing that the coronavirus “isn’t showing any signs of slowing down,” Mr. Biden repeated with a tone of incredulity Mr. Trump’s comments earlier in the week that he would do “not much” differently if he were given the opportunity for a do-over.

“As many as 210,000 avoidable deaths, and there’s not much he would do differently?” Mr. Biden said, citing figures from a recent study out of Columbia University. “If this is a success, what’s a failure look like?”

During his address, Mr. Biden laid out the immediate steps he would take to rein in the coronavirus if elected. He also said he would ask Congress to put a bill on his desk by the end of January outlining the resources needed for the country’s public health and economic response to the virus.

Mr. Biden said he would ask every governor to institute mask mandates; if they refused, he said, he would work with local officials to get local mandates in place nationwide. And he said he would require masks in federal buildings and on interstate transportation.

Once again connecting the future of the Affordable Care Act to the Supreme Court battle, Mr. Biden warned that overturning the health law would mean people would have to pay for a potential coronavirus vaccine and vowed to make it free for everyone.

A state appeals court in Texas blocked Gov. Greg Abbott from limiting ballot drop boxes to one per county, upholding a lower-court ruling and setting up a likely showdown at the Texas Supreme Court.

The expected appeal by Mr. Abbott, a Republican, to the state’s highest court means the existing additional drop boxes in other counties are unlikely to be in operation immediately, if at all.

This month, Mr. Abbott issued an executive order that limited drop boxes in Texas to one per county, regardless of the county’s population. As a result, major population centers like Harris County, home to 4.7 million people and the second-most populous county in the country, had to consolidate to one ballot drop-off location from 12.

The decision led to a long line of snaking cars around Houston’s NRG Arena, the lone drop-box location for Harris County, and an outcry from voting rights activists, who said that limiting the number of boxes amounted to voter suppression.

But though the edict from Mr. Abbott lessened the options to drop off ballots, voters in Harris County have been turning out in record numbers. According to state records, 6.4 million ballots have already been cast in Texas, and nearly 90 percent of those have been cast in person. More than one million people have voted in Harris County alone.

Many voting rules have changed this year because of the coronavirus pandemic, making it harder than usual to figure out how to cast your ballot. So we did the work for you, in hopes of helping to make sure your vote is counted.

A lawyer for Ivanka Trump and Jared Kushner threatened Friday to take legal action against the Lincoln Project, a super PAC made up of anti-Trump conservatives, unless the group removes a pair of large billboards from Times Square in Manhattan.

One of the billboards shows a smiling Ms. Trump, the president’s eldest daughter, gesturing toward national and statewide tallies of coronavirus deaths.

Another features a smiling picture of her husband, Mr. Kushner, alongside a quote saying that New Yorkers “are going to suffer and that’s their problem.” Below the quote is a series of body bags.

The quote is taken from a Vanity Fair article published in September about Mr. Kushner’s role in the federal coronavirus response. The article claims that Mr. Kushner accused Gov. Andrew Cuomo of failing to “pound the phones hard enough” for coronavirus protective equipment for New York, then added, “His people are going to suffer and that’s their problem.”

The threatening letter from Marc E. Kasowitz, a New York lawyer who represents the couple and has worked for President Trump in the past, called the ads malicious and defamatory.

“Of course, Mr. Kushner never made any such statement; Ms. Trump never made any such gesture, and the Lincoln Project’s representation that they did are an outrageous and shameful libel,” Mr. Kasowitz’s letter read. “If these billboards are not immediately removed, we will sue you for what will doubtless be enormous compensatory and punitive damages.”

The Lincoln Project tweeted out the letter on Friday night, along with a statement that promised to leave the billboards in place.

“Jared and Ivanka have always been entitled, out-of-touch bullies who have never given the slightest indication they have any regard for the American people,” the statement read in part. “We plan on showing them the same level of respect.”

The Times Square billboards were erected this week at the corner of 44th Street and Broadway, as part of a series of advertisements that the Lincoln Project has been running across the country.