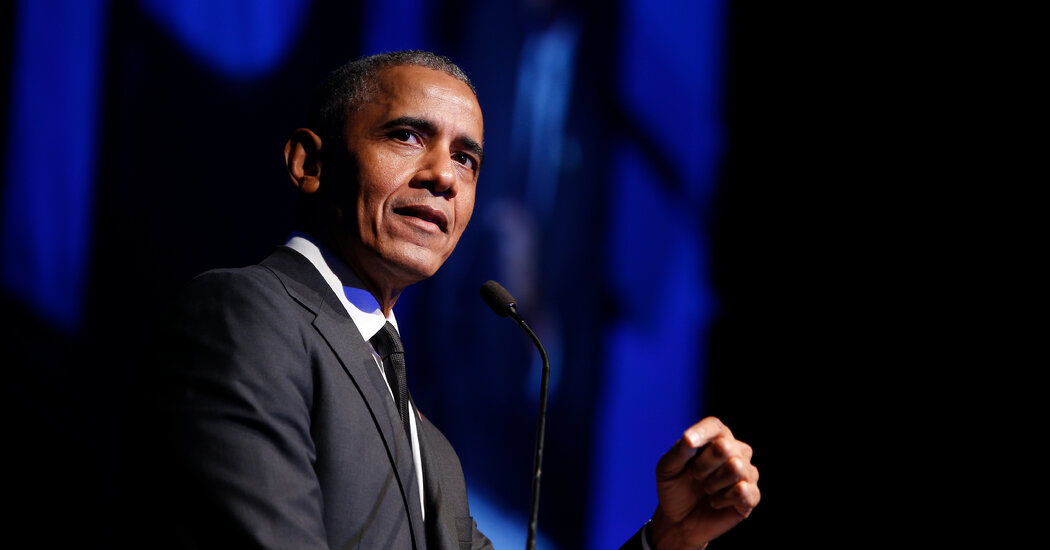 Former President Barack Obama and Senator Kamala Harris of California offered their prayers to President Trump and the first lady, Melania Trump, on Friday evening, colliding with the timing of an emailed fund-raising appeal from the Trump campaign.

Just minutes earlier, Mr. Obama and Ms. Harris, the Democratic nominee for vice president, had opened their virtual fund-raiser by wishing the president and his wife a speedy recovery, with the former president urging all Americans to hope for the president’s recovery even in the middle of a contentious campaign.

The combative tone of the email came hours after the Biden campaign pulled down all its negative ads against the president, though some already in circulation could take time to stop airing.

The Trump campaign has announced no plans to stop its attack ads against the Democratic nominee.

During the online fund-raiser for former Vice President Joseph R. Biden Jr., Mr. Obama told watchers: “Even when we’re in the midst of big political battles with issues that have a lot at stake, that we’re all Americans and we’re all human beings, and we want to make sure everybody is healthy. Michelle and I want to make sure we acknowledge the president and the first lady at this difficult time.”

The two officials, who were joined by the actor Michael B. Jordan, also tried to assuage concerns and dispel misinformation about voting, particularly casting ballots by mail. Mr. Trump has spent weeks waging a disinformation campaign about the integrity of the American electoral system.

All three said they planned to cast their ballots by mail.

Mr. Obama, who rattled off the name of his polling place in Hyde Park, Ill., said he had cast mail-in ballots since winning the presidency, in part to avoid the crowds that slow down lines when he appears.

“When I vote in person, there’s a price,” he said. “It slows down a whole bunch of folks.”

Since March, some of President Trump’s advisers had whispered that there could come a day when the president tested positive for the coronavirus. But it was not an eventuality anyone planned for.

When the day came, early Friday morning, it upended the presidential campaign, and left unanswered questions in its wake.

Mr. Trump is currently at the Walter Reed National Military Medical Center in Bethesda, Md., where officials said he will be monitored for “a few days,” strictly as a precaution.

But one official said that having Mr. Trump leave the White House on his own was preferable to the possibility of being removed with assistance should his symptoms get worse — and his walk to Marine One, the presidential helicopter, which transported him to the hospital, allowed him to be seen, ambulatory, by reporters after a day during which the ubiquitous president was silent.

What happens next is anyone’s guess. Trump advisers hope that he can quickly recuperate and show what one called “resolve” in the face of a virus that has caused a pandemic.

But the second debate between Mr. Trump and former Vice President Joseph R. Biden Jr. is scheduled for Oct. 15, a relatively short time in the life of recovery from the coronavirus.

For now, the reversal of fortune — in which Mr. Biden is out on the campaign trail, and the president, who used to mock his opponent, is out of sight — weighed heavily on the Trump campaign.

President Trump’s bombshell announcement early Friday morning that he and the first lady had tested positive for the coronavirus has set off a frenzy in the White House and beyond as politicians and operatives who have interacted with Mr. Trump in recent days have raced to get their own tests and, in some cases, report the results.

Here is a quick look at the people in Mr. Trump’s orbit and beyond who have spoken publicly on Thursday and Friday about their health and the virus, taken from official statements, announcements made on social media, and spokespeople.

Who has tested positive:

Who has tested negative:

A coronavirus outbreak that infected President Trump and spread to the Senate has thrown a fresh element of uncertainty into the politically fraught fight over installing Judge Amy Coney Barrett on the Supreme Court before Election Day, with Republicans vowing to press ahead and Democrats insisting on a pause.

Pulling off a complex confirmation that touches all three branches of government in the four weeks remaining before the election always promised to be a daunting task for Republicans in the middle of a pandemic. But by Friday night, with the White House and Congress in turmoil and Senators Mike Lee, Republican of Utah, and Thom Tillis, Republican of North Carolina, among those announcing that they had tested positive for the virus, it was clear that the challenge had grown steeper. Mr. Lee and Mr. Tillis are both members of the Senate Judiciary Committee that would convene Judge Barrett’s confirmation hearings.

Top Republicans insisted that they would move ahead at an uncommonly swift pace to hold hearings on Judge Barrett’s nomination by Oct. 12, send her nomination to the full Senate by Oct. 22 and confirm her as soon as Oct. 26, eight days before Election Day — even if it meant breaking Senate norms and considering a lifetime judicial nomination by videoconference. But the latest outbreak raised the possibility that Republicans could lose their slim majority in the Judiciary Committee or on the Senate floor.

And it gave Democrats, who were already objecting to Mr. Trump’s push to install a new Supreme Court justice so close to the election, a new reason to call for a delay. Seeing a potential opening, top Democrats called for the Senate to pause and assess the scope of the outbreak. They declared that a fully virtual hearing for a candidate for a lifetime appointment to the nation’s highest court would be unacceptable.

“We now have two members of the Senate Judiciary Committee who have tested positive for Covid, and there may be more. I wish my colleagues well,” said Senator Chuck Schumer of New York, the Democratic leader. “It is irresponsible and dangerous to move forward with a hearing, and there is absolutely no good reason to do so.”

The senators, Thom Tillis, Republican of North Carolina, and Mike Lee, Republican of Utah, both of whom announced their test results on Friday, are among several people who have tested positive since attending the events last Saturday.

Others include Bill Stepien, Mr. Trump’s campaign manager; Melania Trump, the first lady; John I. Jenkins, the president of the University of Notre Dame; and Kellyanne Conway, the former top White House adviser, who left her post over the summer. Ms. Conway announced her positive result in a Twitter post late Friday night.

The Sept. 26 Rose Garden ceremony for Judge Barrett was most likely not a “super-spreader” event, because it was outdoors. However, many top Republicans attended without masks or social distancing, raising concerns that others might have contracted the virus but had not yet been diagnosed. And someone who was infected and did not have symptoms could have transmitted the virus to others during indoor discussions inside the White House.

Leading Republicans said they planned to continue “full steam ahead” to confirm Judge Barrett before Election Day. But Mr. Trump’s illness, along with the fact that Senator Tillis and Senator Lee sit on the Judiciary Committee, has raised questions about whether the party’s extraordinarily ambitious timetable could hold.

Mr. Tillis’s diagnosis also dealt a blow to Republicans’ hopes of retaining control of the Senate, given that he was already facing a difficult re-election battle.

Top Senate Democrats demanded on Friday that Republicans slow their plans for confirming Judge Barrett, saying that if Republicans were to proceed with hearings without an understanding of the full extent of the virus’s spread from the Sept. 26 events, an “already illegitimate process will become a dangerous one.”

Senator Chuck Schumer of New York, the Democratic leader, responding to Senator Tillis’s announcement on Friday evening that he had “no symptoms” but would isolate himself for 10 days at home, called on Republicans to delay the confirmation hearings.

“We now have two members of the Senate Judiciary Committee who have tested positive for Covid, and there may be more. I wish my colleagues well,” Mr. Schumer said. “It is irresponsible and dangerous to move forward with a hearing, and there is absolutely no good reason to do so.”

The confirmation of a sixth conservative-leaning justice to the court would be the culmination of a decades-long conservative project, an effort spearheaded by the majority leader, Senator Mitch McConnell of Kentucky.

Judge Barrett, 48, tested negative on Friday, a White House official said. Two officials with knowledge of her medical history said that she had already had the coronavirus and recovered earlier this year.

Judge Barrett was in close contact with Mr. Trump at the White House last weekend. She also worked closely with several White House officials and met with dozens of Republican senators on Capitol Hill, including Senator McConnell and Senator Lee.

A video posted on Twitter showed Senator Lee hugging people at the event. He said he had tested negative at the White House on Saturday.

It can take several days for someone who has been exposed to the virus to develop symptoms or to test positive. Anyone tested within just a day or two of exposure is likely to receive a negative result even if they are infected.

Senator Lindsey Graham of South Carolina, the Judiciary Committee chairman, said on Friday that his panel would begin four days of public hearings on Judge Barrett’s nomination on Oct. 12, as scheduled. Senator Tillis and Senator Lee said they would isolate for 10 days, which would enable them to emerge in time for the hearings.

In an interview on Friday, Senator McConnell suggested that the virus’s spread through Republican circles could mean that more lawmakers would participate in the hearings virtually. “This sort of underscores the need to do that,” he said.

But Democrats said that virtual hearings on such a consequential matter would be unacceptable.